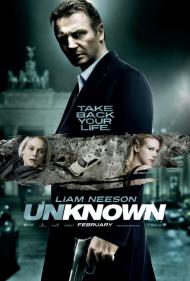 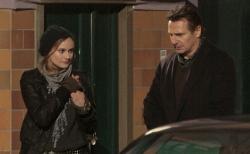 Mystery thrillers are always fun to watch as you pay attention trying to figure out what is going on.   When you watch one for the first time you never know how it will end.  It is the one movie genre whose entire goal is to pull the wool over the audiences eyes, until the end when it pulls back the curtain to reveal what is really going on, or who is actually responsible.  It is that crucial moment that makes or breaks the mystery.

Unknown opens with Dr Martin Harris and his wife arriving in Berlin for a conference.  Upon getting to the hotel, Martin realizes that he left his brief case, containing his ID and passport, at the airport.  Leaving his wife there, he gets in  a cab and heads back for it.  He ends up getting into a car accident and wakes up in a hospital with his memory slightly blurry.

He returns to the hospital he awoke in.  He tells the doctor, "Do you know what it feels like to become insane? It's a war between being told who you are and knowing who you are... Which do you think wins?"   A nurse gives him the name of a private investigator and Martin tries to find the cab driver who was with him in the accident.

Although mysteries are fun to watch, they are a pain to review.  I cannot talk much further about the plot as the fun is experiencing it yourself.  Once everything comes to light, it does almost make complete sense in a movie kind of way.  I question one particular aspect, but as I do not want to give away plot points, I will just say it is mostly satisfying.

At this point in his career, Liam Neeson is no longer an actor.  He has reached the height of a movie star who merely brings his presence to a film.  There is no discernable personality trait differences between Martin Harris and Bryan Mills from Taken.  Neeson speaks his lines in his distinct serious voice, and that is all we need.   Ninety percent of Neeson's talent is in his voice.   That is what makes him so good as Zeus or Aslan.   His voice commands attention.

Diane Kruger does not fare well.  She is German, thus speaks perfect German as well as English, yet she is playing an illegal immigrant from some other European country.   Her accent comes and goes so often I never knew what she was going for.  Likely her character in the novel, this movie is based on, is from outside Germany, but why did they not just change it for the film or hire another actress.  Kruger is the hottest German actress working today, but her voice work is not up to the challenge.

Unknown will keep you watching.  It has enough mystery and action that you will want to see how it all unfolds.  Depending on how much you buy into it, will determine how well you like it.  It came fairly close to answering all my questions, but not all. 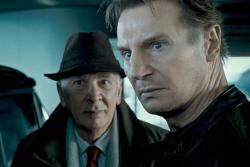 Eric, I’m not sure which question(s) Unknown didn’t answer for you. I thought by the end they had wrapped it up neatly enough. Oh and for the record Diane Kruger’s Gina tells Martin that her family was killed in Bosnia so clearly that is where she is supposed to be from. I agree that her accent is inconsistent.

The premise is intriguing and some initial suspense is built up, but the car chase scenes are unbelievable. Where are the German police during these extensive and prolonged chases through the crowded Berlin streets? And no matter what happens that damn van always manages to stay right behind them.

I am happy to see actors from my favorite television obsession Mad Men transitioning to the big screen. Jon Hamm was good as an FBI agent in The Town and January Jones does a decent job here as Mrs. Elizabeth Harris, most notably near the end of the movie after the plot twist has been given away. With her brittle blonde beauty she would have been a favorite of Alfred Hitchcock.

I never really cared about Liam Neeson’s Dr. Martin Harris. He is not that interesting of a character and his motivations after the big reveal are never examined or fully explained. Is that what you were referring to Eric? He does get that one big John Wayne/Clint Eastwood moment when he delivers a quotable, cheer-along line right before a big action scene.

The two most interesting characters for me were the old detective played by Bruno Ganz and Frank Langella’s Rodney Cole. Their scene together is the best written in the movie. Unfortunately they both have small supporting roles. Unknown is a decent suspense thriller but I was definitely expecting more bang for my buck. 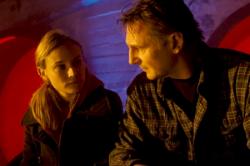 Patrick, you mention Hitchcock and clearly the makers of this film were trying for a Hitchockian vibe. And although they never come close to the master of suspense's level, they do manage to entertain. I was certainly never bored, even though there are several plot holes and I found Neeson's Harris to be rather a dull character. The mystery is strong enough that I was kept interested right up until the end.

I disagree with your assessment of the actors Eric. I thought Krueger was great, but Neeson seemed bored through most of it. Yes, he has a great voice, but he brings nothing extra to this part. It's not entirely his fault of course, the script doesn't give him much to work with, although part of this is because if the script gave too much away than the mystery wouldn't work either. I also felt that frankly, he was a bit long in the tooth for the part and they would have been better served with a younger lead. Krueger, on the other hand, made her part sympathetic and sexy. Someone should cast her in the next Bond film.

The ending does tie the mystery together in a more plausible way than I expected. It actually makes sense in a Hollywood kind of way, but there are a couple of plot holes in the script. As you say Eric, they are difficult to discuss, but suffice to say, two characters appear in person in a situation where an anonymous tip on the phone would have been better. There's some business with a bomb that makes little sense as well, but you'll have to watch it to see what I mean.

Along with Hitchcock, I was also reminded of Polanski's Frantic. Like that movie, this one is about an American in Europe caught up in over his head. This one is faster paced and packs more action, but like that one, it also ultimately fails to satisfy.