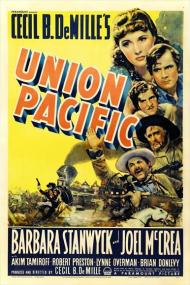 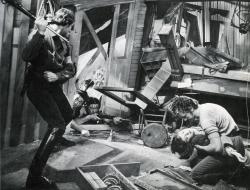 1939 has long been recognized as the peak year for the Golden Age of Hollywood. Those magnificent dream factories were churning out celluloid creations at an astounding pace. Movies from that year were bigger in scope than ever before, and they glittered with huge stars. The 1940s would see the beginning of the end for the studio era. First came the Second World War, followed by Congress's breakup of the studio owned theater chain monopoly, and by the end of the decade stiff competition from television. But for one brief, shining moment, at the tail end of the Great Depression, Hollywood reached its spectacular pinnacle. Union Pacific was Cecil B. DeMille's contribution to that glorious year.

Like everything DeMille did, Union Pacific was made on an epic scale. For his subject matter DeMille chose the building of the first transcontinental railroad in the United States. The movie features hundreds of extras and plenty of rip roaring action. There is a saloon brawl, Indian attacks on trains, and several exciting locomotive derailments all done with that signature over-the-top DeMille flair.

Barbara Stanwyck and Joel MacCrea star. She plays Molly Monihan, the very Irish daughter of a very Irish train engineer. MacCrea plays Jeff Butler, the man hired to maintain law and order among the hundreds of men toiling to build the railroad. He goes up against some bad men hired by a wealthy banker to sabotage the work being done. This banker having invested money in the rival Central Pacific Railroad that was being built East from California to meet up with the Union Pacific.

But the plot details don't really matter. This movie is all about the action that centers on a love triangle between Stanwyck, MacCrea and a very young Robert Preston. Preston and MacCrea were comrades in arms during the recent War Between the States and now find themselves competing against each other over the railroad and Molly. The story culminates in a typically melodramatic DeMille fashion.

The supporting cast includes Brian Donlevy as the leader of the bad guys. He makes sure the traveling railroad workers have a constant supply of liquor, poker and women. A young Anthony Quinn shows up briefly as one of his henchman. Scarlett O'Hara's little sister Suellen (Evelyn Keyes) has a small part as well, although Barbara Stanwyck completely dominates the picture as far as the women are concerned.

Paramount pulled out all the stops for the world premiere. DeMille, Stanwyck and MacCrea traveled by train to Omaha, Nebraska, where the movie opened simultaneously in three separate theaters. It drew 250,000 people to the city and FDR even got in on the act by pressing a telegraph key in Washington that opened the civic auditorium, thus launching the festivities, which included parades, radio broadcasts and a banquet. This was followed by a 15 day promotional trek across the country by an antique train stopping in 30 different cities.

I love B&W cinematography as much as any classic movie buff. However, Union Pacific is a great example of a movie that should have been shot in color. I can only imagine how stunning its many location shots and huge action sequences would look in vivid Technicolor. I think it's safe to say it would be better remembered today if it had been.

Union Pacific, although flawed, exemplifies why Cecil B. DeMille was one of the few Hollywood directors whose name above the title on a picture was as big a draw as any star. He had no artistic aspirations, he simply made movies to entertain the masses. And unlike many of his pictures, Union Pacific has the added benefit of a very solid cast. A cast that makes the rather tepid script much more palatable. DeMille did things on a grand scale and here he does for the Western what he had already done for the Biblical epic.