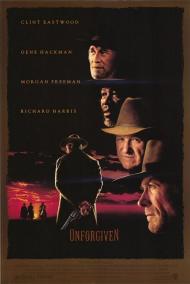 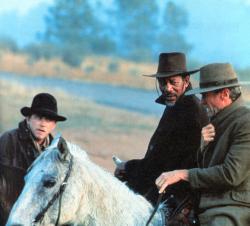 In 1992 Clint Eastwood saddled up one last time for this epic tale of revenge and justice in the Old West. Unforgiven earned Eastwood the Best Picture and Best Director prizes at the Oscars in 1993, a feat he would repeat 12 years later with Million Dollar Baby.

Sometime in the year 1880 in the small town of Big Whisky a cowboy cuts up a prostitute’s face in a fit of rage. When the local sheriff lets the man and his partner off easy the women of the brothel pool their resources and come up with an even grand as a cash reward for the capture and death of the cowboy that cut up one of their own.

Little Bill Daggett (Hackman) is the sheriff of Big Whisky. He enforces the law with an iron fist and a ruthless determination. Personal fire arms aren’t allowed in Big Whisky and Little Bill loves being tested in his resolve. When the conceited arrogant braggart English Bob (a showboating Richard Harris) arrives planning to go after the reward money, Little Bill demands his gun and then proceeds to kick the living shit out of English Bob, in front of the whole town. He figures that once word spreads this will dissuade anyone else from trying for the prostitute’s reward.

Clint Eastwood plays Bill Munny a reformed gunslinger and recovering alcoholic who has been living a quiet pig farmer’s life for the past ten years. He has two small children to raise and a beloved wife he buried a few years before. The farm is going to pot and so Munny is tempted into returning to his old ways by a young gunslinger calling himself “The Schofield Kid” and claiming to have already killed five men. He offers Bill half the reward money for killing the cowboy(s) that cut up the whore. Munny gets in touch with his old partner Ned Logan (Freeman) and they set off to earn the reward.

It’s clear from the jump that Eastwood’s Bill Munny is on a collision course with Hackman’s Little Bill. Watching the two of them face off makes for a riveting climax.

Eastwood’s Bill Munny is an older, wiser version of the character(s) he played in those Sergio Leone Spaghetti Westerns of the 1960’s. In many scenes Eastwood shoots himself in shadow, hat cocked over one eye and the gaunt features of his face peeking out underneath. Like John Wayne his stature and screen presence grew greater with age. Bill Munny’s life story is written across his weathered face.

The cast is impressive although Richard Harris and Morgan Freeman get short-shrift in screen-time. The best scenes go to Hackman, Eastwood and Jaimz Woolvett as the young gunslinger. Hackman won the Supporting Actor Oscar for his portrayal of the sheriff that takes sadistic relish in meting out punishment.

The emotional high-point, and the movies’ most famous scene, takes place after The Schofield Kid shoots a man and then admits to this being his first murder. He and Bill Munny have the following exchange…

The Schofield Kid: “It don't seem real... how he ain't gonna never breathe again, ever... how he's dead. And the other one too. All on account of pulling a trigger.”

Bill Munny: “It's a hell of a thing, killing a man. Take away all he's got and all he's ever gonna have.”

The Schofield Kid: “Yeah, well, I guess they had it coming.”

Bill Munny: “We all got it coming, kid.”

Unforgiven is Clint Eastwood’s masterpiece and one of the best Westerns ever made. 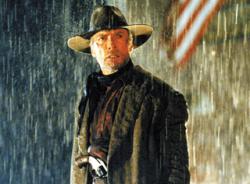 This isn't just a great Western.  It's a great movie, no matter what the genre. Eastwood and company made what seemed to be at the time, his crowning glory and a neat bookend return to his Western roots at the end of his career. He was after all, in his 60s and nearing retirement age. Who knew he'd still be going strong nearly two decades later?

Eastwood brings so much to this role. Take Hackman by comparison. He does a great job and truly deserved his Oscar, but you're seeing just Little Bill in his performance. With Eastwood, you are seeing an extension of Rowdy Yates, The Man with No Name and Josey Wales. Through Eastwood's past, we see Munny's past. Although to be clear, Eastwood is aided by his screen persona, but he doesn't rest on that. He gives one of his best, if a bit stoic, performances of his career. He was nominated for Best Actor, even though he did eventually lose to an over-the-top Al Pacino for Scent of a Woman.

Visually, the movie is quite beautifully shot. Weather is present and affects many of the scenes. And as you mentioned, Patrick, Eastwood makes good use of shadows. Those moments you mention with his hat pulled down over one eye, with his face half in shadow, are iconic.

My only real complaint is that certain plot elements don't really go anywhere. So much time is spent on English Bob that I truly expected that he would return at the film's climax. Was the character given more screen time because it was played by Richard Harris? Also, the biographer scenes are interesting at times, but they too don't really play out as expected. If the entire movie had been told from his point of view, I could see the reason for his inclusion more, but as it is, his scenes with Little Bill are interesting, but don't add so much to the story. We already understand Little Bill by that point.

Those few distractions are mere bumps in the road on this journey however and do little to take away from its greatness.

Eastwood handles the violence and the darkness of the story with a deft and sure hand. Munny is a former drunkard and a killer, but you still want him to succeed. This is partly because Eastwood doesn't try to hide his age and he makes Munny a human character. He has trouble riding his horse at first and he falls ill after riding and sleeping in the rain. Although the final gunfight shows that he's still got what it takes, you believe that he could do it, because, as Little Bill mentioned earlier, it's the man who can stay calm in a fight who more often than not wins over the faster shot.

A great Western and a great movie, made all the better by its director/star and the history he brings to it. 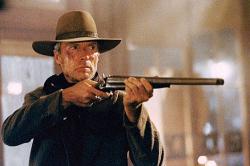 I know this is going to sound odd, but I felt sorry for the two cowboys who visit the whores at the beginning of the film.   Yes, one was a criminal, and it was wrong for him to cut up the prostitute, but the law set a punishment and he paid up.  The one cowboy who did not hurt anyone is even more of a victim than the cut prostitute.  His only mistake was to go to a whore house with a temperamental friend, yet he ends up being shot, and dies a slow painful death.

To me the real villain in the movie is Strawberry Alice.  At first you think she is just defending one of her own.  Later we see her need for revenge has very little to do with those two individual cowboys.  They were just the excuse she needed to get back at a world of men who have treated her without respect.  Kind of ironic coming from a prostitute.

When the two cowboys show up with the horses, worth hundreds of dollars, she turns down the extra one they brought for the cut girl.  She never even bothers to ask her if she wants it.  Alice clearly has some serious rage going on against men.  She makes this very obvious after a guy throws a rock through her window and she yells out at him, "HE HAD IT COMING! THEY ALL HAVE IT COMING!"

Again, let me be clear.  The cowboy was a complete sadistic asshole for cutting the girl up.  His crime though, did not deserve the punishment that Alice wanted for him and his friend.  She was the oldest of the prostitutes and had no doubt become tired of being treated as such.

That is the greatness of Unforgiven.  No one is the hero and no one is completely the villain.  Munny, Ned and the Kid are all out to murder two men who have never been sentenced to die by any court.  Bill comes across as the heavy but he is keeping the peace.  Sure, he is extreme in his measures, but Bob was an assassin and he did break the law.  The lesson of Unforgiven is that we all have good and bad within us.  It is only up to us to decide how it comes through.

Patrick mentioned the great dialogue.  My favorite is when Munny is about to shoot Bill, and Bill says, "I 'll see you in hell Munny."  and Clint Eastwood responds in a quiet tone,  "Yeah."

Scott disliked the biographer's screen time, but he does have a really good scene.  Early in the movie Bill tells him to pick up a gun.  You have no idea where that is going to lead.  Later, Munny tells the biographer the same thing.  Again creating a tense moment of unknown possibilities.  It also serves to show that Bill and Munny are not so different.

It is rare for Scott, Patrick and I to agree on movies, but Unforgiven is one hell of a great film!