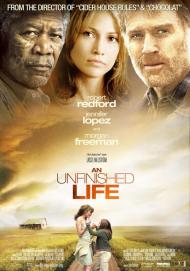 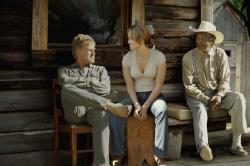 In the hands of less talented filmmakers, An Unfinished Life would be simple "movie of the week" stuff. However, with Robert Redford and Morgan Freeman both giving Oscar worthy performances and with Lasse Hallström (The Cider House Rules) directing, this movie rises above the melodrama of its simple plot to become touching and heartfelt.

Redford plays Einar, an aging rancher in Wyoming who never got over the death of his son nearly twelve years ago. Lopez is Jean, Einar's widowed daughter in-law, who shows up at his ranch one day with the granddaughter he never knew he had. Jean is running away from her abusive boyfriend and is willing to take shelter where she can find it, even with the man who blames her for the car accident that took the life of his son.

Although Einar and Jean are still at odds with each other, granddaughter Griff (played by newcomer Becca Gardner) has soon worked her way into the life of the ranch, enjoying a sense of home and family that she's never known before.

Also living on the ranch is Einar's best friend, Mitch (Freeman). A year ago Mitch was mauled badly by a grizzly bear and Einar has been caring for him ever since. As usual, Freeman is playing the wise old sage, offering advice in that deeply sonorous voice of his. It's a part that he's played before, but that he does to perfection anyway. Mitch and Einar have grown so close over their 40 years together on the ranch, that at first Griff assumes that they must be gay.

With Einar, Redford is given a chance to turn in his best acting performance in a very long time. His weathered features perfectly suit the character of rumpled cowboy, a seeming anachronism in the modern world. And at 68 years of age, he's still in good enough shape to believably pull off two fight scenes.

The only weak link in the cast is Lopez. It's not that she does a horrible job, but against Freeman and Redford it would take an actress of considerably more talent than her to hold her own. During one emotional confrontation between Jean and Einar when they finally talk about his son's death, Redford barely says a word, while Lopez attempts to emote all over the place, but it is Redford who holds your attention.

Because of the performances, it really doesn't matter that the story is fairly predictable. You can guess from the beginning that each of the characters will face down their own bear and grow from the experience. The reward is in watching them do it. 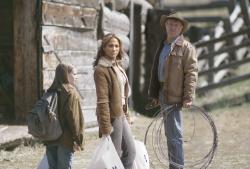 Jennifer Lopez and Robert Redford in An Unfinished Life.

An Unfinished Life is a standard melodrama with some decent acting. As my brother wrote Lopez is definitely the weakest link in the chain. She's fine when she has no dialogue. She possesses more screen presence than Madonna but lacks the chops for any scenery chewing. Some of her more dramatic line readings are pretty amateurish. This is made all the more painfully obvious by the superlative performances of the two old veterans. Even newcomer Becca Gardner acts circles around J-Lo.

The scenery is another thing the movie has going for it. Like Brokeback Mountain it is set in Wyoming and features similar ruggedly beautiful exteriors. It's easy on the eyes.

The story is touching just completely predictable. But I agree with Scott that the journey is far more important than the destination. Color this one a Comfort Movie. 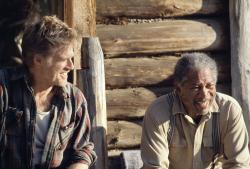 Robert Redford and Morgan Freeman in An Unfinished Life.

I think of An Unfinished Life like a remake of On Golden Pond. An old couple get visited by their daughter who has a child in tow. The old couple have issues with the daughter while the child breaks the ice and becomes friends with the colder of the two old people. Both films are set at scenic outdoor summer locales.

An Unfinished Life is full of symbolism. The bear being the most obvious. Each character has to get a "bear" off their back so as to get on with their life. Another one is when Einar yells at Jean that not everything can be as easily replaced as a broken plate. My favorite moment is when Gary provides an outlet for Einar’s pent up anger.

As both of my brothers wrote, Lopez is out of her league in this film. To her defense I have to note that she does have some horrible dialogue. When she tells the two customers that good people work at the restaurant I was baffled. Who talks like that? Jane Fonda held her own against Henry Fonda and Katharine Hepburn. Lopez looks unqualified to do a soap commercial, let alone act alongside Freeman and Redford.