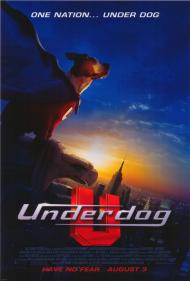 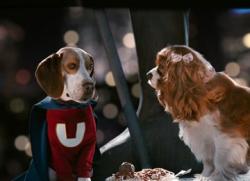 Jason Lee provides the voice of the super dog in Underdog.

The original cartoon was a campy joke. A dweebish dog in baggy clothes,fought crime with the less than encouraging catch phrase of, "There's no need to fear. Underdog is here." This was from the days of Adam West's Batman and cartoons like Hong Kong Fooey, the karate dog. Although this live action remake uses a few references from the cartoon, there is little here that actually resembles the original show's sense of humor.

I will make this real plot synopsis real simple. Boy meets dog. Dog gets napped by evil minion. Dog gets superpowers when evil scientist's chemicals fall on him. Dog becomes a super hero and does battle with evil scientist. There is a side plot with the boy's dad. He was an unjustly fired policeman, but is now a security guard, blah blah blah.

Where as the original cartoon went for jokes as Underdog destroyed as many things as he saved, thus his catchphrase was as a much a threat as a promise, this version just goes for "cute." Live action Underdog never stands on his hind legs. He simply looks like a nice little unthreatening dog dressed in one of those stupid looking Halloween costumes that owners, who think their dogs are children, dress them in. The worst aspect to this film though is the loss of Wally Cox. Jason Lee's voice is neither here nor there. He adds nothing to the part. Cox's annoying voice alone provided most of the humor in the cartoon. What was a gay sounding dog in baggy clothes flying to, hopefully, save the day has been turned into a nice little cute dog that inspires more aaah than hahaha.