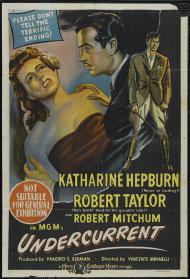 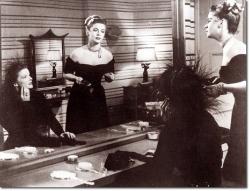 Undercurrent is a decent mystery/thriller that borrows key plot points from superior films. In 1944's Laura, a detective falls in love with a missing person that he has never actually met. Rebecca (1940) is about a woman who marries a rich man, moves into his house and discovers that he has a mysterious past that still haunts him.

In Undercurrent, Ann marries a rich man, Alan. She soon discovers that he has a mysterious past involving his missing brother. Ann begins asking questions and investigates what happened to the brother and in the process becomes a infatuated with the brother. Alan becomes quite agitated by Ann doing this. The more she snoops, the more unhinged Alan becomes. Eventually Ann begins to think Alan murdered his brother and that her life may be in jeopardy as well.

Undercurrent is a bit slow paced at first but it works well in keeping you guessing. In true film noir mode it twists and turns a couple of times. One mystery is solved because of casting alone. Minnelli directs well enough, but the pace could have used a boost of energy. Other than the end of the movie, there is really not much excitement to be found. More experienced mystery directors Otto Preminger (Laura) and, of course, Alfred Hitchcock (Rebecca) fair better in their films, but Minnelli makes a good effort.

Top billed Hepburn is the glue that holds this movie together. She takes the audience along as she reacts to everything going on around her. She runs the gamut of emotions as she goes from blushing bride to frustrated investigator to potential murder victim. Hollywood tradition is broken here. Usually the leading man is older than the leading lady. Here, Hepburn is nearly 5 years older than Taylor and 10 years older than Mitchum.

I have caught this movie a couple times late at night and it is worth a viewing. It lacks real tension for much of the movie, but if you want the full mystery explained you have to watch the whole movie.