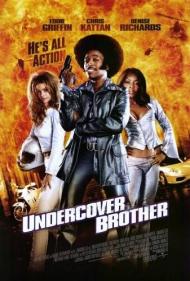 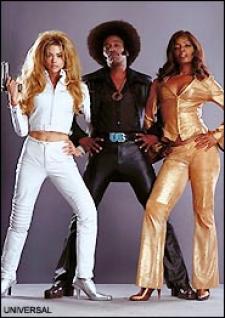 Undercover Brother is a hilarious send up of racism and conspiracies. It is politically incorrect, and not afraid to offend. It pays homage to the black American culture of the 1970s, while being quite current in topic.

A white racist organization known as "The Man" attempts to disrupt a black General, think Colin Powell, from running for the White House. The afro-ific Undercover Brother gets corralled into joining the all black secret agent organization known as The Brotherhood, to stop The Man. Okay, it is not completely black, there is Lance, the office token white.

Instead of a retina scan or a finger print check, UB must do an elaborate handshake before being allowed into Brotherhood headquarters. "Blackness confirmed." The computer informs him afterwards. Nearly every joke is race related.

UB lives up to his name and goes undercover as a "white acting" black man. To do this he is forced to watch some video streams of white people. It nearly kills him. "CAUCASIAN OVERLOAD! CAUCASIAN OVERLOAD! I see white people." He says after being taken off the machine. He also must learn to like Mayonnaise. The Man however, has a secret weapon known as "the Black-man's Kryptonite." aka, a beautiful white woman.

Although Eddie Griffin gets most of the laughs, Chappelle, as Conspiracy Brother, steals nearly every scene he is in. After UB says "Hi." Chappelle responds, ""Hi"? What you mean "hi"? Like "high yellow wanna be white"? "High" like the white man wants to keep us? Wait, you don't smell any weed on me, do you?" Conspiracy Brother lives up to his name, "What do you think? Things don't just happen by accident! Sometimes people - mostly white people - make things happen!"

This film is loaded with great one liners. My favorite joke in the entire movie is when UB asks, "You know what they say, behind every great black man..." and everyone in the room has a different hysterical punch line. Not every joke works, such as the elevator shoes, but enough do to make this one funny film.

I could make all kinds of references to Obama in my review here. I could go on about how the Republican party is even defended in one scene, by Smart Brother. You may be glad to know that I will not, because this is just to fun of a film to take seriously on any level. As UB says, "There are times for falling apart, and there are times for getting' funky. This is one of them funky times."