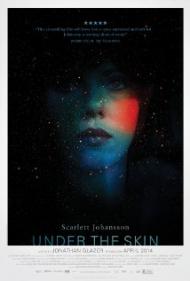 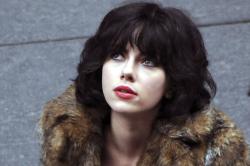 There are moments of brilliance in Jonathan Glazer's mystifying, and glacially paced, new movie Under the Skin. It contains several visually shocking moments, and it manages to create and sustain an atmosphere of absolute realism. Under the Skin is the third feature film from the director of Sexy Beast (2000) and Birth (2004). Based on the novel by Michel Faber it's about an alien that takes the form of Scarlett Johansson and preys on homely male hitchhikers in Scotland. Johansson's performance is mesmerizing. With her cold stare and complete lack of empathy, moving about uncomfortably in human skin, she had me convinced she was an alien being inhabiting a woman's body.

I did appreciate some things about Under the Skin but overall I didn't enjoy it. The basic plot is certainly not the problem. The problems are the overly artistic directing, the lack of dialogue, and the painfully slow pace at which the story unfolds. It's not surprising that Glazer made a name for himself helming music videos. Under the Skin takes a music video script and stretches it out to nearly 2 hours.

It is done in a very realistic, low key manner. Apparently the male victims in the movie weren't played by professional actors at all. They were just average blokes that Scartlett Johansson spotted and approached on the street. Luckily for the movie's sake they didn't recognize her. She struck up unscripted conversations with them while a hidden camera and microphone recorded the scene. It explains the nearly indecipherable accents several of the men speak with. You practically need subtitles to understand them.

Glazer, as the director, makes his presence known throughout the movie. He shoots from odd angles, makes seemingly random choices about mise-en-scène that pull you immediately out of the story (like keeping the camera inside a vehicle while the action takes place out of the audiences' line of sight), and he spends way too much time lingering on mundane images like windshield wipers, or the outside of a building, or trees blowing before a storm.

There is no reason why great art shouldn't also be great entertainment. Under the Skin had a shot at being both, but Glazer left out a sense of taut adventure or any dramatic build-up. Yes it captures a sometimes visceral mood but no movie can survive on mood alone. And it is also self indulgent and frustratingly vague on details. The inner struggles this unnamed alien encounters as it begins to “feel” human are examined. It is the one example of character development in the movie. "She" attempts to eat human food and have sex with a man. I wasn't fooled though. I never for a second doubted the intentionally obtuse, downer ending that I knew was coming. Yes there are moments of brilliance in Jonathan Glazer's Under the Skin but I wouldn't recommend it.

This is a very visual movie. It is paced very slowly, with long lingering shots of roads, trees blowing in the wind and endless scenes of Johansson driving a van around Scotland. Some of them are artfully done and at times the effect is almost hypnotic, but also quite soporific. The premise is intriguing and it's only the possibility that something might come of it that keeps your attention, but that attention is never rewarded.

As a gay man, I suppose Patrick can be forgiven for not mentioning the one thing that this movie will likely be remembered for in years to come. Or perhaps I should say the "two things" because this is the first time Scarlett Johansson has performed a nude scene for a film. In fact, she does several here, going completely nude several times, although shadow is used to insure that she doesn't do a genuine full frontal. This fact alone will be enough to give this film life on DVD and downloads, even if it is mostly watched with fingers poised on the fast-forward and pause buttons. She's not alone in her nudity as her male victims likewise strip down completely, with no shadows to obscure them at all.

The frustrating thing about this movie is that it could have been quite entertaining. It has an intriguing premise and a well acted central performance by Johansson. However, entertaining doesn't seem to have been a concern of Glazer's. He's more interested in setting up lingering artistic shots than something as base and ordinary as mere entertainment. And I'm not suggesting that it needed the Michael Bay treatment, just a little more plot, a touch more dialogue, and even perhaps a hint or two of explanation. The elements are already there for an entertaining film, they just needed to be brought out, but as I said, that's obviously not the angle Glazer was interested in pursuing.

Johansson does deliver a strong performance in the lead role. She's easily the best thing this film has going for it. Her development and inevitable ending are the only things in the film that generate genuine emotions. The fact that she shows her character's development without speaking a word for long stretches is a testament to her acting ability.

There are some nice moments here and certain elements will stay with you after the credits roll, but ultimately this experiment of a film feels like an unrewarding failure. 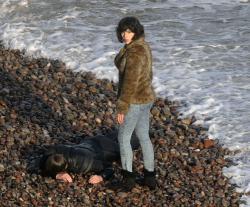 Scarlett Johansson in Under the Skin

I seemed to enjoy Under the Skin a bit more than my brothers, but I think that is because they watched it first. Only because I read their reviews and found other information about the book on line, was I able to understand what in the hell was going on in this surreal mess. As Scott wrote, it definitely needed more plot exposition. There is an interesting story here but as Patrick noted, Glazer was more concerned with his artistry than actually telling a story.

I applaud Scarlett Johansson for doing the nude scenes and not for titillation sake. Although most films can be made without showing breasts and genitalia, nudity does have its place in movies and can make an impact on a scene. Do not get me started on Blake Lively’s clothed sex scenes in Savages (2012). Here it makes sense that this alien creature be comfortably naked in that first scene as she is wearing skin as if she were dressed. The alien is not nude. Later, she looks in the mirror out of curiosity as to why men find it attractive. Both nude scenes were not out of place or obnoxious. On the other hand, only Glazer knows why he decided to show us the Scottish guy’s penises. The point of their nude scenes would have been just as effective shown from the back but not as in your face as showing them with an erection.

As Patrick wrote, the men Johansson talked to from the van were spontaneous flirtations by the actress. It provides some of the most interesting scenes in the movie. I think I could watch a television show that featured famous people in different locations interacting with non-famous folks and seeing the reactions of both the nervous celebrity and the recognition on the face of the bystander. Oh, and Patrick, I did use subtitles to understand the Scottish blokes.

Both of my brothers complained about how Glazer lingered on objects and images that did not advance the plot. I agree they were excessive but I did find myself transfixed by one shot of a wave crashing into some rocks, causing a spray of water and mist to form into a spiral. Glazer has some decent moments in this movie. The scene where the woman swims out after her dog, that has been carried away by the tide, and the subsequent results of it all is riveting. The coldness of Johansson’s actions and the leaving of the baby on the beach are disturbing.

The film’s biggest problem is that Glazer never explains why, so I will. This “female” and her “male” motorcycle driving partner are aliens collecting human males to be consumed on their planet. That small bit of info should have been given to audiences at the beginning of the film. The way Glazer went about this movie was to leave everything up to guess work and confusion. Did he think that was the way to go or does he not have a clue about how to tell a story? Either excuse works but neither makes the movie any better. 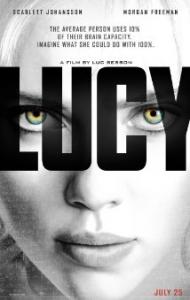