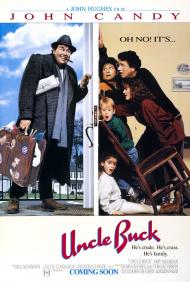 Uncle Buck is a feel good comedy from writer/director John Hughes. It stars John Candy in the title role as the slovenly but kindhearted uncle who agrees to babysit his brother's children while his brother and his brother's wife are out of town dealing with a family emergency. Uncle Buck bonds immediately with the two youngest kids Miles and Maizy but is quickly engaged in a battle of wills with his oldest niece Tia. She's fifteen and going through a rebellious phase.

This is the movie that put nine year old Macaulay Culkin on the map. His most famous scene is where he interrogates Uncle Buck by asking him a string of questions. It ends with him saying, “I'm a kid - that's my job.” Within a few years Culkin would be the most successful child actor in Hollywood since Shirley Temple. Although she would go on to a more modest movie career, Gaby Hoffmann is equally precocious as Maizy, the youngest of the Russell children.

The real meat of the story concerns Buck's relationship with Tia. He is able to understand her and deal with her in a way her parent's can't. And, more importantly, he understands the mind of Tia's boyfriend Bug. He tells Tia that Bug is just looking for sex. She sarcastically asks how he knows that and the wise Uncle Buck replies, “When I was his age, I was a guy zooming girls like you. Pretty face, good chip on your shoulder.” He isn't afraid to cause a scene in order to embarrass Tia into behaving and following his rules. By the end of the movie of course they've become fast friends.

Buck also provides much fun for the younger Russell kids. He makes huge pancakes for breakfast (see photo) and later deals hilariously with an inebriated clown. There really isn't any situation Uncle Buck cannot handle. John Candy was a brilliant, brilliant comic. He was always so likable even when acting selfishly. He was also able to create pathos like the great silent clowns. You really feel for Buck whenever his feelings get hurt. And watch his timing on the phone when he can't finish a sentence.  It's masterful.

Candy's natural talents are enhanced by John Hughes' script. He wrote great dialogue and could be both heartwarming and bitingly funny in the same conversation. In one scene Uncle Buck goes to speak with an assistant principal at Maizy's school, a woman with a large, ugly mole on her chin. After Anita Horgarth (the assistant principal) tells Buck that Maizy isn't applying herself enough in class Buck tells her, “I don't think I want to know a six-year-old who isn't a dreamer, or a sillyheart. And I sure don't want to know one who takes their student career seriously.” Before exiting the room he delivers the movie's funniest line, “Take this quarter, go downtown, and have a rat gnaw that thing off your face! Good day to you, madam.”

Uncle Buck is a classic 1980's comedy by that decade's quintessential Hollywood filmmaker. It provided John Candy with the most iconic role of his career and helped launch Macaulay Culkin into superstardom. Amy Madigan and Laurie Metcalf are both good in small roles. On a personal note, this movie always reminds me of my oldest brother Tony. It is one of his favorite movies and he has always been a bit of the “Uncle Buck” in our family.

John Hughes was one of the best at combining comedy and sentiment in films. In his best films, he could make some of the most overdone sappiness and make it palatable by balancing it with laugh out loud humor. Uncle Buck, while not his greatest film, is a perfect example of this style of filmmaking.

Much of the humor in the film is provided by Buck's relationship with the two youngest kids. Culkin is a scene stealer as Miles. His antics here are a precursor to his work in the Hughes penned Home Alone. Gaby Hoffman is adorable as little Maizy. Her career wouldn't have the skyrocket arc of Culkin's but in 1989 she was having a very good year with this film and Field of Dreams where she again appeared with Amy Madigan.

The heart of the film comes from Buck's dealing with Tia, played by Jean Louisa Kelly. Tia is defensive and guarded, but Buck manages to win her affection by sheer persistence and by giving her the attention she so clearly desires. This would be Kelly's biggest film role, but she has worked steadily ever since including parts on Broadway and a starring role on the sitcom Yes, Dear, which ran for six years on CBS.

As good as the kids are though, this is John Candy's movie. Candy had worked with Hughes previously on Planes, Trains and Automobiles and the two obviously worked well together. One of Candy's great talents is one that Patrick mentioned. No matter how slovenly or irresponsible, he always remains likable. It's no wonder that he gets along so well with the little children when he seems like a child himself at times. This is by no means a drama, but Candy manages to convey in a few small moments some genuine emotion that gives the film its heart.

There was an aborted attempt in the 1990s to turn this film into a television series, but without the participation of Candy, Hughes or any of the children from the film. Predictably, the series was a flop. It was crazy to think it could be anything else when you've removed the things that made the original so special in the first place. 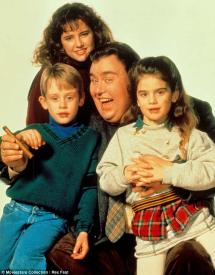 I first saw Uncle Buck years ago with my wife. We found it to be a very heartwarming family friendly comedy. Watching it today, I still enjoyed the lighter moments but was much more struck by the details of the family dynamics.

Buck is not at all close to his brother’s family. Clearly Bob and Buck used to be close. When Bob needs help he thinks of Buck. When Buck gets the call he does not hesitate to help. The problem is that Bob’s wife Cindy and Buck do not get along. The movie never explains why but it seems to have been a long time in the making. Can you imagine how difficult it is to have your wife and brother, both of whom you love, not get along?

Another issue in the family is that Cindy and her daughter Tia cannot see eye to eye. Tia resents her parents because she feels that they moved them away without considering her happiness. She believes it is because they got better paying jobs. The movie is told from hers and Buck’s perspective, so we do not always learn all the details.

Buck unintentionally acts like a therapist for the family. He does not put up with Tia’s teenage attitude. It is not that he understands her better than her parents, they were teenagers once as well, it is that he takes the time to listen to her. Tia is unhappy with decisions her parents have made, giving Buck the challenge of teaching Tia that the world does not revolve around her. Basically, by showing her that he cares, she learns to care about others.

The result of Buck taking care of his nieces and nephew impresses his on again/off again girlfriend Chanice. Whereas she always found him unreliable, his dedication to his extended family shows her just how loyal and amazing a person he can be. Buck not only helps his brother’s family, he helps himself.

Although it is not the point of the film, I would have personally liked a scene where Buck and Bob share a moment at the end. Bob knew it was going to be an issue between him and his wife to have Buck babysit. Buck coming through for them is clearly the beginning of a new understanding with his sister-in-law and a closer relationship with Bob.