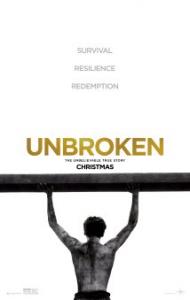 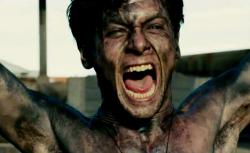 Most of us will live ordinary lives, unnoticed by everyone outside our circle of friends and family. Others, like Louis Zamperini, find themselves in the spotlight and living lives worthy of a book and movie. He lived through history, participating in events amplified by time.

Louis Zamperini grew up in a poor, working class Italian/American family. As a child he got into all kinds of trouble until the police and his older brother Pete pushed him into running. He joined the high school track team and eventually became an Olympic runner, participating in the 1936 Berlin Olympics. According to the book this movie is based on, written by Laura Hillenbrand, Zamperini claimed to have met Adolph Hitler and stole a swastika banner from the chancellery building. There is no mention here of either event.

His plans to participate in the 1940 Olympics were ended when World War II started. Zamperini instead found himself on a bomber in the pacific theater. He spent 47 days adrift on a raft in shark infested water with two other crewmen before being captured by the Japanese and sent to a prisoner-of-war camp.

At the camp, Zamperini was singled out because he was known for his participation in the Olympics. He also seemed to be picked on by the Japanese camp commander for some personal reasons on the commanders part. In fact, the story almost makes it seem as if he was obsessed with Zamperini.

I do not want to belittle his sacrifice, but like his story about meeting Hitler, I wonder how much of his experiences have been exaggerated by time. After refusing to be a propaganda voice on Japanese radio, the camp commander forces every prisoner to line up and hit Zamperini in the face with their fist. The dramatic climax of the camp commander forcing Zamperini to hold the board above his head also seems a bit dramatized. Zamperini is shown being very weak and hobbling on one foot. He can barely walk or stand yet is still able to hold this board up for an extended period of time, impressing the other prisoners as well as the sadistic Japanese officer. It is intended to be his last great act of proving he is unbroken, but I felt Jolie dragged it on a bit too long.

Zamperini’s story has been floating around Hollywood for decades. Even a young Tony Curtis was once attached to the project. Jack O'Connell does a competent job in the lead role but he never drew me that far in. As the company commander in charge of the POWs, Takamasa Ishihara plays an almost feminine acting Japanese sadist. I mention his lack of masculinity because at one point it almost seems as if he has frustrated romantic feelings for Zamperini.

The story of Louis Zamperini is one of survival and is very life affirming. How can any of us complain about our problems after watching him suffer so greatly. The fact that he came through it all and went on to forgive those who trespassed against him show what a truly great person he was. Exaggerated or not this is an entertaining and engrossing movie. 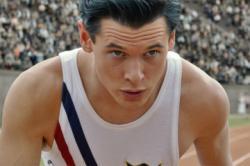 I don't think it's a spoiler to mention the ending since Eric has already done so and since this is a well documented true story. With that in mind, I just want to say that I found the final scene of this film, which shows the real Louis Zamperini carrying the Olympic torch at age 80 through the streets of Japan, to be more moving than all the scenes that came before it. Although all that comes before it is based on a true story, it feels very Hollywoodized, where that final moment feels truly genuine.

The problem with this film is that it's nearly 2 and half hours of relentless torture. Zamperini is put through hell nearly every step of the way. First during the time on the lifeboat and then again and again in the camp. It starts to feel sadistic. The first half of the film is intercut with flashbacks that show Zamperini's youth and his time in the Olympics, which is quite interesting. I would have preferred either 20 minutes less of the movie or less of the torture and more glimpses of his life after the war instead of just a few captions at the end that explain what happened to him.

Eric mentioned that Watanabe is played almost femininely, but the truth is none of the men are exactly rugged looking. Before being captured they all look a little too groomed and metrosexual. And you'll notice that after they are shipwrecked and held prisoner, no matter what the conditions, none of them seem to grow anything more than a few fluffs of designer stubble. It's too widespread among the cast to not be deliberate. I can only assume it was a choice of Jolie's.

Despite the film's few flaws, I agree with Eric that central story and character of Louis Zamperini is so very inspiring and life affirming that it can't help but keep your attention. However, without showing the second half of his life, where he forgave those who held him prisoner and returned to Japan, the story feels incomplete.

For months prior to its release the film had been receiving awards buzz. Its story seemed exactly like the sort of thing that the Academy loves to reward. However, following its release that buzz has died down a bit. At times it seems to be trying too hard to be exactly the kind of movie that would attract awards. Personally, I can't think of a single category where I would reward it over another film. It's good, but it's not great.

Unbroken could have been a great movie. Louis Zamperini's incredible life story has all the ingredients for a classic motion picture. Unfortunately Angelina Jolie's direction falls short of his story's potential. The movie starts strong. I enjoyed the way she told the young Zamperini's story in flashbacks interspersed with his time as a bombardier in the war. The plane crash in the ocean is excitingly staged and filmed and the 47 days spent on that life raft makes for riveting viewing. However, once our hero gets rescued/captured by the Japanese the director loses her way.

The film's second half stumbles badly and never completely recovers. The big emotional payoff that is supposed to occur when Louis holds that heavy wooden beam above his head never happens. From what I've heard this scene is very emotionally powerful in the book but something about the way Jolie stages it for the screen lacks the big gut-punch it should have produced. At this point in the movie the audience is already exhausted from all the deprivation and the many beatings Zamperini has had to endure. Enough is enough. Like Scott I was hoping for more of his life after the war.

I don't think Watanabe had romantic feelings for Zamperini. Nor do I think if he did have romantic feelings for Zamperini it would have anything to do with his masculinity or lack thereof. But in later years Watanabe did freely admit to deriving sexual pleasure from his sadistic treatment of POWs. If anything Jolie has downplayed his atrocities, which were hardly limited to his treatment of Louis Zamperini alone.

The cast is solid. Jack O'Connell is quite good in the physically demanding lead role. He plays Zamperini as an average Joe who just happens to be an Olympic athlete, and a man with a very strong will to survive. Takamasa Ishihara has the difficult role of playing the sadistic Watanabe. Ishihara pulls it off and even manages to convey some of the pressures that helped turn him into this monster.

I don't think it's fair to assume that Zamperini's story has been exaggerated. What he endured and survived is a matter of record, why quibble about the details? How many of us could have lived through what he did and remained Unbroken?