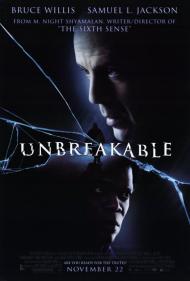 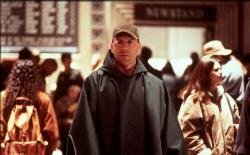 Any sophomore effort is overly critiqued and scrutinized. Especially when the freshmen project is as successful as M. Night Catalan's Sixth Sense, a movie that was truly great, unique, and with a great hook at the end. However, even taking all due kindness and consideration to that fact into account, Unbreakable, M. Night Catalan's new movie, disappoints in almost every sense of the word.

What makes this movie so truly disappointing is that it could have been great. The premise was intriguing and the cast stellar. It is in the execution, the dialogue, and the pacing where the movie falls through.

The plot, and don't worry, I won't give away the twist at the end, is basically an adult comic book. Bruce Willis plays a man who is literally Unbreakable. Nothing can harm him, well only one thing can, but you'll have to watch the movie to find out what, and he is incredibly strong. He also possesses the ability to sense things about people by touching them. Somehow, and this is one of the most implausible things about this movie, he never realizes or appreciates the powers he has until he is involved in a train wreck and is the only survivor.

Samuel L. Jackson plays a man with a bone disease who is the complete opposite of Willis's character. His disease makes his bones incredibly brittle, so brittle that his arms and legs are broken when he is born. Because of his infirmity, he develops his mind and his imagination. He owns an exclusive art gallery. One that only deals in comic book art. Something he takes very seriously. He has spent his whole life searching for a hero. When he hears of the train wreck with its sole survivor, he's sure that he's found that hero.

Most of the movie involves Jackson's attempts to cajole Willis into accepting who he is and to take on the mantle of super-hero. The movie drags on and on as Willis struggles to accept his powers. The drab gray colors the film is shot in, adds to the heavy weariness of the movie. It's interesting that one of the few bright colors in the movie is the light blue jacket worn by the director in his cameo appearance. No one smiles, the humor is almost non-existent. The pace is equal to a snail's.

I might have been able to accept the slow pace if only the payoff at the end of the film was good enough or big enough. It is not. The climax is brief and hardly worth the effort to sit through. And then, after the climax, tacked on like a necessity and feeling completely contrived, comes the trick ending.

Of the cast, only Samuel L. Jackson comes across well. His character is the most interesting and offers the few glimpses of humor that the movie shows. It may also be that the dialogue sounds better from him, because as a comic book collector, it is more natural that he talk like a comic book character. Robin Wright Penn is completely superfluous to the plot and her inclusion simply drags the pace down even more. Which is a shame for such fine actress. Bruce Willis is in his serious mode here, but displays little of the acting range that he showed he was capable of in 12 Monkeys.

M. Night Shyamalan tries to create a style for this movie with several trick camera shots. However, most of them are so obviously put in just for their own sake that any impact they might have, is lost. As writer, producer, and director of this movie, it seems that he has too much power. Someone else should have stepped in and edited this movie down. At least the pace would have been quicker.

The plot to this movie might have made an interesting hour long episode of the X-Files, but, at least with it's pacing, it can not sustain itself for a full length motion picture. 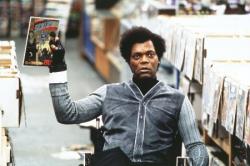 M. Night Shyamalan starts from the opening scene to create a mysterious and suspenseful mood. Although, as Scott mentioned, the pace is very relaxed, this movie does manage to be intriguing. The look and overall style however, is so similar to Sixth Sense that it can only suffer from the comparison. I found myself half expecting to hear Bruce Willis' son say 'I see dead People'.

My brother has pretty much summed up my opinion already, all I can add is what I think would have made this a better or at least more entertaining movie. First of all give Samuel L. Jackson more scenes, he really is the most interesting character and yet he has relatively few scenes with Bruce Willis. I appreciate the director not wanting the action to be too much like a comic book, but a little more of it would have gone a long way towards redeeming this film. And how in the hell did Bruce Willis not realize he could bench-press 350 pounds? Of course he should already have been aware of his gifts, and it shouldn't take finding a card on the windshield of his car which asks him how many days he's been sick in his life to make him start thinking that maybe he has special powers.

I do recommend this movie if you are an adult comic book collector. There are a few humorous moments that can be appreciated and the premise itself is brilliant even though the execution of it is only mediocre. 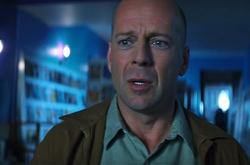 September 14th 2001, I found myself in need of a few hours of escape from the news. I had seen those planes crash into those buildings at least a hundred times. All the networks were carrying the same terrorist information so I rented a DVD.

I chose Unbreakable, only because my fellow Movie Buff brothers had already reviewed it. They have gone into the plot already, so I will skip to my opinion.

The director has an artist's eye. There were scenes where I noticed the camera movement, there was the depressing colors, the shining jacket that Scott pointed out. There was the parka with security written on the back that Willis wears when he is in superhero mode. It resembles a cape as he moves. All this proves that this is a director with an eye for visuals. But who gives a shit!

I wanted to be entertained! Finding symbolism in a movie is supposed to come out afterwards when you think back on the movie. I was so damn bored I kept looking for something to interest me. Noticing camera movement just reminded me I was watching a movie.

The scene where Elijah refuses to leave the comic book store was unnecessary. Could he not just have called up Willis's character and told him of the book. Why did we need to waste 5 minutes watching him come across it?

Now back to recent events. The ending of this movie was a bit more startling for me than it would have been seeing it when my brothers did. It turns out that Elijah...Oh, its not a good movie but I hate to spoil the ending.

Drink plenty of caffeine before watching this one.