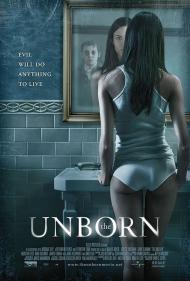 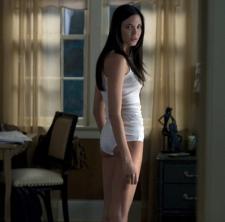 Odette Yustman parades around like a poor man's version of Megan Fox.

Just a couple of years ago remakes of Japanese horror films were all the rage, with The Ring and The Grudge leading the pack. Although The Unborn isn't a remake of a Japanese film, it certainly feels like one. It tries to recapture the same eerie feeling as those earlier movies, and while, at first at least, it succeeds in a small way, it quickly runs out of steam.

Odette Yustman, whose only other starring part was in 2008's Cloverfield, plays College Student Casey Beldon. As the movie starts Casey has begun having strange dreams about children and dogs with human faces. A neighbor boy she's babysitting starts acting creepy. She hears noises in the night and her left eye has begun to change color. "Some people are doorways" and "He wants to be born now" are two strange messages that she receives. All of this buildup is the best part of the movie. It's genuinely creepy and there are several good 'jump' moments.

Once the movie starts having to explain what's going on it begins to lose its way. Without giving away the few surprises this movie has, I'll just say that the plot involves Jewish mythology, evil spirits, Nazis and Gary Oldman slumming it unconvincingly as a Jewish Rabbi trying his best to channel Max Von Sydow. All of it is complete tosh and destroys pretty much all enjoyment and instead sets itself for a climax that is short and over-the-top. Of course it ends with the possibility of a sequel, but why anyone would want to watch one is beyond me.

Clearly the biggest problem here is the writing. The script's biggest mistake is trying to make sense. Only at the beginning of the movie when you don't know what's going on is the movie enjoyable at all. It also fails to create any real characters. Casey, her boyfriend and her best friend are all young and attractive, but without any real personality traits.

There isn't even much nudity, sex or violence to help fill the time. Casey spends some time in her underwear but that's about as titillating as it gets and only at the very end is there any real action. About the only thrills are some of the surreal imagery, but much of it is stolen from previous and better horror films with The Exorcist being the most obvious example.

Filled with cliches and gaping plot holes this is a fairly generic horror film whose only real blessing is that it clocks in at a remarkably short running-time of less than an hour and a half.