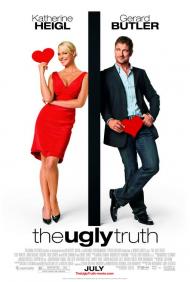 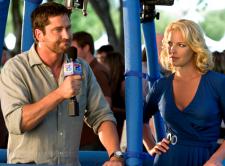 The screeplay for The Ugly Truth was written by three women. As such, you just know the female character will get a fairer depiction than the male.

Heigl plays Abby, the stereotypical romantic comedy girl. She is beautiful, sweet and genuinely kind to every one around her. So of course she cannot find love. She is a producer on a news show. She handles problems and runs the entire place with efficiency, intellect and poise.

Butler plays Mike as the stereotypical romantic comedy guy. He is handsome and sexist. Mike has a late night television talk show called The Ugly Truth. He gives relationship advice to callers. His opinion is very narrow minded. I cannot imagine what he could say differently on more than one show, since his answer to every question is that men just want women for sex.

To Abby's annoyance, Mike gets a job doing a segment on Abby's news show. They make a bet that if he can get her into a relationship with her neighbor Colin, he will stay on, but if he cannot, he will quit. The idea being that he will tell her how to act in a way that men find attractive. His first sage comments are about her clothes, "You're all about comfort and efficiency!" "What's wrong with comfort and efficiency?" She asks, to which the love guru responds, "Well nothing, except no one wants to fuck it."

His ideas are mostly juvenile and none to original. He basicaly tries to turn her into a mindless bimbo. He tells her to never criticize Colin, make her hair long, always agree with him, show off her breasts, slowly eat a hotdog. His advice is mostly crude thoughts that a drunken frat boy seeking a one night stand might find interesting. Colin is a doctor. As played by Winter, he is good looking, with six pack abs. He probably gets more action than most men. Finding someone to lay is not something someone like him likely struggles with. Her lame flirtations work only because the script says they do.

The movie spends most of the time on Heigl. Sure she is easy on the eyes but the heart of the movie is that three people are falling in love, not one. Any scene with her girlfriend should have been cut to allow more screen time on her relationships with Mike and Colin. The moral of the story is that everyone needs to be themselves, and everyone needs to see people for who they really are. A scene at the end has Abby tell Colin the truth, but since the movie kept that relationship in the background, it carried no emotional weight.

Mike and Abby of course end up together, This is a romantic comedy, I am not giving any thing away. Again, I felt nothing when it finally happened. Mike turned out to be a romantic chicken shit, who talks relationships down because a bunch of women have broken his heart over the years. His character supposedly grows while Abby remains the same person. As written by the female writers of this movie, Men only want women for sex objects until they fall in love, and then they magicaly change into that sensitive love struck moron. The only thing Abby learns is that everything Mike said was wrong.

Nicole Eastman came up with this story, and shares screenplay credit with two other women. I am not sure how old she is, but her opinion of men makes her seem very immature. Someone needs to make romantic comedy that is written by a man and a woman. It may be the only way to give both sexes an honest, mature portrayal.