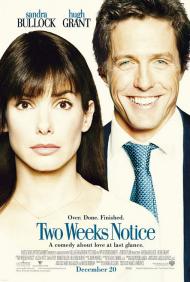 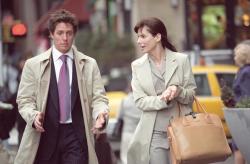 So much of a romantic comedy depends upon its two leads.  Are they likeable?  Do you care if they end up together?  Since you know they will end up together, can they make their road to romance entertaining enough for you to sit through until the inevitable kiss and swelling of music?  These are the questions you ask when viewing a romantic comedy.

Since this is true, all you have to ask yourself is, "Do I like Hugh Grant and Sandra Bullock?"  If the answer is yes, then you will enjoy this movie.  If no, I don't think this movie is great enough to transcend your dislike, since both actors are playing their stock character here.  Sandra does her charming all-American girl next door, and Hugh plays the charming, eccentric Englishman.

The setup is quite simple.  Sandra plays Lucy Kelson, a liberal lawyer who is continuously fighting for lost causes.  Hugh Grant plays George Wade, a playboy entrepreneur, who is often on the winning side against the causes Lucy is battling.  They meet face to face when Lucy offers George a guaranteed building contract if he will promise not to tear down a community center in the process.  George not only agrees, he offers her a job merely on a whim.  Hoping to do good from the 'inside', Lucy accepts.

Time passes and George begins to rely on Lucy for every possible decision, calling her at all hours for help with even the simplest problem.  Frustrated beyond endurance, she puts in her two-week notice.  But when the time comes for her to hire her own replacement, she starts to realize what she'll be giving up.  And when her replacement starts flirting outrageously with George, she realizes that it isn't just the work that she'll miss.

Although this movie is romantic and funny, it suffers from a problem that a great many romantic movies suffer from, and that is a lack of two equally developed characters.  Since these movies are aimed at women, and in this case produced by a woman (Sandra Bullock), the female character is strong and fully realized.  Where as Hugh Grants' character is weak, going from being ruled by his brother to being ruled by Lucy, and pretty two-dimensional.  For a love story to reach classic status both of the people in the relationship have to be real characters.  I can use no better example than the modern classic; When Harry Met Sally.

Light, fluffy, and enjoyable while you're watching it, Two Week's Notice will be gone from your memory in less time than that. 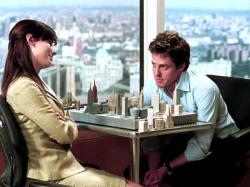 I would have loved to have seen Grant's character teach Bullock's character a lesson in simple economics. If her character is so poor, how did she ever pay for Harvard? If she hates capitalism so bad then where do these people work that she helps at Legal Aid? They probably work in buildings where some rich person created a job for them. Who pays her salary at legal aid? It is paid through taxes that are generated through businesses.

Bullock's character straightens out the selfish capitalist pig, but at no time does Bullock's naive, liberal politics' ever get questioned. Like Scott wrote; only her character is fleshed out. If he could have changed her as well, then this movie may have been a better love story. Remember, in Pretty Woman, how both character's better themselves by knowing each other. This movie is so one sided, it seemed unfinished. 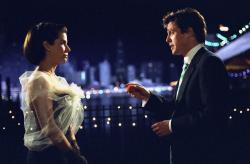 Two Weeks Notice is an innocuous little rom/com that never rises above the level of slightly amusing. The title, which implies the events of the movie are all going to take place over the course of a fortnight, is misleading. It isn't until the final third of the story that the titular time frame comes into play. Scott mentioned When Harry Met Sally and it's an apt comparison. Ever since that movie many romantic comedies copy the idea of having a man and woman be best friends.  They know each other inside and out and can finish each others' sentences and then one momentous day they realize they're in love. Usually there is a scene that clearly illustrates the progression of their feelings. Two Weeks Notice is missing this scene. It tells us they are in love but never shows us.

A big part of the problem is the absolute lack of chemistry between Bullock and Grant. Individually they are both quite talented and, as my brothers mentioned, they have such well defined stock characters that putting them together in a romantic comedy looks like a great idea on paper. But onscreen they just don't mesh. As a couple they lack appeal. She's too hard and he's too fussy. Sandra Bullock needs a more overtly masculine type to play off of and Hugh Grant doesn't exactly fit that bill. Their romance is more fizzle than sizzle.

Looking back there is one historically important aspect to this movie. At Sandra Bullock's insistence it was shot on location around New York City instead of using the cheaper Toronto as a stand in as originally intended. It was filmed just one year after the attacks of 9/11 and it helped revitalize the local economy and was instrumental in getting other productions to begin filming in New York again. The Mayor even honored the cast and crew by naming December 11, 2002 “Two Weeks Notice Day”. There are some great aerial shots of Manhattan in the scene where Bullock and Grant take a helicopter ride by the Chrysler Building.

Yes, the story is told more from Lucy's point of view than George's but to be honest neither character is really all that fleshed out. And I don't think they favor the liberal mindset as much as Eric complains they do. At the end of the movie George hasn't really changed his values. Sure he saves the building on Coney Island but then what romantic comedy doesn't conclude with a predictable happy ending? And they are still rich by the way. As George jokingly tells Lucy, “I'm now poor. When I say I'm poor, I mean we may have to share a helicopter with another family.”