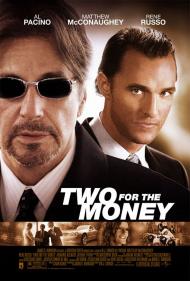 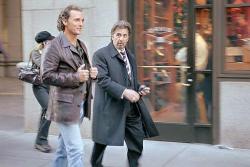 Matthew McConaughey and Al Pacino in Two for the Money.

You'd think that high stakes betting on sporting events would be exciting. I've never bet on a game in my life but I can see how it could be thrilling. The tension as you wait to see if you've backed the right team, pitting your knowledge against the world. Therefore you'd hope that a movie all about high stakes gambling would manage to capture some of that excitement. Watching Two for the Money (which is a movie about just that) however, is as dull as betting on which of two colors of paint will dry faster on a wall.

Matthew McConaughey stars as Brandon Lang, an ex-jock with left over "daddy didn't love me issues", whose promising football career was cut short due to an injury in college. Since then he's taken a job as the sportscaster on a 900 number service in Las Vegas, providing his predictions to callers who want to know who to back in the next big game. He's so good at his job that the big time comes calling in the form of Walter Abrams (Pacino), the operator of a major betting consultation service in New York City.

Abrams flies Brandon to New York, fixes him up in an amazing apartment in Brooklyn, and proceeds to turn him into his star prognosticator and salesmen. Together they create a new persona for Brandon. He goes from "Aw shucks" country boy (where'd he get that southern accent from when he grew up in Vegas?) Brandon, to super slick John Anthony. Actually, that's just want the filmmakers are trying to do. His John Anthony persona is hardly different from his Brandon personality. They're both still Mathew McConaughey's one and only character, one of them just wears nicer suits and slicks his hair back.

As you'd expect in a movie of this sort, at some point Brandon's rising star will fall. The question is, will anyone care? And by that I mean, anyone in the audience. I was hard pressed to care about anyone in this movie as it's filled with dull and unlikable characters from start to finish.

Perhaps the only enjoyment to be had from the whole movie is watching Pacino chew up the scenery once again. His character is the most unlikable of all, but at least he's entertaining to watch. Nobody plays this type of role (the older, morally corrupted mentor to a naïve youth) better than him. However, not even his sterling work can do anything to help this movie.

Rounding out the main cast, are Rene Russo as Abrams' wife and Jeremy Piven as the former star of Abrams' organization who is displaced by Brandon's arrival. They both do ok jobs, but have little effect on the film.

If I were to bet on the success of this movie, I'd be wagering large against it.