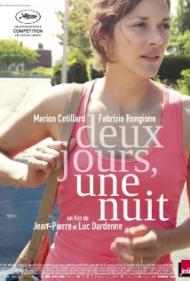 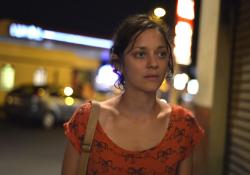 This was Belgium's submission for the Academy Award for Best Foreign Language Film at the 87th Academy Awards, but it failed to receive a nomination in that category. However, its star Marion Cotillard managed one of the few surprises among the nominations when she snagged one for Best Actress. It was well earned as she is the heart and soul of this small, personal film.

The plot is quite simple. As the title suggests, the entire story takes place over one weekend. Cotillard plays Sandra, a wife and mother recovering from a serious bout of depression and about to return to work following a period of medical leave. However, on the Friday before she is due to return, her boss holds a vote amongst the other workers. They can either earn bonuses or allow Sandra to return to work, but not both. They vote for the bonuses. All of this has taken place before the film starts. The film starts with Sandra and a friend from work convincing their boss to allow a second, secret ballot, vote to take place on Monday, since they feel that the voting was unfairly influenced by one of the foremen who doesn't like Sandra. Reluctantly, the boss agrees. That gives Sandra the weekend to visit each of her 16 co-workers and try to convince them to vote for her to be allowed to keep her job. That she must do this while battling her depression and dependency on Xanax, only adds to her problems.

The Dardenne brothers, who directed the film, shot many of the scenes in takes up to eight minutes long. Their camera follows Sandra almost like someone looking over her shoulders at times. They filmed it in sequence and keep things looking very real. This is not a glamorous part. They make this simple story into something quite interesting and make you deeply invested in its outcome. And they tell the story without an ounce of melodrama.

Of course the directors are helped by the raw performance of their leading lady. Cotillard more than earned her Oscar nomination. She is in every scene and she delivers a range of emotion that runs the gamut. We feel the highs with her when she manages to convince a fellow employee to vote for her and we most definitely feel the lows with her when things don't go her way. She maintains a front no matter which way her co-workers tell her they intend to vote, but when walking away you can see the facade crumbling across her face. Even her tiny triumphs are magnified because of her precarious emotional state. It's a very real and genuine performance. We feel for her as she must go and humble herself before her co-workers.

The plot is slight, the script quite minimal, and the setup feels a little contrived. However, all of these flaws feel minor in the face of Cotillard's dramatic performance. She's the best reason to see it as she proves that once again she's one of the finest actresses working today. 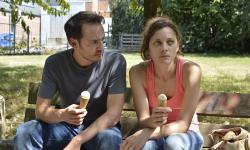 Fabrizio Rongione and Marion Cotillard in Two Days, One Night.

Two Days, One Night takes the viewer on an emotional roller coaster. Watching Sandra make the rounds asking each of her coworkers to vote for her to keep her job is gut-wrenching cinema and so very true to life. The Dardenne brothers are clearly masters of their craft. Note the bare bones yet affecting script, the long takes where the camera faithfully accompanies Sandra on her quest, and the raw central performance from Marion Cotillard. She's entirely convincing as this woman who's so perilously close to spiraling down life's drain.

Other than the fact that Sandra has recently recovered from a nervous breakdown, we get very little back story. She and her husband have two young children and they seem to have a reasonably stable relationship. Her husband pushes her to go and talk to her coworkers. He seems the more desperate of the two of them for her to get the job back. The stress of the situation and the pure misery this poor woman feels are etched on every expression on Marion Cotillard's face. Yet, as Scott wrote, there isn't any added melodrama. It's a low key but authentically moving story.

The Dardenne brothers admitted to being inspired by Sidney Lumet's 12 Angry Men in the sense that in both films a character must argue to change the minds of others on a crucial vote. It can also be seen as a sort of existential High Noon with its looming showdown motif, but that's neither here nor there. What keeps the story grounded in reality are the reactions from Sandra's coworkers; some avoid her, others get angry or confrontational, a few express remorse, one guy fears the consequences of voting for her. All of them could use the bonus money. This is an incredibly shitty situation for any boss to put his employees in. The villain of the movie is named Corporate Greed.

I won't give away the results of the secret ballot but I will say that the denouement was more upbeat than I expected. Sandra ends the movie feeling better than she did at any other time during it, so at least the relentless emotional beating the audience takes on her behalf pays off. In some ways Two Days, One Night is too realistic, at least in the sense that it's not the kind of movie you'll ever want to experience again. One time is enough to be put through this emotional wringer. 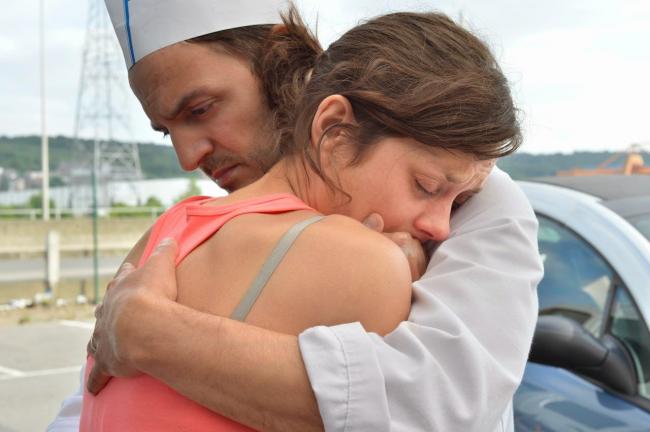 Fabrizio Rongione and Marion Cotillard in Two Days, One Night

Two Days, One Night tells the story of a family in crisis. When one is married and has kids, your life becomes fragile. Your children and spouse depend on you for many things, with one of the most important being a livelihood to support the family unit. Sandra works at a factory while her husband, Manu, works at a restaurant. They are comfortably middle class, which is to say that they appear to have what they need but also seem to live pay check to pay check. The loss of one of their incomes would mean a drastic reduction in their life style.

With that in mind, Sandra must ask her co-workers to not take a bonus that would benefit their families. Considering these people are in similar, or worse, financial situations, it is a lot to ask. Sandra understands this all too well. At one point she tells Manu, “Every time I feel like a beggar, a thief coming to take their money. They look at me, ready to hit me. I feel like I'm hitting them too.”

As my brothers wrote, Marion Cotillard does a great job portraying a very realistic character. Gone is the glamorous star we usually see in her. I was reminded of what Jennifer Aniston was going for in The Good Girl (2002) but failed to fully achieve.

Although this is clearly Cotillard’s movie, I appreciated Fabrizio Rongione as Manu. He is a supportive husband even though they have not had sex in four months. Sandras’s victory or loss is Manu’s. Like Cotillard, Rongione plays every scene very naturally. One of his best moments is when he takes four pizzas from the oven, serves it to their children in the next room, as he talks to them, cutting up one pizza for his son and then walking into the next to see Sandra, all in one take.

The way this film was directed, I felt as if I were eaves dropping on a real couple’s private life. We see them in stressed situations as well as in loving moments. I found the brief scene of them in the car with the song playing on the radio to be quite touching. In fact, it is their relationship that gives this story its heart, not whether or not she gets to keep her job. The ending, that Patrick hinted at, is a feel good one but not for the reasons you may think.

Two Days, One Night is a nicely put together low key film that I related to as well as enjoyed.