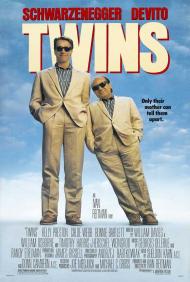 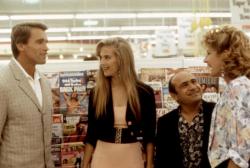 Although known for his action films, Arnold Schwarzenegger's first famous role was as the Handsome Stranger in a comedy, The Villain (1979).  His size and accent can be played up well for comic effect.  Pairing him with his physical polar opposite, Danny DeVito, is a joke in and of itself.

Julius and Vincent are twins from a secret government experiment to create a genetically perfect human being.  The DNA of different exceptional men were combined and then inseminated into a beautiful woman. She ended up giving birth to twins.  Julius got all the good DNA while Vincent got the left overs.  Julius was raised on a tropical island, studying and learning, while Vincent grew up in an orphanage.  Julius is pure and innocent while Vincent is a criminal.

At 35 years of age Julius learns that he has a brother and decides to leave his island home to find him in Los Angeles.  Waving goodbye to his partial father, Julius says of his twin, "He is probably just like me."  He meets Vincent in prison, who by no means believes they are twins.  At first Vincent takes advantage of Julius's ignorance, but they eventually bond and go in search of their birth mother in a stolen car containing a valuable item.  People who Vincent owes money to, as well as an assassin, come searching for them, providing several opportunities for fight scenes.

Twins is not a laugh out loud comedy.  Instead of great lines or physical pratfalls, it relies mostly on the charm of its two leads.  Just watching them together is worth a smile.  DeVito is his usual disgusting self while Schwarzenegger gets to say his trademark line,  "If you're lying to me, I'll be back."

There are a few laughs to be found though, My favorite moment of Arnold's is the look on his face after he has sex for the first time with the hot Kelly Preston.  I laughed when DeVito tells  Schwarzenegger about returning the four million dollars.

The message of Twins is the importance of brothers and family.   It is a very pro-family film about sticking by each other through thick and thin.  Twins is a nice little harmless comedy.  It may not make you belly laugh often, but you will not regret watching it either.  It also demonstrated that Arnold Schwarzenegger could do more than just kick ass.