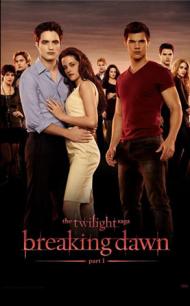 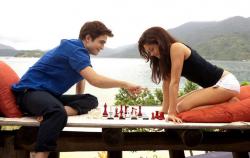 It doesn't take long for the makers of this movie to give its audience what it wants. Four seconds into it, the buff Taylor Lautner already has his shirt off. And that's what this movie is all about. Not showing off Lautner's abs, but giving its fans what they want, which is a sappy, tween girl's fantasy of eternal love.

There's not an over abundance of plot this time around. The movie begins with the wedding of Bella and Edward, then follows them on their honeymoon to a private island off the coast of Brazil. On their honeymoon, Bella gets pregnant with a vampire/human hybrid who grows super-fast, so that in a matter of weeks, she's already months along. The pregnancy is made even more difficult because the baby is super strong and demanding blood. One of the babies' kicks, cracks Bella's ribs. Although you already know the answer, I won't tell you whether or not Bella survives the delivery.

The only conflict in the story feels completely tacked on to the plot. For reasons never fully explained, the werewolves in the area object to the baby. Now, I know that I tend to forget the plots to these movies as quickly as I can, but I thought that the werewolves and the vampires in the Forks area had settled all of their differences in an earlier movie and even at the beginning of this one they seem pretty relaxed towards each other. And the final resolution to the conflict in this movie feels like a cop out. This part of the story really feels as though it were added so that the movie would have some action in it.

The cast delivers the same performance as always. Pattinson and Stewart are both serious and dull, only now a few years older. Stewart's biggest acting stretch is pretending to be 18 and a virgin, neither one of which she does all that successfully. Lautner, the only charismatic member of the trio, has a smaller role this time around. Rising star Anna Kendrick, who I'm assuming is under contract to keep appearing in these films, has a funny scene at the wedding, showing more personality in her 30 seconds than Stewart does in the entire film.

You can certainly read things into these movies. Just what is author Stephenie Meyer trying to say? She has two men lusting after a young virginal girl. The men are both monsters. One wants to suck her blood. He can't even have sex with her because if he does, he won't be able to control his urges and could kill her. The other man is literally a wild dog. When she does finally marry one of them and they have sex, she is bruised and battered in the process and ends up pregnant with a baby that wants to kill her. She certainly presents a convincing case for abstinence.

Of course it doesn't matter what I or any critic has to say about these movies because they aren't made for us. They're made for the millions of fans of the books and movies who read and watch them with an uncritical mind. They're just giving the people what they want and based on their success, it's clear they're doing something right. 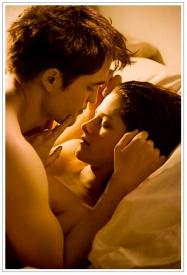 It may look tender but there will be bruising come morning.

The Twilight Saga: Breaking Dawn - Part 1 is a three hour movie in which next to nothing happens.  Bella and Edward get married.  Bella gets pregnant and has a baby.  This story could have been told in twenty minutes and still had time left for a fight scene.  I have not seen a cast sit down and talk this much since 12 Angry Men, but that was at least an entertaining movie.

During the lengthy wedding scene, my bored 17 year old went to the bathroom.  After he returned, I informed him that he missed absolutely nothing.  In fact, he could could have been gone for 45 minutes and I would have told him the same thing and meant it.  I have seen handicapped senior citizens move faster than this plot.  Later I found my son with his hood pulled over his eyes and his head down as if sleeping.  Again, he was not missing anything.

If Breaking Dawn - Part 1 accomplishes anything, besides proving that it's fans have no discerning taste, is that it nearly got me to sympathize with Bella.  Here is a young pregnant woman to which everyone around her keeps telling her to abort her fetus.  This includes her prince charming husband.  She has to take everything in very quickly while dealing with her own possible death at the hands of her unborn child.  Kristen Stewart however, is not talented enough to get me to give a shit.  Her depressed expression so rarely changes. Calling her an actress is an insult to real actresses.

The worst possible moment in this entire film is when Jacob falls in love with a baby.  Somehow he knows she will grow up to be hot and that he will love her.  Of course it makes absolutely no sense, but neither does the sex scene in which Edward bruises Bella on her shoulder and arm.  They never show how that happened.  Seriously, what are they implying, that he humped her arm?  Has the book's author ever actually had sex?

The Twilight Saga: Breaking Dawn - Part 1 is the worst film in the series and that is saying something when considering just how bad this entire series is. 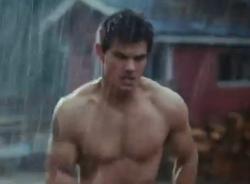 Taylor Lautner gives his fans what they want in Breaking Dawn - Part 1.

Eric, I agree that The Twilight Saga: Breaking Dawn – Part 1 (even its title is cumbersome and needlessly long) seems like it lasts 3 hours. The entire movie feels like it plays out in slow motion and the vacuous plot can be summed up as Bella marries Edward has sex and gives birth. It is absolutely a low point in one of the worst movie franchises in Hollywood history. A dubious honor sure to remain intact at least until the final installment comes out.

Has any movie series ever featured such untalented actors? None of the three main stars can act their way out of a paper bag. Lautner, at least, has charisma to spare, not to mention a chest and abs to die for. Stewart and Pattinson are two of the blandest ciphers in screen history. The absurd plot is sure to appeal to tween-masochists everywhere. Its message seems to be that all young women want to be brutalized during sex and endure any physical agony for the love of their man.

I laughed when Bella worried that the name Renesme might be too odd a moniker for her daughter. She’s about to give birth to her vampire husband’s bizarre, fast-growing, incredibly-strong, blood-chugging progeny and she’s worried about her name being weird! Just when you think the plot can’t get any more ridiculous Jacob imprints with Bella and Edward’s newborn daughter. She’s barely had her placenta washed off and already she’s betrothed to her mother’s rejected suitor. Eeww!

Eric, I’m with you 100% on this one. Breaking Dawn – Part 1 is the worst movie in the god-awful Twilight franchise and probably the crappiest movie in history to rake in more than 100 million dollars at the box office. 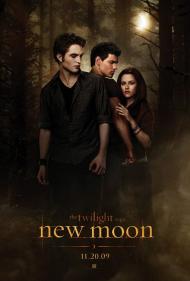 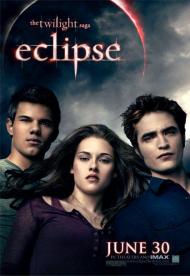 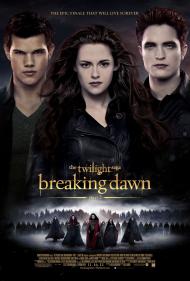