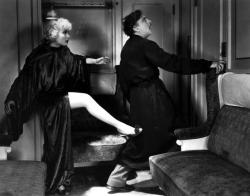 With Howard Hawks directing a script by Ben Hecht and Charles MacArthur, starring John Barrymore and Carole Lombard, it’s no surprise that Twentieth Century is a sparkling gem of a screwball comedy. The story flies along at breakneck speed, the dialogue is filled with clever witticisms and Barrymore and Lombard try their damnedest to upstage each other every step of the way.

Barrymore plays Oscar Jaffe, the most flamboyant, egotistical Broadway impresario ever to walk the boards. Lombard is Mildred Plotka, a former lingerie model whom Jaffe has discovered, rechristened Lily Garland, and intends to turn into a star of the Great White Way. He succeeds alright but his overbearing jealousy pushes his newly minted star Westward. She goes to Hollywood and becomes a sensation in the movies.

Several years later, a down on his luck Jaffe has to sneak out of Chicago to avoid his debtors after his most recent play (a production of Joan of Arc) has flopped miserably. Along with his two loyal employees he boards the Twentieth Century Limited bound for New York City. As fate would have it, Lily Garland just happens to be aboard that very same train. In no time Jaffe has concocted a plot to win Lily back and hopefully turn his fortunes around in the process.

The supporting cast includes such screwball comedy regulars as Walter Connolly and Roscoe Karns (they play Jaffe’s loyal but verbally abused partners), both of whom appeared in Frank Capra’s smash hit It Happened One Night that same year. Charles Lane plays Jaffe’s producer competition and ex-assistant Max Jacobs (formerly Mandelbaum). Etienne Girardot recreated his scene stealing role of the hilariously insane Mathew J. Clark from the stage play. He has a sticker fetish and a penchant for writing phony checks.

But make no mistake; Twentieth Century belongs to its two stars.

Oscar Jaffe was the role John Barrymore was born to play. He’s a much bigger ham than any of his actors, given to grand theatrical gestures and impossibly melodramatic speeches. For example when Lily walks out on his play he throws a fit. Screaming, “Anathema! Child of Satan!” before destroying posters of his wayward star. Later he says to Lily about her movie career, “When I left that movie house, I felt some magnificent ruby had been thrown into a platter of lard.”

Lombard gets to show a bit more range, while demonstrating just why she was the most beautiful madcap heroine ever to appear in screwball comedies. At the beginning of the movie she is the bland untalented Mildred Plotka. Under Jaffe’s constant mentoring she quickly blossoms into the star Lily Garland, with an ego to match. With little provocation she now bursts into tantrums, stamping her feet while screaming things like, “Who cares about your respect? I'm too big to be respected!”

By the end of the picture we realize what the two of them have known all along, namely that they are two peas in a pod. Or as Lily puts it, “That's the trouble with you, Oscar. With both of us. We're not people, we're lithographs. We don't know anything about love unless it's written and rehearsed. We're only real in between curtains.” 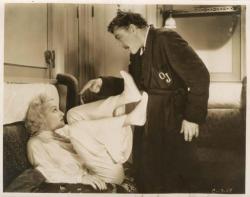 Carole Lombard and John Barrymore make cinematic magic together on board the Twentieth Century.

Movies like this are the reason I love the movies. This is classic screwball comedy from Hollywood's Golden Age and it is a delight from start to finish. Two stars' careers, Lombard's in ascendance and Barrymore's in decline, intersected with perfect timing to create movie magic.

Nobody, but nobody could have played this part like Barrymore does. His Oscar Jaffe is all about drama and performance. Every speech he makes is over the top and dramatic, but in the best possible way and with the greatest comic effect and gravitas. His hair, which is almost a character onto itself, is flipped and tossed for dramatic/comic effect. It's a brilliant performance.

Lombard as Lily is the perfect match for him. She switches on and off her hysteria like a light switch. They're two hams who can't bear to share the spotlight with each other, but there's no one else who will ever understand them like each other. It's a comedy match made in cinematic heaven.

The lines they throw around and at each other are solid gold. Oscar, who never stops performing, says with the deepest of loathing in his voice, "I never thought I should sink so low as to become an actor." And later about Lily, "She loves me. I could tell that through her screaming." Together they share this exchange, "I'm offering you a last chance to become immortal," Oscar tells her. To which Lily replies, "I've decided to stay mortal with responsible management." The definition of comic chemistry should have a picture of the two of them underneath it.

Along with the two leads comes some terrific supporting work. Oscar's two long suffering assistants provide almost as many laughs as the leads. He fires both of them several times in dramatic fashion with lines such as, "Get out of my theatre, you gray rat! And don't have that fat wife of yours come around again, pleading for you! ", but they always come back. They're both instantly recognizable as Shapely and Mr. Andrews from It Happened One Night.

Released just a month and 2 days before the Hays Code began to be enforced, the script manages to squeeze some risque material in under the wire. Lily and Oscar are clearly having sex and appear to be living together for a while but they're not married. When Lily is describing how she took a phone call and Oscar was listening to her, Owen, who is lying on Lily's boat shaped bed asks, "Was he rowing?" Lombard, who is quite attractive here, also nearly spills out of her dress on opening night and is clearly not wearing a bra in a later scene on the train.

If I have any complaint it's that I wish there were more scenes with Lombard and Barrymore together. They are separated for a large portion of the story. It's still fantastically entertaining when they're apart, but it's even better when they're together.

I love coming across movies like this. I'd never heard of it before now, but am unlikely to ever forget it. 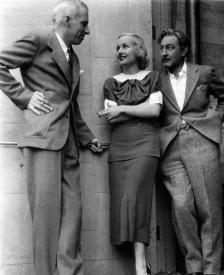 Never has over acting been so funny.  John Barrymore plays every scene as big and loud as he can.  His Oscar Jaffe is always on.  You never know what he might say or do next.  He is such a drama queen that it is hard to gauge when he is sincere or just playing to the back row.  "When I love a woman, I'm an Oriental. It never goes! It never dies!"

Carole Lombard was as beautiful as she was talented.  I too thought she might fall out of that dress when she bends over.  She poured on the hysterics as fast as anyone.  "Oscar, you're complete. The most horrible excuse for a human being that ever walked on two legs."

As Patrick wrote, they are meant for each other.  Look at the scene where they are both sitting on the train acting up.  Each feigning despair, with wailing and hand gestures.  Neither concerned with the other, as they are both too busy playing the scene.  You could not find this much ham at a pig farm.

My brothers also mentioned the supporting actors,Walter Connolly and Roscoe Karns.  They both shine as inebriated idiots.  Barrymore says of them, "It's typical of my career that in the great crises of life, I should stand flanked by two incompetent alcoholics."  My favorite scene of theirs is when they bring Lombard into Barrymore's compartment to get her to sign the contract.  Barrymore and Lombard have most of the lines and are playing it big but Connolly and Karns steal the scene with hand gestures and facial expressions.

Like Scott, I had never heard of this film before and am grateful to have discovered it.  Hawks keeps the pace revved up, making it a sheer pleasure to watch Barrymore and Lombard as a couple of whirlwinds blowing through every scene.  When these two forces of nature collided they created classic cinema clashes, the likes of which has never been seen since. 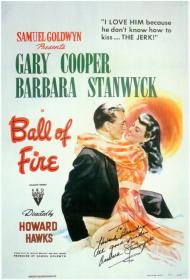