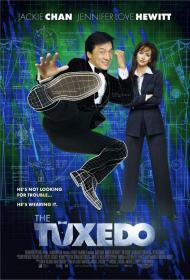 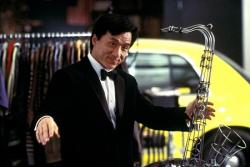 Jackie Chan in The Tuxedo.

Question: What does a forty-something Chinese action star have in common with a twenty-something American hottie? Answer: Other than that they both appear in the pathetic movie The Tuxedo absolutely nothing.

This dismal action/comedy has Jackie Chan playing a cab driver who becomes a chauffeur for a secret agent. The agent has a special tuxedo that allows the wearer all kinds of abilities. Before you know it, the agent is out of action and our unlikely driver puts on the suit.

Chan's clueless chauffeur is joined by a clueless secret agent played by Jennifer Love Hewitt. Together they stumble through this preposterous plot. They occasionally get into fights and attempt comedy. Chan does a James Brown imitation on stage, but it is not really that funny. Early in the movie, Chan does a slap stick scene involving his cab and a bike messenger. It was the one and only time I actually laughed.

Jennifer Love Hewitt's performance in this movie may very well be the worst acting I have ever seen in an action movie. She was completely unconvincing in this role. Granted this is a lousy movie all together, but at least Chan plays it straight the whole time. Hewitt should be embarrassed she even made this movie.

For more entertainment watch the outtakes on the DVD. You will see outtake after outtake of Hewitt messing up her lines or not being able to keep a straight face. Often these outtakes show a frustrated Chan forcing a smile as Hewitt looks completely unprepared and unprofessional as she again screws up a scene.

I watched this movie with my 7 year old. I was bored. He was bored. Unless you are some diehard fan of Chan's, I would strongly suggest avoiding this waste of celluloid.