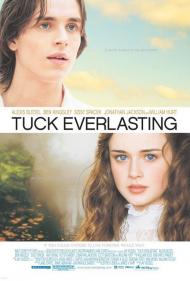 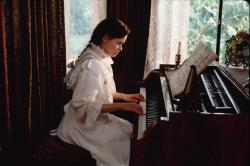 Tuck Everlasting is a surprisingly sweet, emotional tale. Based on the book by Natalie Babbit, it is a love story with some philosophical questions. A short film with a large load of emotion.

Around the turn of the century a bored 15 year old girl, Winifred, runs away to escape her wealthy families rigid life. While lost in the woods she comes upon a teenage boy, Jess, drinking from a small spring. Jess, surprised by the girl, takes her back to his family's home deep in the woods. The family doesn't exactly kidnap her, but they do not let her go home either. The Tuck family has a secret and they are afraid Winifred will let the secret be known if she goes back to her family.

Jess and Winifred spend the summer frolicking in the woods. While their love blossoms, her father has search parties out looking for her. Also, a mysterious stranger is asking around about a family by the name of Tuck. Eventually Winifred learns the secret the Tucks are hiding. Through an emotional scene, Jess's brother Miles tells the family's story. Scott Bairstow, in the supporting role of Miles, out acts both leads; Alexis Bledel as Winifred and Jonathan Jackson as Jess.

Jess, who looks like a 17 year old is actually 104. The family was journeying west nearly 100 years ago when they stopped at a spring to drink. The water, for whatever reason, makes them immortal. They at first did not realize this. Miles got married and had 2 children. When they discovered their immortality Miles begged his wife to drink from the spring so as to live forever with him. She assumed him to be nuts and left with the children. The Tuck family realizing the reaction people would have to them went into hiding.

Jess and Winifred find themselves faced with a dilemma. If she drinks the spring she will live forever with Jess. However, Jess's father, William Hurt, informs Winifred that immortality is not all it is cracked up to be. 'We don't exist.' He tells her. 'We are just stones in a river.'

A short film with a bit a filler. None the less, I found myself wrapped up in the emotional tale of a family granted an unwanted gift. Hurt, Spacek and Bairstow all do a fine job. It is just too bad the leads, especially Jackson, didn't have more charisma.