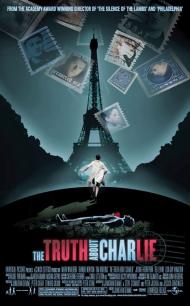 A hat alone, does not a character make.

The foremost question to consider is whether Jonathan Demme is brave or stupid? Remaking a Cary Grant movie is not impossible, per-se. Many of his film’s are ripe for a reworking. I am waiting for someone to redo I Was A Male War Bride set during the Iraq war. The problem anyone will have doing it though, is who to cast in a role made famous by the greatest leading man of the 20th century?

Demme must have an affection for older movies as he has directed the remake of The Manchurian Candidate as well as this remake of Charade. His way of getting around the leading man comparison issue has been to cast a black actor in the lead. Denzel Washington played the Frank Sinatra part in Candidate and Will Smith was supposed to play the Grant role in The Truth About Charlie. The production on Ali ran long so one time wanna be black rapper, Mark Wahlberg was cast.

In this newer version, Newton plays a newlywed, who becomes newly widowed. She falls for a man who just happens to show up everywhere she goes. In two different countries at that. She never seems to think it suspicious. Other questionable characters show up and she soon learns that everyone is after some money she never knew her husband had.

Although Charade was not a perfect film by any means, The Truth About Charlie cannot rise above it. Newton does what she can with the weak role she is playing. Her natural British accent, so often absent in American films, serves her character living in Paris well. Speaking of Paris, Demme drops the ball on not taking advantage of the setting. This movie takes place in the city of lights and far to often these characters are in seedy, back alleys. I wonder how much of this movie was actually filmed there?

The weakest link in the whole production though is Wahlberg, but it is not completely his fault. At 31, he still looked like he belonged in a boy band. Sure, he can be considered handsome and is in good shape. He changes his shirt for no apparent reason, at one point, other than to prove that point. He is not however, convincing as an international man of mystery. To try to give his character some sense of style and mystique, Wahlberg often wears a hat in this film. I am not sure whose idea it was to put a fedora on his head when wearing a turtle neck, or a beret with a trench coat, but I would think that blending in to your surroundings would be more advantageous for an undercover government agent than standing out.

The Truth About Charlie has some very bland dialogue. “You’re a good listener.” “You’re a good talker.” Charade had lots of memorable dialogue. This movie recycles one of it’s better lines where Newton says to Wahlberg, “Do you know what's wrong with you?" Wahlberg says, “What?” and Newton responds, “Nothing.” What she should have answered is, “Your choice in hats.”