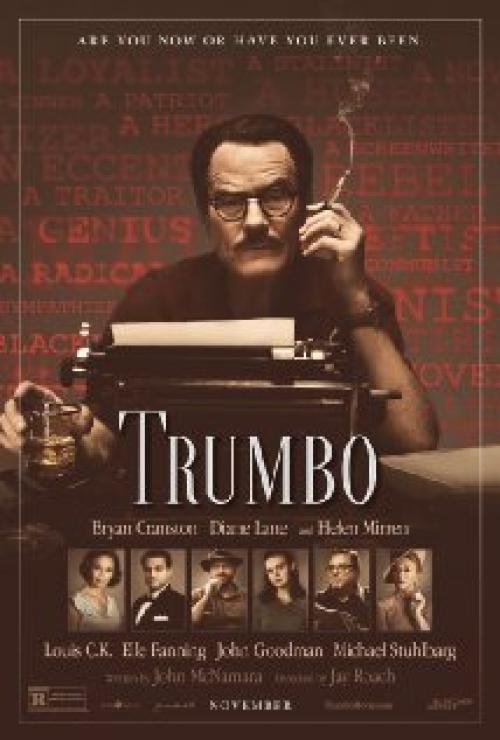 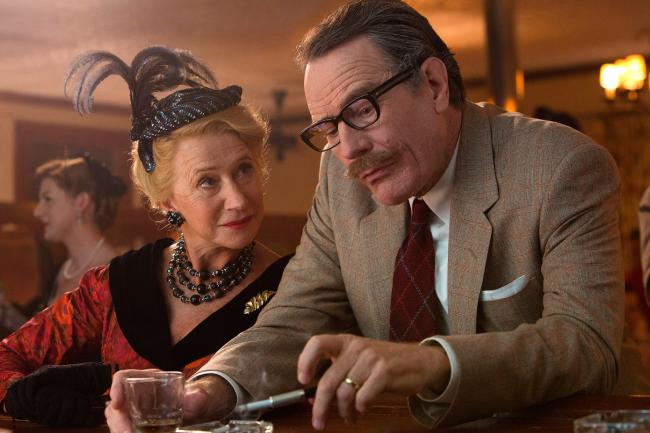 Helen Mirren as Hedda Hopper and Bryan Cranston as Dalton Trumbo in Trumbo.

Trumbo tells the story of screenwriter Dalton Trumbo, part of the infamous Hollywood Ten who were blacklisted in 1947 after refusing to cooperate with or answer questions from the House on un-American Activities, following accusations that they were members or former members of the Communist Party. He's an interesting character played quite well by Bryan Cranston, but the movie itself is rather dull. As is said frequently in this movie about scripts Trumbo is asked to work on, the script is bad, but there's a good story in here somewhere.

Part of the problem with the movie is that it lacks focus. The character of Trumbo is at its heart, but it never seems to make up its mind whether or not it wants to be a family drama, a biopic, or a political/historical drama. It throws in elements of each, when it would have done better to focus on a single one of them.

The most entertaining storylines are the ones that focus on Trumbo's work and his dealings with real life Hollywood figures. Edward G. Robinson, John Wayne, Hedda Hopper, Kirk Douglas, and Otto Preminger all make an appearance. When the film begins, Robinson and Trumbo are working together on a film and both seem politically aligned. Following the blacklist however, Robinson cooperates with the HUAC and even names names. John Wayne and Hedda Hopper are both staunchly anti-communist and support the blacklist, with Hopper being portrayed as particularly fervent by Helen Mirren. Douglas and Preminger are the two figures who helped Trumbo come back into the Hollywood fold and end the blacklist by not only hiring him, but giving him screen credit on Spartacus and Exodus.

During the years while Trumbo was blacklisted, he worked a writer's black market. He and his fellow blacklisted writers churned out screenplays for B-movies under pseudonyms, many of them for King Brothers Productions, with Frank King played colorfully by John Goodman. Trumbo also worked clandestinely on more prestigious pictures and won the Academy Award for Best Screenplay twice while on the Blacklist, one for 1953's Roman Holiday and another for 1956's The Brave One, without getting credit for either of them until years later.

The family drama works less well. Diane Lane plays Trumbo's long suffering wife, but she's written very generically. Elle Fanning plays his oldest daughter, but her story of being a neglected child kind of fizzles out and merely adds to the running time. The rest of his children are merely background extras.

Trumbo went to prison for his political beliefs, but this movie lacks the strength of his convictions. It treats the politics simplistically. Hopper is a cartoon villain. Trumbo and a more radical writer, played by Louis C.K., argue occasionally but to no real end, and the movie shies away from making any real political statement beyond the most generic platitudes.

Cranston has already received several nominations for his performance as Trumbo and they are well deserved. He's one of the finest character actors working today. The rest of the cast is also quite good. Those playing real life celebrities avoid direct impersonations, but manage to evoke the feel of those they are portraying. The filmmakers also employ newsreel footage, some of them with Bryan Cranston Forrest Gumped into them, including footage of Ronald Reagan and John F. Kennedy.

Anyone with an interest in Hollywood and its history should find something to enjoy here, but overall as movie entertainment, it never quite succeeds. 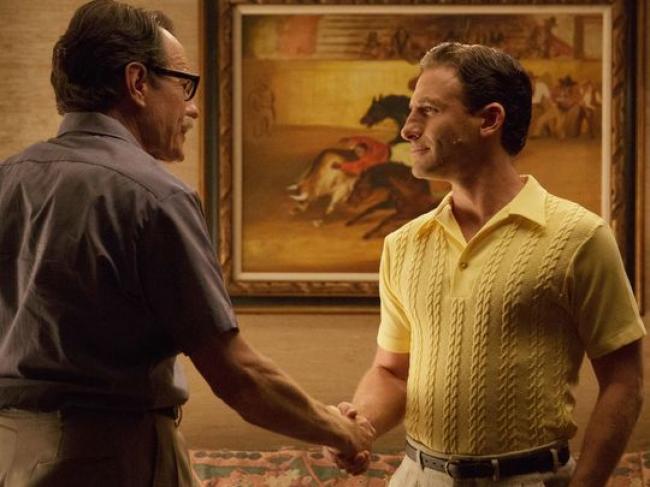 I have no idea what Scott is complaining about when he claims the film has a lack of focus. Dalton Trumbo was a married father who was very outspoken about his communist/liberal politics so of course these things are going to be included in his biopic. The point of showing his family is to demonstrate the price they had to pay for him standing by his beliefs. Their presence is meant to encourage our sympathy for him.

Speaking of his family, Trumbo determines with pride that his daughter is a communist because she would share her lunch with a hungry classmate. He believes her generosity makes her a good little communist. I think the fact that she gives away food bought and made by someone else makes her one.

The historical aspect of the film is fascinating for movie buffs. David James Elliot, looking like he put on some extra weight for the role, mimics John Wayne's speech patterns very effectively. Dean O'Gorman, as Kirk Douglas, gets to re-enact a scene from Spartacus (1960). The real highlight is Helen Mirren as Hedda Hopper. She may have been just a gossip columnist but she wielded some considerable power in Hollywood. Her best scene is when she talks to the studio head in his office about how he used to try to fuck her in it when she was a young starlet but now if he does not do what she wants, she will fuck him in her column.

Dalton Trumbo is portrayed here as a hero willing to sacrifice imprisonment by not naming his communist friends. He is later sentenced to a year behind bars. After his release, he cannot find work and he loses the family home. When trying to make ends meet by writing countless screenplays, his daughter yells at him for the lack of parental attention. I see her point as he chose his communist companions over his own children.

The blacklisting was an attack not only on Hollywood but all of America's freedom of speech. Looking at these events with hindsight, it all seems ridiculously overblown. If the film fails anywhere, it is that it does not give enough information as to why some people would take a stand that is so obviously, by today's logic, stupid. We already understood the greatness of freedom of speech. Real insight would have been explaining why some were so scared of the "red boogie man" and were actively trying to weed them out.

Trumbo is an interesting watch but not an altogether great one. 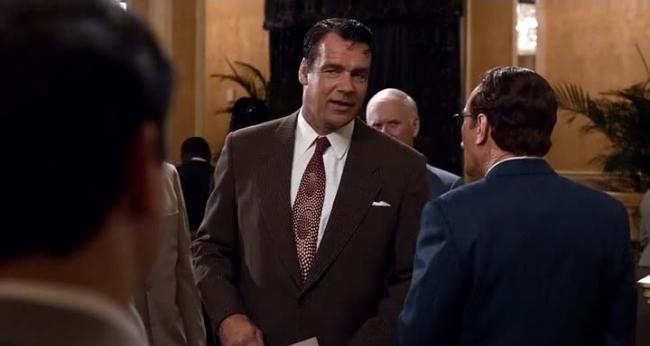 As a huge fan of the time period and setting, I was hoping to love Trumbo. As it turns out I only halfway enjoyed it. The best thing the movie has going for it is the performance by Bryan Cranston as Dalton Trumbo. I have no idea what the real Trumbo was like but Cranston certainly looks the part. Over the course of the movie he ages from early to late middle age, his mustache and hair graying as the years pass, with an ever present cigarette holder in his hand or clenched between his teeth. (I wonder if Hunter S. Thompson was influenced by Trumbo's personal style?) Cranston -and the script- portray him as colorful, conflicted, ambitious and brilliant.

I'm with Scott on this one. The scenes at his home may have been intended to induce sympathy by demonstrating the toll his refusing to name names takes on his family. Fair enough. The problem is that these scenes are dull and poorly written. Why Diane Lane took this part is beyond me. As Cleo, Dalton's wife, she does nothing but stand in the background looking on at her husband's life, with alternating expressions of worry and compassion on her face. The communism lesson Eric referenced is just the script's way of explaining it to the audience. The fact that they have him teaching it to his grammar school aged daughter shows what the filmmakers think about the average moviegoers' intelligence.

Besides Cranston several other performances are worth mentioning. Louis C.K. proves himself adept at drama as radical writer Arlen Hird. In one of the film's better written scenes, Hird calls Trumbo out about the hypocrisy of his professed political beliefs when compared to the extravagant lifestyle he leads. The script needed more scenes like this one. John Goodman brings his usual bite to the role of Frank King. His scenes are anything but dull. I was a bit underwhelmed by Helen Mirren as Hedda Hopper however. She sounds nothing like the real woman and the script makes it seem as if Hopper was really running Hollywood and personally responsible for the Hollywood Ten blacklist (with an assist from Duke Wayne). Hopper may have been a vile bitch but according to this movie she's Satan's assistant.

Eric mentioned the First Amendment and that is what the blacklist boils down to. None of the ten were guilty of any crime. It was an unfortunate aftereffect of WWII. The Allies had won; Russia and America stood facing each other in a world that now included nuclear weapons. People were frightened. HUAC is now, and was then, an obvious paranoiac overreaction to the emergence of the Soviet Union as the world's only other superpower. If nothing else, Trumbo shines a spotlight on this shameful period in American history.