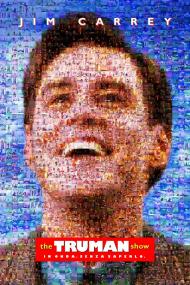 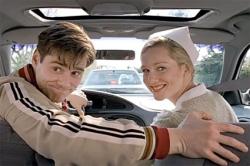 Jim Carrey and Laura Linney in The Truman Show

The Truman Show is quite simply the greatest analogy for life ever put on film. It is that rare Hollywood movie that entertains as well as makes you think and feel. At the time of its initial release, reality television was in its infancy with such shows as MTV's "The Real World" and the "Survivor" phenomenon was a couple of years away. More than a dozen years later we view reality TV as quasi-reality. Do you really think everything that happens on camera to the Kardashians is spontaneous?

The Truman Show is a reality show of someone's entire life set in a very controlled environment. Truman grew up and lives in a town full of actors who are all in on the act. His best friend, Mom and wife are all just paid actors. Truman knows nothing of this, accepting it all as his normal existence. As Christof, the shows director explains, "We accept the reality of the world with which we are presented."

Christof is the God figure controlling the world of the show. "I am the Creator - of a television show that gives hope and joy and inspiration to millions." He hires and fires, changing cast members as he sees fit, to bring people in and out of Truman's life. To create a fear of water, to keep Truman on the island set, he had the actor playing Truman's father pretend to drown. Years later, with Truman now an adult, the actor who played his father sneaks back onto the set and Truman sees him, putting Truman on a quest for the truth.

Suddenly he starts to see his world with suspicion, as if it is not what he had always thought it was. His wife had a habit of talking about new items she has recently bought. He took it as the norm, while she was actually doing a product placement commercial. Suddenly, he realizes how out of place that is, asking her, "Who are you talking to?" as she holds up a can of cocoa, talking about how good it is. He notices how people on the street are moving but not really going any where. Truman becomes extremely frustrated as his world seems to be coming apart in front of his eyes and he is not sure why.

Have we not all in real life experienced such eye opening moments? How many of us suddenly discovered religion to be a truth or a false. How many of us have read a book or been mentored by someone who opened our eyes to a bigger world. How many of us followed a leader or political party only to discover we prefer another. How many of us have come to the realization that we did not have life as figured out as we thought. If you have not had a similar experience then you are likely still being taken care of by someone else.

Truman is a true man who wants nothing more than to know what is real, what is the truth. He wants nothing more than what every man wants, freedom. No matter how elaborate a man's cage, he will still want the power to make his own choices. No one can make choices for you as no one knows what truly lies inside your mind. Christof says to Truman, "I know you better than you know yourself." Who responds, "You never had a camera in my head!" 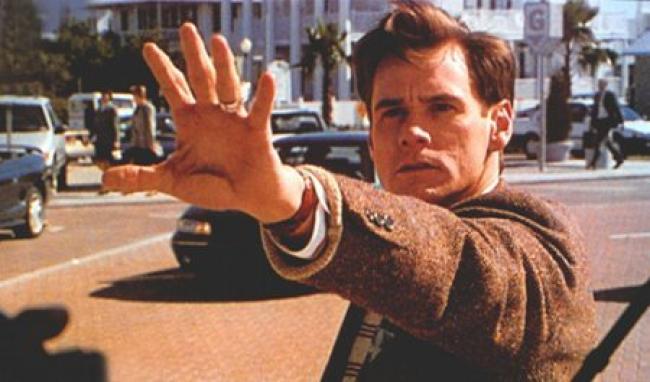 Jim Carrey in The Truman Show.

The first time I watched The Truman Show I was distracted by what I perceived to be the movie's two main implausibilities. The first one being that I thought Truman was far too old to be just now questioning the authenticity of his world. He's a 30 year old man and yet he never before noticed the same pedestrians and cars going by at the same time every day? The other point I couldn't buy was the legality of the situation. According to the script, Truman was the first human to be legally adopted by a corporation, but since when does adoption mean you own someone outright? And as popular as The Truman Show supposedly was from the start, you can't tell me that a “Free Truman” movement wouldn't have sprung up to get this child released from this social-experiment, televised reality, cage.

Of course neither of those details has anything to do with the point of the movie and, as Eric pointed out, The Truman show really makes you think. It can be looked at in many different ways. You can see religious symbolism with Christof (of Christ?) as the all powerful deity controlling every aspect of Truman's life. Eric, not only is Truman a true man, he is the only genuine person in his fabricated world, and as such he is willing to die in search of something real. After the man-made storm there's a shot of Truman unconscious on the sailboat with his head back and his arms outstretched like Christ on the cross. At first we're not sure if he's alive or dead but he revives (ressurects?) and continues on his mission.

The Truman Show is also about voyeurism and, as Eric said, it was prescient in its portrayal of reality television. Some of the best scenes in the movie are those of the fans that obsessively watch the show, as well as the scenes where Christof is “directing” Truman's life. In particular the moment Truman reunites with his “father”.

Another idea The Truman Show brings up is the human tendency to feel as if we are the center of the universe. As kids didn't we all, at one time or another, imagine we were starring in our own reality movie? I know I did. And today, if they had an open casting call for someone to volunteer to live in Truman's world as the star of the show, I have no doubt that the producers would have thousands of people lined up for the chance.

The entire cast is terrific, with Laura Linney and Ed Harris being the standouts. I like how as an actress her character has really committed to playing Truman's wife – up until a point anyway. And Harris brings some humanity to what could have been a one dimensional villain role. Of course it is Jim Carrey's multi-layered performance that holds it all together. He may always be considered first and foremost a funny guy – but he really can act. He brilliantly conveys Truman's growing confusion and frustration as he slowly discovers that every relationship he's ever had was scripted and that his entire world is a set full of props. Even the bay is fake – it was shot on a flooded parking lot at Paramount Studios.

Jim Carrey was the perfect actor for the role just as Jimmy Stewart was the perfect actor to play George Bailey in It's a Wonderful Life. The reason I bring that up is because in some ways Peter Weir's The Truman Show is an homage to that Frank Capra classic. The movie Truman watches in one scene is clearly based on It's a Wonderful Life. But more importantly, Truman is trapped in Seahaven just as George Bailey was trapped in Bedford Falls. Of course George Bailey was a victim of bad timing and familial responsibilities whereas Truman Burbank is really a prisoner of his own fears. And that is the final message of The Truman Show. Unlike George Bailey, who learns to love and accept his "prison", Truman Burbank discovers that freedom is worth any price, even if it means leaving the Garden of Eden (or your parent's basement) for the big unknown outside world. 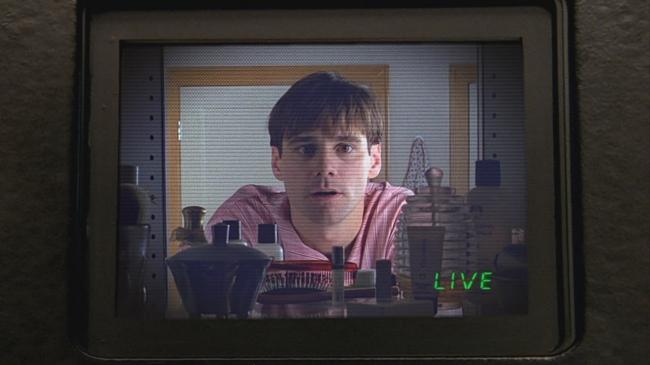 Jim Carrey in The Truman Show.

Like Patrick, I was distracted upon my initial watching by the implausibility of the premise and to be honest, I was still distracted by it this time. Patrick makes 2 valid points about the unbelievability of the situation, but there is much about this premise that just doesn't make sense. First of all, who would watch this show? Yes, I'm aware many people watch trashy reality television shows, but none of them are about an ordinary man living a very ordinary life in small town America. They're about famous people living in glamorous situations. And none of these shows are on 24 hours a day for 30 years! I mean, how would the show have survived even the first year? Were people tuning in to watch a baby sleep, burp, and poop? It would have been canceled before Truman turned one. And is Truman's wife Meryl such a dedicated actress that she's willing to live in his world 24/7? Too much of the situation just doesn't make sense.

With that in mind, this movie only works on a deeper level. Truman's quest for the truth and for freedom is one that is universally relatable. He wants to know what is going on and when he finally learns the truth and is offered the chance to stay in the world constructed for him where he will be eternally safe or to venture out into the real world with all its unknown dangers, he chooses the freedom and the dangers. He is Adam, rejecting God and Eden in exchange for his free will.

I also agree with Patrick that the performances are terrific. Some of Carrey's work from the 1990s is so over the top as to be unwatchable now, but he really reins it in here. He brings genuine warmth and humor to the part of Truman. As Patrick said, he really can act and he proves it. Laura Linney, who I don't think I've ever seen give a bad performance, is also as good as Patrick claims. Harris is okay, but like God he remains unknowable and I never felt like the film got under his skin.

In many ways social media has made much of this movie moot. Anyone with an internet connection can now broadcast their lives in a steady stream across Facebook, Twitter, Instagram, Vine, Snapchat, YouTube, Tumblr, and Pintrest. Instead of hiding the fact that their lives are being broadcast, people want it to happen. As Patrick said, as children we all tend to believe we're the center of the universe and for many people it's a feeling they cling to. Instead of running away from the spotlight as Truman does, they flock to it.

There's a lot to like about The Truman Show and it does make you think, which is something all too rare in a big budget Hollywood film. For that alone it deserves credit. It's an interesting concept, but it feels like a flawed delivery. Too much of the situation doesn't stand up to close scrutiny.