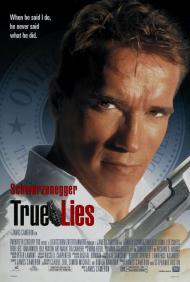 True Lies is the film that best shows how James Cameron too often overdoes things.  At nearly two and a half hours long, and a then record setting budget of 120,000,000, Cameron was definitely thinking bigger is better.  Most of this movie is well worth the time and money, but some scenes just do not know when to stop.

True Lies opens with a James Bond type teaser.  In fact, it steals many ideas from 0007 movies.  Harry enters the grounds of a European Mansion via scuba diving under the ice.  He takes off his wet suit to reveal a tuxedo, (Goldfinger).  He steals some Intel, meets a hot chick, Juno, does a tango, (Never Say Never Again), and ends up being chased in the snow by guys on skies and snowmobiles, (For Your eyes Only).

Harry is a spy, but his dowdy wife, Helen, and 14 year old daughter, Dana, think he is a businessman, who takes lots of trips.  His constant time away has turned his wife to the attention of another man, while his daughter is heading down a bad path.  She steals from Harry's partner and has a boyfriend who rides a motorcycle.

Juno ends up being involved with some terrorists.  True Lies was made before Hollywood became neutered by 9/11.  The terrorists are Islamic terrorists. You know, the guys who have been responsible for nearly every act or terrorism of the past 20 years, but Hollywood has been too chicken shit lately to portray. No one actually calls the bad guys "Muslims" but they call themselves "The Crimson Jihad."  The word "Jihad" is a Muslim word meaning a holy war against infidels.  16 years later Cameron would make the bleeding heart environmental message film Avatar, but here he comes across as nearly conservative.

In a very long action sequence, Harry gets into a fight with several terrorists in a public bathroom, and then a gun fight with a third, who he then chases after.  The bad guy steals a motorcycle while Harry pursues him on a horse across town, through a hotel, and up an elevator.  It is a great scene, but the bad guy gets away so what was the point?  Even worse is that the movie then suddenly shifts plots.

Harry overhears a conversation Helen has on the telephone, and believes she is having an affair.  Harry and his partner discover she is talking to Simon, a used car salesman who ironically pretends to be a spy to attract bored housewives.  Although Paxton has a few funny lines, far to much screen time is given to Simon.   When Helen says she does not want to have sex with him he pleads, "If not for me, Helen, do it for your country!"  When Harry threatens to kill him, he cries," I have to lie to women to get laid. And I don't score much. I got a little dick, it's pathetic!"  He then pisses himself.

A disguised Harry abducts Helen and treats her like a spy, as if Simon was telling the truth.  After she admits under interrogation that she still loves her husband, Harry devises a plan to have her meet a strange man in a hotel and plant a fake bug.  It is actually him, and he thinks it will be a romantic night for him to tell her the truth.

The scene where Curtis walks into the hotel with her glasses on wearing an ugly dress is classic.  Just before entering the room she looks at herself in a mirror and gives herself a sexy makeover.  In the room she does a sleazy dance in her underwear and things are about to get hot and heavy, when suddenly the original plot breaks back in and abducts them.

True Lies is based on the French film La Totale! (1991), With Cameron given screenplay credit for this version.  Cameron has always been a better director than he is a writer.   Some of the dialogue works.  When Harry and Helen are captured and tied up, Juno drapes herself over Harry and smiles at Helen.  She asks him if he told Helen about, "us."  Schwarzenegger then does his best acting in the movie, "There is no us, you psychopathic bitch!"  He says it with complete conviction, not like he is playing to the back row as he so often does.

For every good line there is a bad one.  At one point Helen slaps Juno.  This pisses her off so bad she pulls a gun and is about to kill Helen when she is stopped, because they need a hostage.  Juno then gives this harsh line, "Ok, Suzie Homemaker. Let's go."  Really?  You were so ticked off that you were ready to kill her and that is the best line you could come up with?

The movie ends with lots of action and a big explosion.  A nuclear explosion to be exact.  Harry and Helen fight and shoot their way out of captivity, only Helen gets caught again, forcing Harry to rescue her from an out of control limousine with a helicopter, while being shot at, while Helen is fighting Juno in the limousine, and doing it before the car goes off the blown up bridge.  Just when you think the movie reached it's big action packed conclusion, Harry has to go save his daughter using a Harrier Jet.

The action scenes are all gloriously over-the-top and fun.  The money was well spent.  I just wonder how big is Cameron's ego, that he could not better edit this movie.  La Totale! runs 20 minutes less.  Although Paxton is worth a laugh, his part should have been drastically cut.  True Lies is a romantic comedy book ended by an action film.   Both parts are entertaining, but the actions scenes are so big that they make the middle of the film seem superfluous.