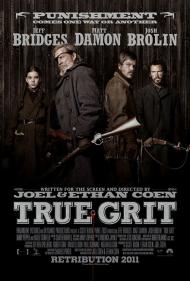 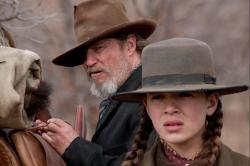 I was very apprehensive about seeing this remake.  How could anyone fill the shoes of John Wayne's most famous role?  The Duke was larger than life and dominated the screen like few actors could.  What were the Coen brothers thinking?

After the murder of her father, 14-year-old Mattie Ross arrives in town to settle his business and find his killer, Tom Chaney.   She hires old drunken Reuben J. "Rooster" Cogburn, because she thinks he has true grit, to find him.   Mattie tags along and they join up with a Texas Ranger, LaBoeuf, who has been pursuing Chaney for months.

The first thing to note is that while Bridges does not have the cinematic authority of Wayne, he does do the role justice.  Wayne played it bigger, while Bridges does a more authentic interpretation.  His long gray hair and unkempt appearance seems quite real.

Brolin and Pepper are only in small roles near the end.  Pepper has some awful teeth and Brolin talks like his mouth is full of cotton.  Damon is good as the slightly insecure Ranger.  You never know if he is as good as he claims.

The real stand out is Hailee Steinfeld.  She is 14 years old in real life, yet she plays her character with the confidence of a veteran.  She deserves a best supporting actress nomination.  My favorite scene is when she haggles the price of her father's horses, and then returns the next day and buys back one of the horses for a song.

Kim Darby was 22 years old when she originated the role.  She and Glen Campbell shared a certain level of sexual chemistry.   In both films the Ranger spanks Mattie, but as Steinfeld is a minor it does not smack of foreplay this time around.

The classic reins in the teeth scene remains, as does the snake pit.  My 17 year old had never seen the original but liked this one quite well.  I doubt it will become a classic film for his generation as the original did for mine, but it is a worthy film none-the-less.

I have often thought the Coen brothers are over rated, having made a mixed bag of movies.  This is one of their better films and is by no means any less of a film than the original. 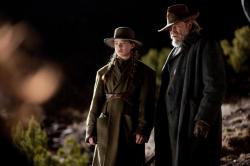 Like you Eric, my first thought when seeing the preview for this movie was simply, "Why?".  Why try and remake such a classic movie that featured such an iconic performance by the Duke himself?  Oh sure, the Coen brothers talked a lot about how they weren't remaking the original, they were making a movie from the book, but since the original never strayed that far from the book either, they were never going to be able to avoid comparisons.  As it turns out, the story is strong enough and the performances and the direction quite good enough so that it turns out there is room for two versions of this story.

I always thought that Kim Darby as Mattie was one of the best parts of the original and Hailee Steinfeld is easily one of the best parts of this one.  Eric, you mention her being nominated for supporting actress and I agree that her performance is award worthy, and based on the nominations she's received so far, it does seem to be that people are putting her in the supporting category, but if she isn't the leading actress in this movie, then I don't know who is.  It seems as though the producers just think she'll have a better shot at winning supporting, so that's the category they're putting her in.

The thing about Wayne is that even though he did a great job as Rooster, you never forgot that it was John Wayne playing him.  Here though, Bridges does a great job of burying himself in the part.  He doesn't have the star power of Wayne, but I really enjoyed his interpretation of the character.

Given that Campbell was one of the worst things about the original, Damon is a great improvement here.  And I'm very glad that they toned down the sexual chemistry between his character and Mattie's.  His is a much richer character here than Campbell's version.

Production wise this movie has the benefit of today's technology and it looks brilliant.  You can not fault the Coen's eye for setting up scenes.

My one and only complaint is that some of the dialogue comes across as too formal and sometimes forced.  The manner of speech may be taken directly from the book and it may even be close to how people of the period would have spoken, but it rings false in the mouth of some of the actors.  It's not so bad when Mattie uses the formal language since I assume she has received some education, but the criminals also speak in the same manner.

I'm sure that some people will still cry blasphemy that they remade this movie, but as you say Eric, this is in no way a lesser film and there is certainly room for both of them. 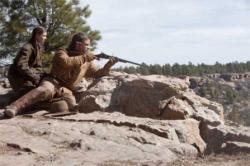 The Coen brothers color within the lines but bring little that is new to the story. Is it good enough to stand the test of time? Maybe. There have been instances where beloved movies got remade in the past and both versions were hailed as classics. But it's rare. Love Affair and An Affair to Remember being one example off the top of my head. Whenever I get the urge for True Grit in the future, however, something tells me it will be for the original movie.

Jeff Bridges is a more realistic Rooster Cogburn but this diminishes the impact of his big scene. It was the only time in the movie where he clearly paled in comparison to the Duke. John Wayne’s Rooster makes you want to stand up and cheer when he puts those reins between his teeth and starts shooting with both hands while charging the bad guys. Bridges knows he can’t compete so he says the line quieter, almost as an afterthought.

Hailee Steinfeld is a very competent young actress but I think her performance has been a touch overrated. She handles her dialogue well but plays Mattie a bit too precociously for my tastes. And she left me cold emotionally. In my book Kim Darby still owns the role. I did enjoy the postscript the Coen brothers added where we see how Mattie ended up. It is the only scene that wasn’t in the original.

Matt Damon is a big improvement on Glenn Campbell. I agree about that, although it seemed to me like the Texas Ranger’s part is smaller this time around. I also never noticed in the old version how just when both of these experienced trackers pronounce the trail cold Mattie walks smack into Tom Chaney.  He and his entire gang were just across the river but neither Rooster nor LaBoeuf had a clue? This never really gets explained.

As far as remakes of classic movies go the Coen brother’s True Grit is one of the better ones. 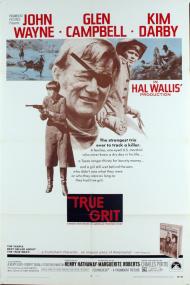