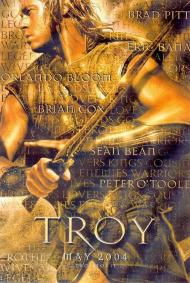 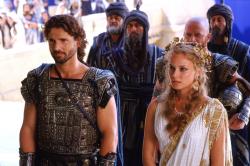 Although I did eventually read The Iliad, I have to confess that my first exposure to the story of the Trojan War came from reading a Classic Comic adaptation of that epic tale. The characters and the battles fired my young imagination in a very real and lasting way. I was therefore justifiably curious to see whether this cinematic version could live up to my childhood memories. I can very happily report that it not only equaled my memory, but surpassed it in many ways.

The story is told on an epic scale. Reports of a ballooning budget plagued this movie's production. After watching it, I can tell you that the money was well spent. A combination of enormous sets, a cast of thousands, and the magic of computer-generated imagery bring this story to life to such a degree that it appears as if it was filmed in an ancient Greek city rather than on modern sets. The sheer look of this movie is entertainment enough.

It is not, however, the setting of this story that has kept it alive for thousands of years. It is the characters. There is Paris (Bloom), the young Trojan prince who steals the Greek queen Helen from her husband and sets the whole war in motion. There's Hector (Bana), Paris' elder brother and Troy's greatest warrior. Leading the Greeks is Agamemnon (Cox), the power hungry King looking to conquer as much of the world as he can get his hands on. And last, but hardly least, there is Achilles (Pitt), the greatest of the Greek soldiers. It is their deeds that have kept this story alive.

Only one element is missing from this modern retelling, and that is the Gods themselves. While in the original tale, and in the Classic Comic version for that matter, the Gods played active roles in the battle, here they are worshiped, but never make an appearance. It gives the story a more realistic tone, but I do wish the filmmakers had found a way to work them into the movie.

There's no denying this is a bloody and violent film. Using thousands of extras and then replicating them digitally, the battle in front of the walls of Troy, as the armies clash is one of the largest battle scenes ever filmed. And Achilles' men storming the Trojan beach is remarkably like an ancient version of the storming of Normandy.

If there is one weakness to the film, it is the somewhat melodramatic dialogue. But this is a Greek tragedy and it fits the mood of the story.

The cast is superb, with Pitt and Bana getting the best roles. Bloom, in a bit of bravery as an actor, plays a moment of cowardice as Paris, which had several members of the audience actually booing him. A buffed up Pitt gets the sexier role as Achilles, but it is Bana as Hector who is the real hero of the piece. And of course, Peter O'Toole brings a bit of old time movie acting class to the modern production.

Before Achilles goes off to fight in the Trojan War, his mother warns him that if he stays and does not fight, he will marry, have children, and lead a happy life, but his name will be forgotten. If he should go to war, he will meet his doom, but his name shall live on for all eternity. Judging by the fact that this movie is being made now, some 3,000 years after the war ended, it is easy to see which road he chose. 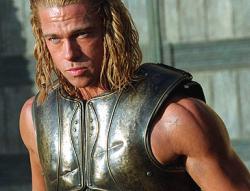 Yes the dialogue is too often too much. Yet my big complaint with this film is motivation. Why anyone does anything is vague. Okay, Agamemnon is out to control the world and Hector is an awesome leader. Everyone else seems to have little-to-no reason or motivation for doing what they do.

Achilles is the greatest warrior of his time. In mythology, it is because his mother held him by his heels and dunked him into the river Styx. Thus he could not be hurt on any part of his body except his heels, for they never submerged into the water. As Scott mentioned, the Gods and all the Greek mythology do not exist in this movie so it never explains why he is the best fighter around. He just is. It also never explains why he constantly goes to war for a king he does not like.

Paris and Helen have an affair that results in thousands of deaths. Just because two people love each other is by no means a reason to allow thousands of people to die. Helen is nothing more than a hot piece of ass. Once in Troy she explains to Paris that they and Troy itself is doomed because of their affair. How come this insight didn't come before she left Sparta? She could have saved a lot of people a lot of trouble.

The characterization is all wrong. Pitt plays Achilles as a sensitive, introspective killing-machine. I know, that makes no sense. Achilles should have been played up with an ego to match his biceps. That would have explained why he always went to war; killing feeds his ego. The only reason this movie gives for him going to Troy is that his mother has the amazing ability to know that it will all end in an epic novel and movie.

Scott mentioned the boos for Paris's cowardice. In my theatre, people laughed when the girl holds a knife to Achilles throat and then rolls over and has sex with him. Her character made no sense whatsoever. In another scene Achilles threatens to kill one of his own men. This chick runs over and tells him to stop. This is a man who the day before killed priests that she worked with. Achilles must have that James Bond sperm. As soon as it gets injected into a woman she changes alliances and loyalty.

Eric Bana does a good job as Hector. I almost forgive him for Hulk. Almost. Hector is the only character worth rooting for. He has honor and courage. Most importantly he has motivation. He is protecting his country and his family. He just should have ordered his archers to fire when Achilles showed up at the gate.

Like Scott, I would have liked the presence of the Gods. That would have explained why people did what they did. In the real story the Gods manipulated the mortals all the time. They each took sides in the war and contributed greatly. 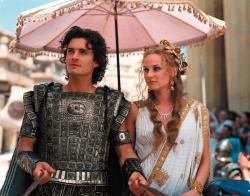 I'll jump right in and say that I liked the melodramatic dialogue. I eat up lines like when Hector tells Agamemnon, 'No son of Troy will ever submit to a foreign ruler!' only to be told, 'Then every son of Troy shall die.' in an equally molodramatic voice. Or when Achilles states to Hector, 'Before my time is done I will look down upon your corpse and smile.' I don't see how my brothers can complain about these speeches. This is the type movie hammy dialogue was made for. DeMille himself would have approved. In fact, in many ways Troy is like a classic DeMille production from yesteryear.

Now here's where my review is going to sound rather strange. Other than the dialogue complaint, I agree with both my brother's reviews.

First of all there is no question that the Gods should have been worked into the story. It is not really the story of The Trojan War without them. Achilles' death makes very little sense without his mythical powers. And Peter O'Tooles' big scene needed a better explanation than the one given. After Hector is killed, King Priam sneaks down to the beach, somehow evades thousands of Greek soldiers, and sneaks into Achilles' tent in order to beg for his son's body. When Achilles' asks how he got there King Priam says, 'I think I know my own country better than any Greek.' In the original story he is given assistance by the Gods in the form of fog. Speaking of O'Toole, I'd like to start his Supporting Actor Oscar campaign right here and now. This scene is the finest bit of acting in the entire movie.

Upon reflection I think Eric makes a good point about Achilles' characterization. Pitt should have played him more arrogant and conceited. And although I think his motivation is clear enough without it (his reluctance to fight - before his cousin Patroclus is killed - and his disdain for Agamemnon is sufficiently explained) I would have preferred seeing Pitt ham it up like Charlton Heston. Physically he so perfectly embodies the role that a little showier and more aggresive personality would have made sense.

As for the sheer entertainment and spectacle of Troy I agree with Scott. This is a highly enjoyable movie-going experience with a near-perfect blend of action, dialogue and larger-than-life characters. And thankfully the CGI's are never allowed to distract. Visually Troy is flawless.

I have to at least mention Orlando Bloom. With Troy he continues his legacy as this generation's Errol Flynn. After The Lord of the Rings trilogy and Pirates of the Caribbean it is a safe bet to call him the new swashbuckler. Producers take note: put a bow & arrow or a sword in his hands and watch the box-office receipts stack up.

One test of a movie is whether or not I plan on buying it on DVD. Forgive me if I sound like Agamemnon for a moment. Troy shall be mine.