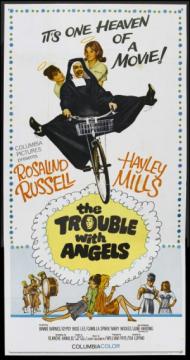 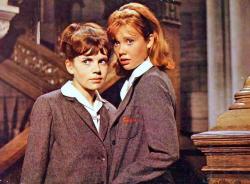 The Trouble with Angels is a charming chick movie. Although not a Disney movie, it certainly feels like one. This is mostly due to the presence of Disney star Hayley Mills. At 19 years old this would be her last good movie.

Mills plays Mary, a precocious, strong-willed trouble maker. She befriends the meek Rachel on a train ride to a private catholic girls school. Mary introduces herself as Kim Novak. When the girls first see their castle like school, Rachel remarks that, 'The only thing it's missing is a dragon.' The scene then jumps to a close-up of the Mother Superior, played by Rosalind Russell.

The movie covers the four years of high school for Rachel and Mary. They have little adventures. They get into a lot of trouble. They skip swim class by inventing different illnesses each time. They get caught smoking cigarettes and cigars, more than once. They nearly get expelled. I picture Mary and Rachel like a high school version of Laverne and Shirley. Sure they get into trouble, but it is never that serious.

This movie is directed by a woman, Ida Lupino. Men have only a few scenes and little dialogue. It is kind of refreshing. If this movie were remade today I could count the minutes before Mary or Rachel would be sneaking a boy into the school. Consider that a mere 15 years after this movie was made, Tatum O'Neal and Kristy McNichol made Little Darlings in which two teenage girls have a contest to lose their virginity. I will wager that if this movie were made today, it would contain all kinds of sexual references but eliminate the politically incorrect smoking scenes.

The supporting cast is notable for a couple of members. Famous stripper, Gypsy Rose Lee has a small role as a dance instructor. Mary Wickes plays a nun. A quarter of a century later she would get back into the habit, and again play a nun in Sister Act.

Trouble with Angels plays out in episodes. Yet it has a slightly surprising and satisfying enough ending. Although a movie obviously made for girls, it is nice to see that it doesn't play to the lowest common denominator. Mary and Rachel get into trouble, but they grow and learn without any major rebellious attitude. Sure it was made nearly 40 years ago, but that is the fantasy of movies; to visit a place that you might sometimes wish were real.

Hayley MIlls and June Harding in The Trouble with Angels.

As a comedy this movie made me chuckle a few times and I smiled more than once, but it is at heart a drama. The relationship between Mary Clancy and Mother Superior is a wonderful one. It develops from one of animosity and tolerance to respect and affection without seeming forced or contrived. Mary Clancy grows up and along the way helps Mother Superior reveal her inner self.

Most of the humor, as well as the plot, consists of Mary and Rachel breaking rules and getting caught by Mother Superior who ends the scene with a wise and witty form of punishment. Rosalind Russell had impeccable timing and a great deadpan delivery. She combined glamour with mugging and was an obvious influence on Lucille Ball. She aged like a fine wine and gives a sparkling performance filled with great depth of emotion as Mother Superior.

Hayley Mills is good too. She makes Mary real without revealing much about her to the audience. The script much more clearly defines Rachel as the follower than it does Mary, the rebellious leader. We are given insight into her home life but only a few details.

As a boy I remember both my mother and grandmother enjoying this movie. I understand why they did. I agree with Eric that it has charm. The ending is quite touching. When Rachel tells Mother Superior that Mary didn't choose to become a nun, but rather she yielded to pressure. Mother Superior replies, “No she chose, and I would rather have one who chooses than a hundred who yield.” It's a great line and Russell delivers it perfectly.

Audiences expecting the level of humor in the Sister Act movies will be disappointed. This one has a gentle humor and a tug at the heartstrings. 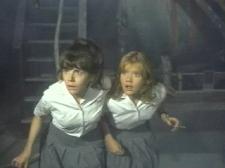 I liked this movie so much that I think I forgive Rosalind Russell for inflicting Auntie Mame upon us.

Sure this is a movie that takes place at an all girls school, has a nearly all girl cast and was directed by a woman, but that doesn't limit its appeal. Its themes of growing up and maturing are universal and aren't limited to just women.

Patrick you make a very good point about the evolution of Mary from the "bad girl" to one who becomes a nun not seeming at all contrived. In fact it seems completely natural. I do think though that while her character is revealed in much more of a subtle manner, I feel like I know her just as well as I know Rachel.

While I wasn't expecting a total comedy, I think it's funnier than you let on Patrick. It's also heart warming, but not in a lay the sentiment on thick with a trowel, but in the genuine meaning of the phrase.

You're wrong about one thing Eric. You say "if this movie were made today...." Somehow I don't see this movie being made today at all. It presents religion as a good thing and pokes fun at a progressive (read Liberal) school. Two things you don't usually see in a movie made today.