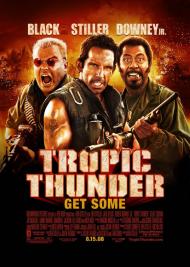 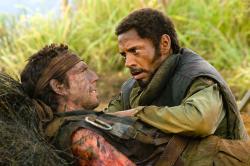 From the moment the first fake, pre movie, commercial for Booty Sweat energy drink and Bust-A-Nut candy bar, appear on screen you know that Tropic Thunder is a film that plays by its own rules.

Three movie stars: an action hero, a comedian, and a five time Oscar winner team up with a rapper and a rookie actor to film a Vietnam war movie. The movie is over budget and the actors are a pain in the director's ass. To get them better into their roles, they are dropped into a real Asian jungle. They are told that the jungle is full of cameras that will catch their every movement. Before long, they find themselves in actual battles fighting a drug manufacturer.

Stiller and Black play familiar characters. Stiller plays an insecure action hero. Black plays an over weight comedian who stars in lowbrow films. Downey Jr. is the real treat here. As the award winning Australian actor, playing a black American, he steals every scene. When dropped into the jungle, the director takes everyone's cell phones, "They didn't have cell phones in 68. I'm authentic from head to toe." He gets so into his character that at one point he says, "I don't break character until the DVD commentary."

One of the biggest surprises, for me, was Tom Cruise. He plays an extremely rude movie producer who uses more four letter words than any other. He abuses everyone around him. "Seriously, a nutless monkey can do your job." He tells his assistant. If you ever wondered how good of a dancer Tom Cruise is, and lets be honest, who hasn't, you get your chance to find out here.

Much has been made, by the media desperate to start a controversy, about the use of the word "retard". Stiller's character once tried a dramatic role, playing a mentally handicapped. The movie bombed. At one point Downey Jr. explains to Stiller that the movie failed because, "You went full on retard." Instead of just partially, like Tom Hanks in Forrest Gump.

Tropic Thunder is a hysterical farce that will have you laughing throughout most of the movie. I laughed hardest when Rick Peck said, "A hooker. Oh Jesus, you killed a hooker!" You have to be there. However, too often foul language seemed inserted into the script whenever the writers ran out of creative dialogue. Swearing has its place in movies, but it alone is not funny. 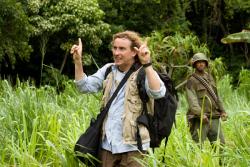 It must be the parent in you Eric, because I never even noticed the swearing, or at least it never stood out to me that there was more swearing here than anywhere else.

I found the Tom Cruise thing to be almost more odd than funny. It is amusing, but it's more the shock of seeing Cruise in the role than anything else.

And speaking of shock, this movie has one scene that did shock and make me laugh at the same time and that was the fate of the movie's director, played by Steven Coogan. I don't want to give the joke away, but it's one I didn't see coming and the results are milked for all they are worth.

Overall I've been pretty disapointed with Summer 2008's offerings. It's nice to see the season going out with at least one high note like this one. 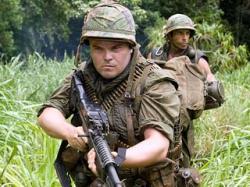 Tropic Thunder is very funny and action packed. Ben Stiller knows how to use stereotypes and clichés in ways that are hilarious and refreshingly not politically correct. Stiller makes like Rambo, Black's multiple-character fatsuit movies are clearly based on Eddie Murphy, and Downey Jr. does a hilarious send-up of Russell Crowe. Then you have the bling-&-booty rapper with a secret and the one level-headed character in the rookie. Tom Cruise gives the most blistering stereotype as the foul-mouthed Jewish producer. But he does prove that he can still bust a move.

The over-the-top gore, ala Saving Private Ryan, that opens the movie harkens back to Monty Python, although in the scene Scott mentions with the director, Stiller doesn't know when to yell cut. I agree that Downey gives a great performance but I also thought that Black's junkie withdrawal hit all the right notes. To spoof properly you have to take reality and then exaggerate it. Black does this perfectly.

Ironically Stiller has the least interesting and funny character. Fortunately this is an ensemble and the focus never stays on one character too long. Nick Nolte has a small but important part as Four Leaf Tayback the grizzled Vietnam vet who wrote the book the movie they are making is based on. But like many things in life he is not exactly what he seems.

Is the humor in Tropic Thunder offensive? You bet your nasty ass it is and that's what makes it the funniest movie of the year.