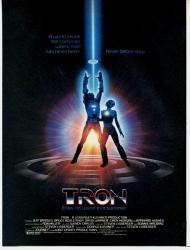 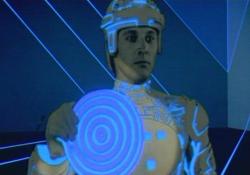 Tron was made at the advent of the video game craze.  In 1982, video games were played in public arcades.  Video gaming was still a social event, that actually involved leaving your home.

The movie starts with arcade owner, and former computer hacker Kevin Flynn.  He gets talked into breaking in to a company and hacking into it's computer.  He ends up however, going over the rainbow and literally finds himself put into the computer system.

In this computer, every program is a living "person."   He joins forces with Tron, a security program, to shut down the Master Control program.  In the process, they have to play the Tron games with the discs, tanks and the most famous one with the motorcycles.

The graphics are expectedly outdated, but not so much that it is laughable.  Because it all takes place in a fantasy setting, it is easy to excuse the rudimentary animation.   The scenes inside the computer have a very unique look to them.  They were filmed in black and white and later colorized.

No doubt my computer savvy brother, Scott, could better describe the technical aspects and errors of this movie than I.  For me, Tron seemed like a techno/action version of The Wizard of Oz.  Flynn goes to a fantasy word.  He meets some friends.  They journey to see the most powerful person in the "land."  A scene near the end, where they finally talk to an old program, looks like it takes place in Oz.   Another aspect that mimics that 1939 classic is that everyone with a significant role inside the computer world also has a role in the real world.

You could easily read plenty of political symbolism into this movie as the computer world is run by a dictatorship where those who do not stay in step are put in jail.  When Flynn is first addressed inside the computer with other new programs in training, he is told, "Those of you who continue to profess a belief in the Users (humans) will receive the standard substandard training that will result in your eventual elimination. Those of you who renounce this superstitious and hysterical belief will be eligible to join the Warrior Elite of the MCP."   Thus the ruling power is attempting to control the populaces thoughts.  Paging George Orwell!

Tron was not the box office giant it was expected to be.  With a, then, staggering budget of $17,000,000, high hopes were riding on it's success.  Although it eventually made a profit, it was not the box office juggernaut it was intended to be.  The films lackluster business has been blamed on E.T.: The Extra-Terrestrial.  It opened just a few weeks prior and was still doing better business than any other film opening 5 weeks later.  To put this into perspective, E.T. cost $10,000,000 to make and made it all back and then some in it's first week alone.   By the time Tron opened on July 9th, with a $5,000,000 weekend, E.T. was still raking in $20,000,000 a week.  It never stood a chance, but then, what movie would have? 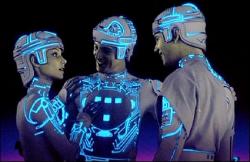 Tron might not have been as big a hit as E.T., but it has gone on to develop a cult following, growing in people's esteem as time goes by, which is why we're seeing a sequel to it being released in 2010.

Hollywood has never gotten computers right and what I like about this movie is that it never even tries.  A big problem with making a movie about hackers or programmers is how do you make watching someone type on a keyboard, interesting?  Tron takes the creative leap of simply bypassing someone typing and imagines what it would be like actually inside a computer.  None of it has any basis in reality of course.  The writer's and developers make no attempt to model the world inside the computer upon any real computer terminology or architecture, but it's all done so creatively that who cares?  This isn't a documentary.  And by avoiding the terminology of the day, it avoids sounding too dated with its dialogue.

I think the graphics and special effects hold up remarkably well considering that most of them are hand drawn animation.  Very little of the effects are created by a computer.  Any scene where you can see an actor in shot, the effects are hand drawn because they had yet to develop the technology to combine CGI with live actors.  Remarkably Tron wasn't nominated for any Technical Oscars because the Academy accused the Tron producers of cheating with their effects by using computers!

The plot of the movie is simple and very lightweight, but it's played very light and fast paced.  The only actors who make an impression are Jeff Bridges and David Warner.  Bridges is good as the cocky programmer and Warner makes a good villain. Boxleitner, on the other hand, is fairly wooden and generic and almost anyone could have played his part.

Another interesting bit of trivia regarding Tron and E.T. is that both of them had video game adaptations released at the same time as the movie.  The Tron game was a great success and is generally considered to be an early arcade classic.  The E.T. game, developed for the Atari 2600, has been called Atari's biggest mistake, as well as the largest financial failure in the history of the video game industry.  Urban legend, never verified, is that thousands of unsold E.T. game cartridges were crushed and buried in a landfill in Texas.  So perhaps Tron did get one last laugh. 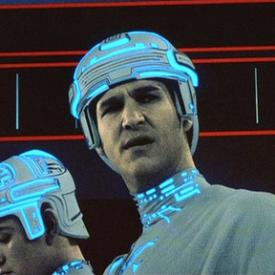 Jeff Bridges as Clu in Tron.

Spielberg’s lost alien did rain on Tron’s box office parade. I remember seeing E.T. twice in theaters when it came out but until now I had never seen Tron even once. Now that I have all I can say is, “Greetings, programs!”

Although the visuals in Tron are dated they are still pretty cool. The lack of camera movement in the scenes inside the computer gives the movie an old-fashioned style. In fact some scenes reminded me of the silent classic Metropolis. The art direction certainly deserved more credit than the Academy gave it back in 1982. And as fantastic as this interpretation of the cyber world is it is probably the first time most people were ever exposed to that concept. In that regard Tron was truly groundbreaking.

The story and characters (two heroes and a femme fatale going on a quest) as well as the camera angles in the scenes set in the real world have a film noir style as filtered through the prism of the colorful 1980s. I agree that Jeff Bridges steals the movie. He brims with boyish charm and immense likability.

He also gets the best lines like when he first arrives in the techno world he innocently says, “Look, just so I can tell my friends, what this dream is about, okay? Where am I?” And later he says my favorite line, which ties in with your Wizard of Oz analogy Eric, when he states, “On the other side of the screen, it all looks so easy.” Instead of going over the rainbow he goes behind the screen.

I’m not surprised Tron has grown in stature over the years and attained a cult following. It is not only a still entertaining movie but it stands as a cinematic souvenir of the dawn of the cyber age. The technology it presents is incredibly primitive but the basic idea of it is as fresh and relevant (actually probably more so) today than it was in 1982.