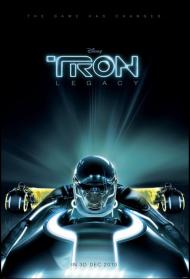 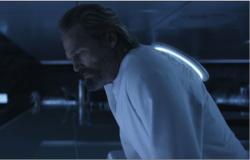 I complimented Yogi Bear for being merely a fun film.  I would like to do the same for TRON: Legacy, but cannot.  It is so full of flaws and plot holes that it never makes sense.  I know, I know, it is a fantasy film, but some rules have to be followed.

Tron creator Kevin Flynn disappeared in 1989, leaving behind his young son, Sam, to be raised by his grandparents.  Sam is a depressed ingrate.  The movie opens with him sneaking into a company, that thanks to his Dad, he is the major share holder.  The current CEO is about to make a ton of money for the company with the announcement that they have some new software or what not.  Sam releases it instead to the public for free.

Lets stop here.  Sam lives a life of zero responsibility, as he has all the money he will ever want because of the success of this company.  By giving the product away, he hurts the company and perhaps his own future financial situation, not to mention thousands of people who work directly or indirectly for him.  The writers treat making a profit as somehow evil?  Really?  Who do they think pays the taxes in this country?

I go on this rant to make a point.  None of  this plot angle is at all needed.  It is intended to show Sam's personality and his resourcefulness, but all I got out of it was what a liberal minded moron he was.

As a child Kevin told Sam stories of his adventures from the first movie.  Sam believed and loved them all.  When Kevin disappeared, Sam never thinks that he may have gone back.  Even as an adult he says he has no idea where he is and that he could even be on a beach in Costa Rica.   Really?  His dad went into a fantasy world and is now missing, and it never occurs to this genius that maybe he went back?

Kevin is the creator of the TRON world but it is actually a prison of his own design.  He hides out with a girl program, Quorra, outside the city.  He is hiding from his evil clone, Clu, who in 20 years has not been able to find him. Even though  he is not that far away and has an army at his disposal.

Sam eventually finds his dad's old secret computer lab and goes into the world of TRON.  He is stripped by some hot girl/programs and given his TRON suit.  Quorra finds Sam and takes him to meet his father, who has become a long haired, robe wearing guru, "You're messin with my Zen thing man."  Kevin asks his son about the real world.  Sam responds with liberal talking points, "The rich are getting richer and the poor are getting poorer.  The ice caps are melting."  Their reunion is only slightly emotional.

Of course the special effects are astounding.  It is mostly notable in the games.  The disc competition defies gravity while the light motorcycle competition has different levels.  Getting onto their cycles as well as the new jets, looks cool as hell.

TRON: Legacy is often wondrous eye candy but it has very little plot.  It rips off Star Wars twice.  Once Kevin acts like a Jedi trying to get a guard to do what he wants.  Another has Sam acting like Luke shooting down X Wing fighters from the Millennium Falcon gun turret.  Not only do humans go inside a computer, but they take a program outside into the real world as an actual human.  I know it is a fantasy film, but WTF?   Even my son asked me if humans go in and remain human, wouldn't a program come out as a program? 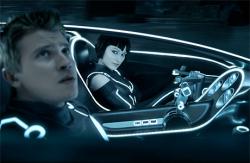 Since many of the original personal computer pioneers were hippies, it doesn't surprise me that Kevin Flynn would be a bit of one. Since Open Source software is also quite common, the idea someone would want to give away an Operating System is also within the realm of possibility (Linux anyone?). Not that I think Sam is really giving away the software because he believes in some higher ideal. He's just rebellious and young seeing what he can get away with to get the attention of a missing father. Eric, you seriously let your own pet peeves get in the way of enjoying this movie.

I assumed that the best thing about this movie would be the visual effects and so I decided to go all out and watched it in IMAX 3-D. Given that, yes, the plot is a bit weak I'm glad I did because the visuals, especially on such a large screen, were truly impressive. This is definitely the type of movie that you need to see in a theater. Like you said Eric, this is most evident during the games. The light cycles, now with multiple levels, is fun, but the disc fight is better. It is during those sequences that the movie really shines.

If only as much time and effort had been put into the story. As I said, it didn't bother me that Kevin is a hippy, now living like some Zen master in the mountains of the grid, but what bothered me is the pseudo techno-babble he spouts that is completely meaningless. He talks about a new life form being created, but everything on the grid is just digital, so how is it possible to create new life? All you've created is a new combination of 1s and 0s. Taking Quorra into the real world would be creating new life, but just how that's accomplished is simply glossed over. Although, given that in this movie the technology to insert people into computers and take them back out again is possible, maybe complaining when a computer can create people is just silly.

My biggest disappointment was in the limited amount of screentime that is given to the character of Tron. He's the biggest badass on the grid, but like Darth Maul in Phantom Menace, he's horribly underused.

Michael Sheen is one of the only actors to make an impact as the flamboyant program, Zeus. He brings some color to his scenes and briefly livens up the story.

Although I think you take the hippy nonsense too seriously Eric, I agree with you that this is some fantastic eye candy, but sadly very little else. It's one of those movies that if you don't see it on the big screen, there's no reason to see it at all. Any impact that it does make will be lost.