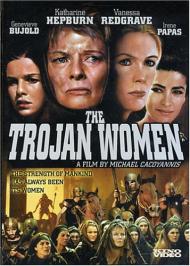 Irene Papas as Helen in The Trojan Women

The Trojan Women was written sometime around 400 BC by Greek playwright Euripides.  This English translation by Edith Hamilton was originally used on Broadway in 1938.  This film adaptation is a bit staged and the dialogue is often long and dramatic but also quite memorable.  The Trojan Women requires a bit of patience from the audience as you must listen closely and excuse the over acting so required in a Greek tragedy.

After a decade long siege, Troy has fallen to the Greeks and every male citizen has been killed. The gold and riches of the city has been confiscated.  The children have been taken away.  All that remains of the ruined city are the female population.  This includes queen Hecuba, mother of Hector and Paris.  With her is her daughter Cassandra, whose sanity has taken a vacation.

Katharine Hepburn as Hecuba carries the film through all three acts upon her very capable shoulders.  Her Hecuba is very reminiscent of Eleanor of Aquitaine from The Lion in Winter (1968).  Both were desperate royal women fighting for survival.

In the first act we learn that lots were drawn and all the women are to be taken back to Greece for whatever purpose their new master may dictate.  Hecuba is to become a slave to the Greek king.  Cassandra is to be taken away and wed to a Greek, "If God still lives, my marriage will be bloodier than Helen's."  Cassandra states.  Genevieve Bujold is good as the insane, yet wise Cassandra.  "This truth stands firm... the wise will fly from war, but if war comes, to die well is to win the victor's crown."

The second act sees the arrival of Andromache, widow of Hector.   She arrives under Greek guard with her son.   Vanessa Redgrave is astonishing as Andromache.  No sooner does she arrive than she is told that her son is to be killed and she become a member of the Spartan king's harem. Redgrave lets out a wail that only a woman in her situation could produce.

Lastly we meet the woman who started it all, Helen, played by Irene Papas.  Her first appearance is quite memorable. When a soldier tries to bring the parched women water, they mob him and the water is taken away.  We then see Helen under the watch of a guard, whom she asks for water.  He slides her a pan full. She then strips and bathes in it in full view of the outraged women.

Papas has the smallest of screen time but her scene with Hepburn is the movie's best.  She defends herself by blaming Paris, Hecuba and even Aphrodite.  "Who began these evils?  She, the day she gave birth to Paris."  She tries to get pity from the women and guards.  She even cries on a guard's shoulder cursing her own beauty.   Hecuba is however, having none of that.  "The Gods will fight on my side while I show her to be the liar she is."  Hecuba says to the women before starting in on Helen, "Never make gods out of fools to whitewash your own evil.  My son was beautiful, exceedingly.  You saw him.  Your own desire was enough, no need for any Goddess."

The Trojan Women is loaded with great performances and dialogue.  When some women try to comfort Hecuba, she says. "Let me be. Kindness unwanted is unkindness."   The Academy ignored this limited release film.  It was not a box office hit.  Many claim it to be an anti-war film, being that it came out during the Vietnam war.   As with the German made A Woman in Berlin (2008), The Trojan Women demonstrates that while the men die in battle, it is the women who endure defeat. 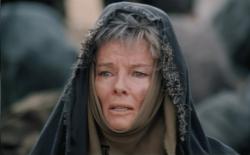 Katharine Hepburn as Hecuba in The Trojan Women.

As Eric wrote, there is nothing subtle about a Greek tragedy. The emotions are all necessarily larger than life and the actors must be able to pull off a lot of showy moaning and groaning with an occasional lung bursting yell. The dialogue is exceedingly melodramatic, filled with symbolism and grandiose phrasing. The Trojan Women is filled with these trappings as befits a play written nearly two and a half millennia ago.

Katharine Hepburn had the most regal cheekbones in the history of the movies (see photo). They allowed her beautifully chiseled face to age more gracefully than any other movie stars. Add in her incredible presence and instantly recognizable speaking voice and it's no mystery how she remained a viable leading lady well into her seventies. In Hecuba she had one of her juiciest roles and she doesn't disappoint. Whether ferociously growling out lines of defiance or whispering words of tragedy with tears filling her piercing blue eyes, she is never anything less than mesmerizing.

Vanessa Redgrave was probably the only woman from her generation that could not only play a convincing Andromache but actually hold her own against the great Kate Hepburn. As Eric said she is nothing short of astounding in the part. There is one scene where they are standing next to each other while alternating speaking lines. It is a brilliant example of two great talents bringing out the best in each other.

The rest of the cast is fine but they're all overshadowed by the towering performances of these two women.

The Trojan Women was shot on location in Spain. It features some nice cinematography even if the director does resort to a few early 1970s editing gimmicks such as quick zooms and rapidly repeated close-ups that close in tighter with each cut. For the most part though the play is allowed to unfold before the cameras without too much unnecessary interference. In short it's a memorable screen adaptation of a timeless piece of theater dealing with the tragic aftermath of battle. 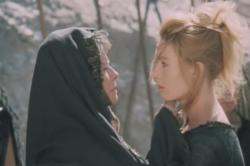 Katharine Hepburn and Vanessa Redgrave in The Trojan Women.

A movie adaptation of a play written over 2,300 years previously is a pretty amazing thing. They say art brings its own form of immortality and certainly the author, Euripides, would probably be amazed and impressed to know that his work was still being performed millenniums after he wrote it. As Eric mentioned, the script is based on the English translation from 1938. The biggest change from the original is that the Gods have been removed from the story. The original play opens with a discussion between Athena and Poseidon discussing ways of punishing the Greek armies. Apart from that change, the film remains fairly faithful to the original.

This clinging to the original play provides some of the film's strongest and weakest points. There are some great lines of dialogue, but the structure is weak. The style of storytelling has evolved in modern times and the use of a Greek chorus, combined with the 1970's style of filming that Patrick mentioned, makes the film seem doubly dated.

What the movie has going for it are the things my brothers mentioned. Namely the performances and strong dialogue. Hepburn is one of the greatest actresses of all time and she delivers another strong performance here. The regal bearing of a queen seemed to be her natural state of being and so playing one comes easily to her, even dressed in black rags with the rest of the Trojan women like a murder of crows. Hepburn possessed the rare ability to be emotional without ever seeming weak as a result.

The younger actresses are also quite good. Bujold has one of the showier roles playing Cassandra, the seer cursed by the gods to never be believed. Her madness is over the top but fits the mold of the Greek Tragedy. Redgrave is excellent as Andromache. I agree with Patrick that her scenes with Hepburn are some of the film's strongest. Papas is good as Helen and the character of Helen is an interesting one. She's cast as the villain, which seems a bit unfair and is the strongest evidence that the original script was written by a man. Helen may have been unfaithful, but it's her husband and lover who waged war for 10 years. My other problem with Helen is that while Papas looks more like the real Helen would have looked, Redgrave is far more beautiful. When I first saw her appear, I assumed she was playing Helen, since despite the geography and nationality, Helen is often depicted as blonde.

Although this movie is faithful to the play, I would have enjoyed a more adapted version of the film that took more liberties with the story and script. I know to some that is like saying, I'd enjoy Hamlet if only it didn't have all that Iambic pentameter, I still can't deny it. The story of the Trojan war has always fascinated me, as do these strong female characters. I'd just like to see them in a more modern and straightforward narrative form. Of course, it's doubtful that no matter how good such a version could be that it would ever be able to gather such a strong cast of actresses together again. 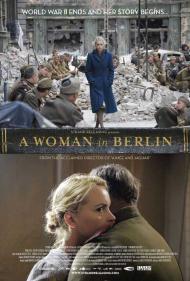