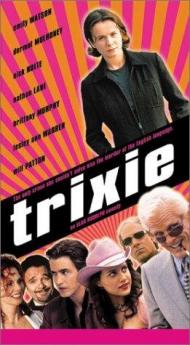 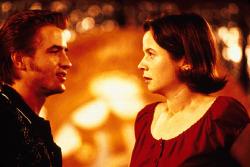 Trixie is a movie that almost works on many levels, but never completely succeeds on any of them. Emily Watson is the title character, a befuddled novice sleuth, with a penchant for butchering the English language. She says things like 'You smoke like a fish' or 'What do ya think, I've got an ace up my hole?' This gets progressively less clever and more annoying as the movie goes along until you can see them coming a mile away.

I did laugh a few times early on and it's true that I did not guess who the killer was. This was more from a lack of interest, however, and not because of brilliant editing. This movie should have been twenty minutes shorter with a much more cohesive story line. 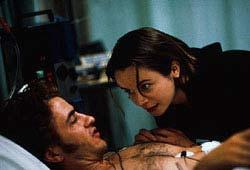 Patrick is dead on when he wrote that this movie could use a more cohesive storyline. It jumps around an awful lot. Quite often a 'whodunnit' will introduce several characters and bounce around a bit to confuse the audience into not knowing who did it. I didn't feel confused, just annoyed.

He also found Trixie to be irritating. I found her mixed up clichés to be funny. 'I'm caught between a rock and the deep blue sea.' The movie never makes it clear if she's retarded or just dumb. She is the love child of V. I. Warshowsky and Forrest Gump.

This movie's sense of humor is a bit off. If I had been drunk when I watched it I probably would have enjoyed it more. The scene with Nick Nolte getting a hand job under the table was more odd than funny.

Leslie Ann Warren is playing the same character that she did in Victor/Victoria. But that's ok. Stick with what you do best baby.

Emily Watson does a great job of acting here. She deserved a nomination at least. Its a much better and more demanding role than Julia Roberts's in Erin Brocovich. 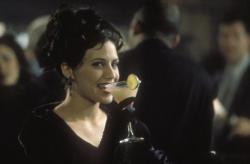 Trixie's malapropisms are amusing at first, but like Patrick I eventually found them annoying. They're funny in small doses, but by the movie's end nearly every word out of her mouth is a mangled cliche. She's supposed to be quirky--as is everyone else in this movie--but instead she just comes across as stupid.

Watson gives the part her all and it's to her credit that despite the poor script, she still manages to come across as sweet and endearing. She also maintains her American accent quite well. With a toned down script, this could have been a great part for her.

The supporting cast is notable for the famous faces, but none of them bring all that much to table. I'm guessing we have producer Robert Altman to thank for the big-ish names.

Nathan Lane does some halfway decent impressions as the washed up comic, but it feels like he's restraining himself by playing it so straight (pun intended). Nolte looks the part of the silver-maned politician and he delivers about as solid a performance as you'd expect, but he's really just playing a cliched corrupt congressman. It's kind of sad seeing a young, vivacious and very much alive Brittany Murphy. She brings a sense of fun to the proceedings, as does Leslie Anne Warren, but both of their parts are very small.

Dermot Mulroney's character needed further definition. He should have been a charming rogue, but instead is just odd and offputting. Three different women in the movie want him and the reason isn't very clear. In real life he's a fairly good looking guy, but the hair and sideburns that he wears in this movie don't do him any favors.

Like my brothers I blame the script for the movie's problems. Director Alan Rudolph also wrote the movie, but he would have helped himself if he hadn't pulled double duty. I can kind of, sort of see where he was trying to go with the quirkiness, but it would have taken a much more talented writer to get him there. The idea's not bad and the cast is certainly good, but the end result is a missed opportunity.