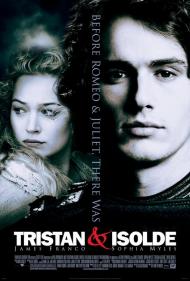 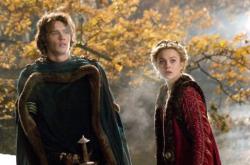 James Franco and Sophia Myles in Tristan and Isolde.

Tristan is British, and through ridiculous means, ends up near death on the shore of Ireland where he is found and tended to by Isolde. He gets better. They have sex. The movie never gives a reason why they fall in love. It is supposed to be romantic, but the truth is that she is upset with her dad for promising her to a soldier she does not care for, and taking care of Tristan gives her something to do. Why does he fall for her? I just told you. She nurses him back to health and takes his virginity. What's not to get?

Based on those romantic notions, the movie expands to include the entire destiny of the British Isles. The Irish King offers his daughter's hand in marriage to the British Lord who can win a tournament of his making. He intends to fix the games so the Lord of his choice can win. Tristan however, enters the competition and wins. He has no idea that the woman whom he fell in love with is the princess.

He was fighting for his Lord and thus Isolde must marry him and not Tristan. They start having an affair after she gets married. Their relationship could potentially undermine the progress of a nation as the King's enemies intend to use their affair to take him down.

There is lots of battles and fighting. The action is all well and fun. It helps distract from the complete and utter lack of romance. Yes, this is a love story based on a legendary love affair but it generates very little heat. There are no nude scenes or passionate encounters. There is never any reason, other than convenience, given for their relationship to be initiated so why do I care to root for them to stay together.