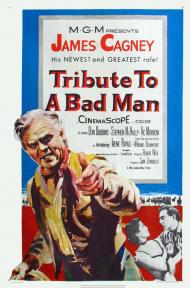 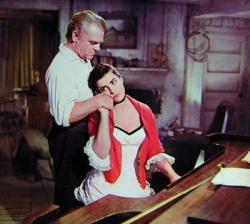 James Cagney in Tribute to a Bad Man.

James Cagney is about as urban a star as you can get. He nearly always played a guy from the mean streets of New York or Chicago. It's no surprise then that in a career of 63 movies he made only 3 westerns. Tribute to a Bad Man is the last one he made. It was released in 1956 and is beautifully shot in color and Cinemascope. Good use was made of the panoramic Wyoming wilderness by director Robert Wise. He would go on to helm the equally cinematically gorgeous Sound of Music nearly a decade later.

Cagney plays Jeremy Rodock, a wealthy horse rancher in the Wyoming territories in the 1870's. Rodock is notorious for taking the law into his own hands by hanging horse thieves without benefit of a trial. The movie begins with the arrival of a young easterner to the western wilderness. He does a voice-over narration that sets up the scene and introduces Cagney's character, whom he happens upon in the middle of a shoot-out with a couple of would-be horse thieves.

The script is pretty run of the mill. There is a woman (Irene Papas) and a love triangle of sorts and a fair amount of horse thievery and the consequences thereof. Although Rodock is the titular bad man he is not the heavy of the movie. The character of McNulty fills this bill. His comeuppance scene is the best part of the movie. After he and 2 other men are caught cutting the hooves off of mares they stole from Rodock (this is to keep the mares from roaming and will enable them to raise the foals without the Rodock brand on them), Rodock takes their boots and makes them walk to the nearest fort which is only about 200 miles distant.

Cagney was 56 with a paunch, but he still had his trademark vitality and he still never loses a fistfight. This mostly forgotten movie is worth a watch. Cagney gives a first rate performance and for once he seems at home in the old west. The ending is heartwarming without being schmaltzy. It left me with a smile on my face.