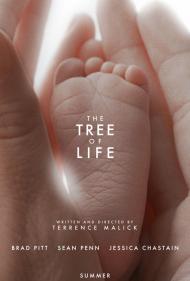 Jessica Chastain and Brad Pitt in The Tree of Life.

The Tree of Life has been dividing audiences since it won the Palme d'Or award at Cannes. Some critics have praised it as a beautifully filmed movie that explores the meaning of life and the existence of God and man's place in the universe. Others have called it a long, incredibly boring, self-indulgent chore to sit through, whose greatest asset is that some of the scenes in it look as though they'd make pretty cool screensavers. Okay, I added that last one myself because as you can see by the number of stars I gave it, I'm on the side of those who hated it.

On the surface the plot of this movie is simple. We see Jack as a grown man (played by  Sean Penn in about 10 minutes of screentime) still seemingly depressed over the death of his brother decades ago. Then we see Jack as a boy in Texas in the 1950s where he lived with his two brothers, his stern father who wants him to toughen up, and his mother who seems to indulge him at almost all times. That's it for actual plot.

What the movie is trying to be about is some kind of comparison between living by grace or by nature. To live by our selfish desires or try to be more than that. The mother, played by Jessica Chastain lays this out pretty clearly in one of the first voiceovers that are scattered throughout the film as different characters whisper prayers to god.

So how does writer/director Malick go about showing us that theme? By going back to the beginning of the universe of course and spending 30 minutes or so showing Earth develop from its creation and up through some CGI dinosaurs. During that time there's all kinds of pretty visuals--the ones that would make the nice screensavers--and some Phillip Glass type music playing over them. The end of the film contains some other elaborate imagery, but by then I was so bored I was unable to appreciate them.

At two hours and twenty minutes there's plenty that could have been edited, even beyond the history of the planet scenes. There are way too many scenes of Jack and his brothers as boys being boys. Honestly the movie felt twice as long as it actually was.

If someone put a gun to my head and demanded that I say something nice about this movie, I would have to say that Brad Pitt gives a nice performance as the father. Malick employs the unreliable narrator in the form of Jack so we are seeing everything, including his parents, through his boyhood memories. This means that we're probably not seeing his father as he really was, but thanks to Pitt's performance we can see the real him. This also causes some of the scenes to feel like a dream. Something that is particularly noticable in the scene where Jack's mother, whom he idealizes, levitates in the front yard and does some sort of spirtual dance movement in mid-air.

Even Sean Penn seems to agree with the haters. In an interview with French Magazine Le Figaro, he said, "Frankly, I’m still trying to figure out what I’m doing there! Terry himself never managed to explain it to me clearly." He also added, “A clearer and more conventional narrative would have helped the film without, in my opinion, lessening its beauty and impact.” I could not agree more.

People can tell me that I just didn't understand this movie if they want to. Some people, from what I've read online after watching it, love it and have dedicated long hours to analyzing it. Here's my problem. I was so fucking bored while watching it that the very thought of spending another second even thinking about it seems to me a wasted second that I will never get back, much like the 13,200 seconds I wasted watching this movie. 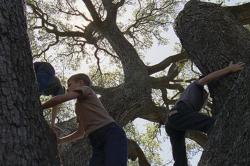 Childhood innocence as depicted in Terrence Malick's The Tree of Life.

I expected to dislike this movie more than I did. I was never bored watching it, although neither do I think it a masterpiece of filmmaking. It tells a much more cohesive story than I was expecting, given the reviews I had read before watching The Tree of Life. The scenes of the universe being created are a cross between those abstract shots in Kubrick’s 2001: A Space Odyssey and something out of a National Geographic television special. Scott exaggerates the length of this sequence, it is closer to 20 minutes than 30 and I found it rather beautiful and majestic.

The parts of the movie set in a small Texas town during the late 50s or early 60s are flashes of memories Sean Penn’s grown-up Jack is remembering on an important day in his life. One theory is that he is dying and the final scenes on the beach are him entering Heaven and reuniting with dead loved ones.

Yes, the story moves at a deliberate pace and it gives you only fragments of information with which to piece Jack’s story together. It has a consistent mood throughout and Malick brilliantly captures the look and feel of flickering long-lost childhood images as seen through the prism of memory. For anyone of a certain age this movie will vividly recall halcyon days and carefree evenings spent in the pursuit of childish adventures.

The acting is quite good. Scott mentioned Pitt’s performance and I agree he is very effective as the stern but loving father. Jessica Chastain as his wife and Hunter McCracken as the young Jack both give heartfelt and spot on performances too. And all three of them have limited dialogue to work with. In fact The Tree of Life often feels like a silent movie, or more accurately, flashes of a mostly silent dream. Only Sean Penn, as the adult Jack, seems confused and unsure of his emotional state in his limited screen-time.

Although I appreciated and was moved by The Tree of Life it is too intentionally abstruse and self-reverent to be truly great. 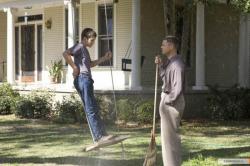 Hunter McCracken and Brad Pitt in The Tree of Life

Watching The Tree of Life was like looking through a photo album filled with my childhood memories.  Malick covers such stapled moments as long summer days packed with outdoor play.   We remember the joy a sprinkler can bring on a hot day and how exciting sparklers were on a Fourth of July evening.   The mere pleasure of climbing a tree or wondering about the mystery of the attic may invoke all kinds of familiar feelings.

Malick shows the boys get into trouble and get punished.  We see the boys come across an incident involving the police arresting some men.  They do not understand what exactly is going on but they know it is something dramatic.  We see the flashbacks through the eyes of a boy who is trying to figure life out.

Although his mother is always around, it is his relationship with his Dad that is most confusing for him.  His father dishes out the directions and discipline.  He sees contradiction in his father, not understanding what his father's goals for him are.  He felt like a disappointment to his father and that his brother was closer to him.   He witnessed his parents argue.

The Tree of Life will likely bring up some memories in all of us.  I saw our Dad's lack of affection in Jack's father.  When Jack goes to hug him, his father reacts with an uncomfortable response.  Later, when his father comes home from a disappointing day, he asks one of his sons for a hug and kiss.  Jack's father, like ours, was easy to dish out a spanking, but rare to give out a hug.

In that is the beauty of The Tree of Life.  Jack's story is not at all unique.   Every generation, except perhaps the current techno obsessed, online socializing, pornography over loaded generation, can relate to it.  We see ourselves and our family in Jack's family.  His memories are our memories.

The problem with The Tree of Life, as with all of Terrence Malick's films, is the dreadful length.  At 139 minutes, the first forty minutes could have been cut, without losing any amount of the emotional impact.  He should have started with Jack as a boy and not as a baby.  His decision to include the creation of the world may help in his theme of metaphysical dualism, but it was needlessly wasted screen time.

The Tree of Life represents the very heart of humanity.   This is a middle class family struggling with problems and finding joy in simple moments.   It shows the complicated relationships between family members and the love that binds them through good times and bad.  It asks the question of what it all means in the grand scheme of life.  If only it offered an answer.