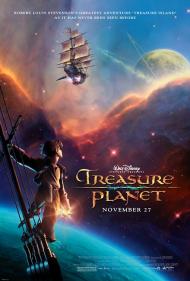 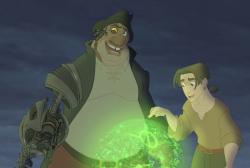 Robert Luis Stevenson's Treasure Island is a much dated adventure novel. Its appeal was that of a boy's fantasy of treasure hunting with pirates. Is this still a fantasy of any child? To update the appeal, Walt Disney's Treasure Planet sets Stevenson's story in outer space.

None to my surprise, Disney once again makes a movie about a child of a single parent. Doesn't anyone at Disney's, "family" film making studio have any plots where the parents are still actually together? Sure, I get it. The audience is supposed to feel more sympathetic for children of single parents. However, doesn't current liberal political correctness tell us otherwise?

As per the Stevenson story, Jim Hawkins gets caught up in a treasure hunt. This time they take a space ship instead of a Schooner. The crew takes over the ship and Hawkins finds himself battling the treacherous group led by Long John Silver.

David Hyde Pierce provides some decent humor in the movie. His inept Dr Deppler mixes up his words to entertaining effect. Later in the film, Martin Short's robot, Ben, does the hysterical character bit - think Robin Williams in Aladdin. He had me laughing but I kept thinking that he was doing a Williams impersonation.

The animation is as good as any Disney movie. The pace flies by well enough. It attempts to get sentimental when it has Long John Silver act as surrogate father for Hawkins. Silver and his crew are outlaws and murderers. Near the end of the movie Silver saves Hawkins' life and thus Hawkins lets Silver get away. So the moral lesson here is that it is okay to be a bad guy just as long as you occasionally do something good. Huh?

Stevenson's story is outdated. Disney should have made more dramatic changes than adding a robot and changing Silver from being a peg leg pirate to a cyborg pirate. This movie takes place in space, yet all the space ships look just like old sailing ships. The Bend Bow Inn, where Hawkins grew up, is a replica of an old English Inn. Yet it serves aliens on a distant planet? Disney tried too hard to keep the original feel and look of the story while adding the pizzazz of outer space. The effect is uninspired.

With an old plot and a mixed up setting, this movie just comes across as a bland mess. The main motive for anyone in this movie is greed. Silver supposedly helped Hawkins grow up in the process of the adventure, yet I didn't see any moral lessons other than it's okay to let your friends get away with wrong doing as long as they do something for you.