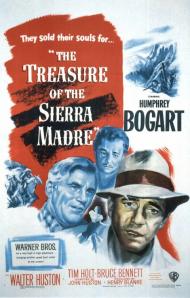 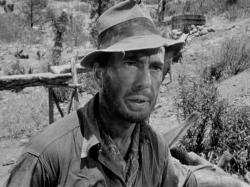 Humphrey Bogart in The Treasure of the Sierra Madre.

The Treasure of the Sierra Madre is one of those classic films you have either seen or at least have heard of if you are any kind of movie buff. Whereas it certainly offers some entertainment I am not sure why it is considered such a classic. Sure it has the 'stinkin badges' line and Bogie's character is immortalized in a Bugs Bunny cartoon. Still, me thinks it is a bit overrated.

Bogie stars as a loser named Dobbs who takes up with two other losers and goes gold digging. They strike it rich and end up battling bandits and each other. Action occurs, but the tension comes from what is implied and what may happen more than from what actually happens.

The direction and acting is occasionally poor. In one scene Dobbs shoots one of the partners. He later states out loud that he should go back and make sure the guy is dead. Who is he talking to? He is the only one on screen. With better acting and direction the scene could have played out without Dobbs having to announce his actions.

Watch this movie and you see that Bogie was butt ugly. His craggy face and homely smile could scare preschoolers. Why he didn't play more bad guys I will never know. However, despite his lack of looks, Bogie had amazing screen presence. In this film he is the only thing worth watching. Even when he has to overact. 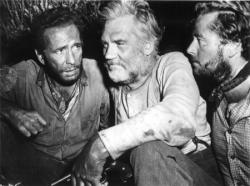 Humphrey Bogart, Walter Huston and Tim Holt in The Treasure of the Sierra Madre.

Bogie's acting in this movie is superb. Is it over-the-top compared to today's naturalistic acting? Yes. There was a time when acting was much more theatrical. There was a definite style to it. As Bette Davis once said “I want to be able to tell that someone is acting. If I want to see people behaving naturally I can go stand on any corner." The same can be said of the direction. The scene Eric mentioned, where Dobbs shoots Curtin, is very powerful as is. Either you appreciate this style or you don't, but for the record, Bogie is great in this movie and so is the direction.

This movie is all about greed. About how greed can change the heart of any man. Perhaps Eric didn't appreciate this since he wrote off the three main characters as losers. We really don't know anything about these guy's pasts, especially Dobbs'. All we know is that in 1925 Mexico the three of them meet up and go gold digging.

As good as Bogie is though it is Walter Huston as Howard, the wise old-timer, who steals the movie. His gleeful cackle, exuberant enthusiasm and nonchalance about every danger they encounter makes him one of the great supporting characters. He won the Oscar as did his son John Huston for directing this masterpiece.

Yes this movie is a classic and deservedly so. It is entertaining and intriguing. It is a man's movie and about as hardboiled as they come. There isn't a dame in sight. It is all about the honor and dishonor among men in the wild, searching for treasure while fighting the elements and shooting it out with bandits. 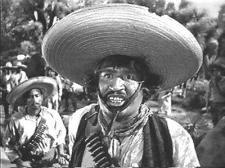 Treasure of the Sierra Madre

Patrick, I find it ironic that you seem to say that you prefer the old fashioned highly dramatic acting style that was in vogue when this movie was released, but then state that Walter Huston steals the movie, when his acting is the most naturalistic of the entire cast. Having said that though, I have to agree with you about him. He does steal the movie.

So Eric, when you saw Hamlet for the first time, did you think to yourself, "What was up with that 'To be or not to be' speech! He wasn't even talking to anyone. Ha, a GOOD writer wouldn't need an actor to talk to himself to get the point across!" Seriously though, they had clearly already established that Bogie's character was a little crazy and in an earlier scene Howard talks to him about the fact that he's been talking to himself so it's not that strange that he talks to himself in that scene.

I do agree with you though Eric that Bogie was one ugly son of a bitch. If they'd made the Lord of the Rings into a movie while he was alive he could have played Gollum without any makeup. When he stands up from the barber's chair at the beginning of the movie I almost flinched when the camera zoomed in for a closeup. As talented as he was in his day, I doubt he would ever have been offered a lead if he was trying to start his career today because of his looks.

My only real problem with this movie is that it takes a very long time to get started. The story doesn't really get going until the three of them head off into the desert to look for gold. There's all that business at the beginning of the movie when Bogie and the other guy get hired and cheated out of their money. They should have trimmed up that part to move things along faster. My other small problem is, how stupid are the bandits to not think that the bags of "sand" might not be bags of gold? They barely glance at them and then start pouring it out. And why do they pour all the bags out? Why not just dump the bags without emptying them?

You can call this movie a classic if you want to, but really, what does that label matter anyway? The only thing that matters is if you enjoy it or not. Personally I enjoyed this movie for the most part, but if every movie snob who ever lived had called it a dud, it wouldn't have changed my opinion of it one way or the other. Being called a classic is a bit over-rated in my opinion.