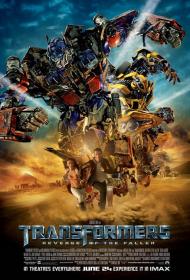 Megan Fox and Shia LaBeouf in Transformers: Revenge of the Fallen.

I have been putting off writing my review for Transformers: Revenge of the Fallen because there is very little to actually say about it. If you liked the first, you will like the sequel.

Sam is heading off to college, while the Autobots are acting as secret weapons of the U.S. Military, fighting Decepticons around the globe. The plot eventually moves toward the Decepticons and the Autobots battling over a vast weapon that was hidden on Earth thousands of years ago. Plenty of animated action pack the two and a half hour film.

Sam is still getting embarrassed by his parents. Megan Fox does another sexy bent over pose. The U.S. military gets more promotion and publicity than a years worth of recruiter commercials.

The new additions are comic relief transformers. There are a couple of jive talking autobots. "It's an ass-whoopin', it's supposed to hurt!" There is also an old Jet plane named Jetfire, "My father was a wheel! The first wheel! And do you know what he transformed into? Nothing! But he did it with honor!" My favorite character though, is Agent Simmons, who is now working at his mother's deli. "What you are about to see is top secret. Do not tell my mother."

The stars are of course the giant robots from the first movie, and their transforming abilities. They are awesome to watch on the big screen and although they are only animated, they do create some very tense fight scenes. In fact, I was very emotionally caught up in the explosive, climactic battle. If Bay does anything right it is that he plays the whole movie very seriously. You could very easily dismiss this entire film as an overblown animated juggernaut, or you could leave your cynical attitude at the door and just get lost in this fast paced spectacle. 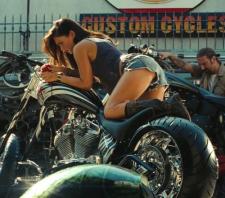 Megan Fox shows off her ass-ets.

An overblown, animated juggernaut is exactly what this movie is Eric. And I don't think that makes me a cynic for saying so. I'm a fan of big budget action movies and I've been known to check my mind at the door and thus make allowances for thin plots, under-developed characters and action instead of acting. There are just too many allowances to make with this movie.

Granted, the special effects are quite good and it definitely helps to see them on the big screen, but for a movie to be 2.5 hours long, you really need more than special effects to keep my interest. The fight scenes are impressive; particularly the climatic battle on the pyramids, but it takes far too long to get those scenes. I also have to admit that during that final battle I had a hard time keeping track of which robot was which. Several of the bad robots are dark grey and similarly built, so that I couldn't tell which was Megatron and which wasn't. And with the more colorful robots, I couldn't tell who was good or who was bad in the heat of the battle. Perhaps this isn't so surprising since most of them have no discernible personality traits to distinguish them anyway. Despite that though, the last half-hour or so is sheer popcorn munching entertainment. If only it could have come about 30 minutes earlier.

There is a lot they could have trimmed from this movie. His parents and the scenes at college should have been the first to go. (Sidenote: What the hell kind of marijuana brownies give you manic energy?) And Megatron's plan for his parents was what exactly? He goes to the trouble of kidnapping them, transporting them to Egypt and then letting them go and all for what? So that he can distract Sam for about 2 seconds without accomplishing anything?

I also have to mention one thing that bugged me. When Sam and company run out of the Smithsonian museum in Washington D.C., they emerge in a desert filled with old planes with mountains in the distance. Since when does DC have a desert or mountains? And no, I don't mean after they teleport to Egypt, I mean before, as soon as they run out the door of the museum.

Agent Simmons is good for a few laughs, I do agree. Sam's college roommate though, could have been dispensed with all together. With Agent Simmons and the two new "jive-talking" robots, you've got enough comic relief. The roommate was just annoying.

I am perfectly willing to admit that I just don't get these movies. I'm too old to have fond memories of the cartoon or really relate to Sam's character, plus I've never been a "car guy", so get no thrill at the idea of ones that transform. I don't have children to enjoy it through vicariously, either. Although, why not liking it should make me a cynic, I'm still not sure.

Since I didn't really enjoy the first Transformers movie and liked this one about the same, I guess Eric that your first paragraph is fairly accurate.

I wasn’t a fan of the original cartoon either and I am likewise not a car guy, however I enjoyed the first Transformers movie as well as this sequel. You have to accept the ludicrous concept that a race of intelligent aliens are made of metal and resemble the human invention known as the automobile. If you can’t get beyond that then don’t bother watching.

This sequel has everything the first one had only more of it. My one real complaint is the running time. Two and a half hours of mind blowing eye-candy is just too much. My eyes were actually tired by the end.

Scott I agree about the marijuana brownies. The mother’s behavior is more stupid than funny. I did like the twin robots Mudflap and Skids, “Are you scared?” “I’m scared only of your ugly face.” “I’m your twin you stupid genius!” My favorite character though was the senile old-timer Jetfire, “I've got no time to talk, I'm on a mission! I'm a mercenary doom-bringer!... What planet am I on?”

This franchise is perfect for the talents of Michael Bay. I only hope that next time they are a little less ambitious in scope. They’re not making Lawrence of Arabia after all. If they can clock the third one in under the two hour mark then count me in. 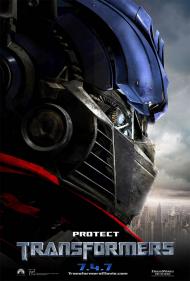 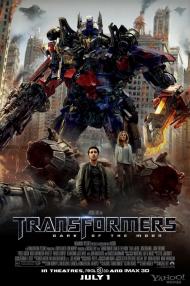 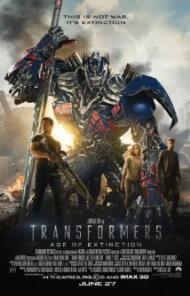