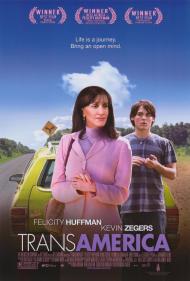 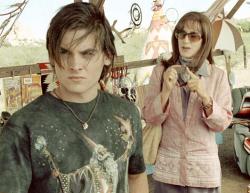 Every year at the Oscars there's that one role from a movie that barely anyone has seen but gets good buzz anyway. At this year's Oscars it seems like almost every movie and acting nomination is that way. However, in a field of limited release movies, Transamerica must be the least seen. With its yet widest release of only 126 theaters and a total box office of less than $3 million, Felicity Huffman's Best Actress nomination has to be the most obscure. Based at it is on gimmick casting and its movie of the week plot, it is also the least deserved of the bunch.

Huffman stars as Bree, formerly Stanly, a pre-operative trans-sexual who, a week before she is due to turn her penis from an outy to an inny, gets a call from someone claiming to be Stanly's son. Apparently his son is in juvenile detention for being a drug addicted prostitute in New York City.

Bree's psychologist tells her to go and deal with the son before she gets the operation and reluctantly, Bree agrees. Toby, Stanly's son, is 17 years old, but thanks to the writing seems more like he's 12. Anyone living on the streets of New York with his mental capabilities would probably be dead long before he was ever arrested.

After she bails him out of jail, Bree agrees to take Toby to California, although her real intention is to drop him off with Toby's step-father. When it turns out, for soap opera/after school special/movie of the week reasons, that Toby can't stay with his step-father, the movie quickly becomes a road trip where Bree and Toby learn to love each other, despite the fact that Toby doesn't know that Bree is his father or, at first, even that Bree has a penis. It seems to me that any male prostitute hustling on the streets of New York would learn to recognize a man dressed as a woman, but as I said, Toby is far from being the brightest bulb in the box.

Bree, thanks to the writer-director Duncan Tucker, speaks the most stilted and awkward lines of dialogue, which even given that she's trying to sound like a proper lady, makes it very obvious that she's not what she seems to be. And the voice Huffman spends the movie speaking the lines in comes across like an imitation of Bebe Neuwirth.

The casting of Huffman also seems wrong. With the premise being that the lead is a woman in a man's body, why do you hire a woman to play the body? Doesn't that make it a woman acting like a woman in a woman's body?

Despite groundbreaking subject matter (for an Oscar nominated film anyway), the movie ends in a completely conventional happy Hollywood way.

The two reasons I can think of that this movie is getting the buzz that it is getting, is that one; Felicity Huffman is hot right now thanks to Desperate Housewives, and two; because no one wants to be called a transgender-phobe by insulting this movie. Well, I've never even seen an episode of Housewives and you can call me what you want to, but this is a B-movie at best. If you want to see a good movie that deals with Transgender issues, you should see the HBO film, Normal, starring Tom Wilkinson from 2003. As for Transamerica, it should linger in obscurity.

Felicity Huffman and Kevin Zegers on the road in Transamerica.

I never watched this movie when it came out because I thought it was going to be this overly preachy melodramatic lecture on the treatment of transsexuals in America. It is anything but and you do it a disservice, Scott, by comparing it to the HBO film Normal which IS a dramatic story about one man’s journey into womanhood. Transamerica is a feel-good, road-trip comedy. Sure it has a few brief dramatic moments but the happy Hollywood ending you complained about makes perfect sense given the overall tone of the movie.

I remember all the Oscar buzz for Huffman’s performance but I think many of those raving about it probably never even watched it as it was promoted as this big dramatic role when in fact it is played mostly for laughs. The voice and florid speaking style are supposed to be funny. Bree’s line about changing her penis from an outy to an inny is a dead giveaway.

Like Mark Wahlberg in Boogie Nights, Huffman is outfitted with a prosthetic penis, which adds to the illusion of Bree being a biological male. I don’t consider this gimmick casting, however, because with a character that goes from one gender to the next over the course of a movie you have to have an actor that at some point plays the opposite sex (unless of course you find a method actor willing to undergo sexual reassignment surgery for the role).

As Scott wrote Toby is a bit of a dim bulb but he has a creative and amusing theory about The Lord of the Rings being gay. Here’s how he explains it to Bree. “There's this big, black tower, right? And it points right at this huge burning vagina thing, and it's like the symbol of ultimate evil. And then Sam and Frodo have to go to this cave and deposit their magic ring into this hot, steaming lava pit. Only at the last minute, Frodo can't perform, so Gollum bites off his finger. Gay.”

This isn’t a great movie by any means but I was entertained. I chuckled a few times, was emotionally moved a bit, and I liked and rooted for the main characters. 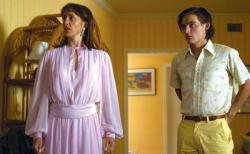 Felicity Huffman and Kevin Zegers as Bree and Toby in Transamerica

The first point I must make is about Toby. My brothers wrote that he is not very bright as if that somehow is a misplay by the writers of Kevin Zegers. As I live with two boys close to Toby’s age I can confirm that Toby is acting age appropriate. From my experiences with my sons and their friends, I find 17 year old boys to be little more than 12 year olds in adult sized bodies.

The fact that he cannot tell that Bree is actually a man can easily be explained, at least for the first quarter of the film. Young adults are notoriously self-centered. My sons and their friends have no clue that there is a world going on around them unless it directly affects them in a personal way. Toby does not see that Bree is a man because he only sees Bree as a ride and a source of money, at least at first. Once they start to get close he should have at least suspected. The movie even tries to cover this base by having Bree at one point accuse a real woman as being a poorly disguised transvestite.

I disagree with Scott about Felicity Huffman’s performance. Look at an early scene where a red eyed Bree is talking to her therapist. She is clearly frustrated and confused. It is a great performance. The fact that she is in the process of her transformation adds another layer that Huffman conveys through her awkward, yet careful movement of her own body, as if every step is calculated to be feminine. It is as if Stanely is still figuring out how to act like a woman.

The dramatic climax is a bit disturbing yet thought provoking. What is Bree to Toby? Is he still considered his father? DNA answers, “Yes.” No surgery, no matter how extreme, can truly change one's genetic sexual makeup. Bree may dress like one but he cannot truly become Toby’s mother. Thus, is transgender surgery just a very elaborate costume?

My brothers considered this to have a happy Hollywood ending as Bree and Toby come to an understanding. They truly need each other as both just want to be accepted and respected, and they find that with each other.Toby is, however, a constant reminder that no matter what has been removed, Bree will forever be “Bree, who used to be Stanley.” That is not only a happy ending but also a new understanding for Bree.