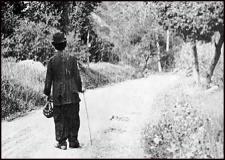 One of the most iconic endings in movie history.

The movie begins with the familiar little tramp walking down a country lane. After being nearly hit by two cars the little tramp stops for lunch by a tree and sets about eating his meager fare. A farmer’s daughter, on an errand, comes racing by the little tramp with a villainous thief in hot pursuit. He turns out to have two nearby sidekicks.

With a combination false bravado and sleight of hand, the tramp makes like Bugs Bunny (only before there was a Bugs Bunny) and, one by one, chases them off. Then, true to form, the little tramp immediately embarrasses himself in front of the farmer’s daughter by accidentally sitting in the smoldering remains of the three villainous thieves' campfire. He then runs away with his behind smoking and finds some water to sit in. Cue steam rising from the water. I wonder if this was the first time that gag was ever used in a movie?

Anyway, as you probably guessed, the little tramp winds up working for the farmer, falling in love with the girl and saving her from the same three dastardly thieves when they attempt a burglary. The tramp gets injured in the process and is tenderly nursed by the girl. His love grows stronger. But then cruel fate steps in with the arrival of the girl's handsome betrothed. The little tramp sadly leaves the girl a note and then departs alone. Of all the Charlie Chaplin two-reelers I've seen, this one has the most heart. In that respect it is the most like his longer films.

Nearly everything about this short is archetypal. It’s THE classic story about the farmer’s daughter told in an iconic silent movie style. And with this movie Chaplin fully realized his little tramp character. The finishing touch being the final shot and fade-out. This was the very first time Charlie shrugs, puts his hobo stick over his shoulder and shuffles off into the sunset, on to the next adventure and straight into Hollywood legend.

To be objective a couple of the gags go on too long, like the one with the pitchfork, the bag of feed and the barn ladder. But some movies should be above criticism. I mean how could I not give it four stars? 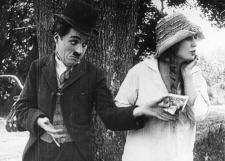 Wisely, Chaplin embued the Tramp with a lot of heart.

I agree Patrick, you have to give this movie 4 stars. The jokes are all slapstick and yeah, he does wield the pitchfork a bit much, but Chaplin's charm is there and the Tramp is such a likable little fellow that it more than makes up for any of the movie's weak points.

It's funny that you mention Bugs Bunny, because that is exactly what I thought while watching this short. In fact, Bugs Bunny is like a combination of Chaplin and Groucho Marx. The biggest difference between Bugs and the Tramp of course though is that Bugs was always in control, while the Tramp mainly bumbles his way through things.

Wisely Chaplin bestowed his most famous creation with heart and pathos. The tramp is a clown all through the movie, but what really makes him memorable is the little bit of sadness at the end when he realizes that he has to leave the girl he's fallen for. And the dignity when he turns up his nose at the offer of money from her betrothed. But then, lest this happy little comedy end on a down note, the Tramp is shown skipping off at the last minute as if happy to be back on the road where he belongs.

You can't be objective about something as historical and iconic as this. 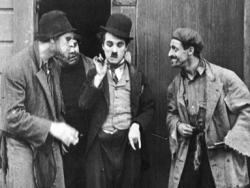 Charlie Chaplin in The Tramp

My brothers alluded to it, but I will elaborate.  Charlie Chaplin uses the butt as the butt of many jokes.   A passing car knocks him down leaving him lying backwards with his butt in the air.  Chaplin stands up and wipes the dust off him with a tiny brush that you might see an umpire use on home plate.  Chaplin bends over, reaches between his legs and sweeps his butt clean.  He brushes his pants off and then pulls the front of his pants out a bit and looks down at his crotch and then directly at the camera.  Is he checking to see if it is still there or free of dust?

My brothers mentioned the pitchfork in the butt joke.  I counted fourteen times that Chaplin forks another farm hand in the butt.  Patrick mentioned his butt catching on fire and sitting his butt in water.  When climbing into a loft, Chaplin grabs his butt and lifts himself the last step up.  Chaplin later hits a guy in the butt with a piece of wood and then kicks him there right afterwards.  Several people get kicked in the butt, including Chaplin.  Several people also get grabbed by the seat of their pants.

I am not sure if Chaplin was into butts or it was just an easy joke.  Either way, he certainly made use of it.  One thing to note is that the lone girl in the film is never kicked or grabbed in the butt.

My brothers mentioned how iconic this film is and I have to agree.  If you  were to introduce Chaplin to someone, this is the film I would recommend.  It is less than a half hour long and shows how well he mixed comedy with sadness.   Such as in life nothing is one dimensional.  Although he ends up saving the girl, Chaplin's first inclination was to also steal the girl's money, just as the other tramps had done.  After all, the Tramp is only a human, with a butt fetish.