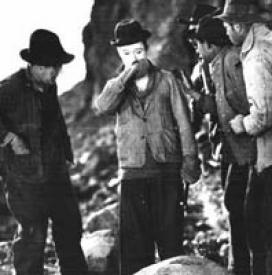 Harry Langdon is often called the forgotten comic. He is the fourth great silent movie funnyman after Chaplin, Keaton and Lloyd. He was known for his pale baby-face and quizzical expression.

Tramp, Tramp, Tramp tells the story of a poor shoemaker's son who must go out into the world and raise enough money to keep his father's shop in business. He ironically winds up in a cross-country walking race sponsored by the new chain shoe-store that is responsible for his father's financial problems in the first place. He, of course, falls in love with the daughter (a very young Joan Crawford) of the owner of the big company after seeing her picture on billboards. In one funny bit he plasters huge photographs of the girl all over his hotel room.

Needless to say he encounters many adventures during the race, including doing time on a chain gang, dangling over the side of a cliff and surviving a tornado. In the end though he wins the prize and gets the girl.

The story is credited to, among others, a young screenwriter named Frank Capra. This movie is not so great but it is worth watching for Harry Langdon's charming performance and a look at the future Mommy Dearest in her flapper days. 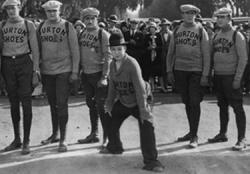 The 1920s saw a new batch of film stars. Some of these new Hollywood hopefuls would become extremely famous during the second half of the silent film era. Clara Bow and Harry Langdon were two such notables, but neither would have a successful career following the advent of sound. Joan Crawford did and was even referred to as "the most durable dame of them all."

Langdon was, as Patrick wrote, the fourth silent comedian, but he never received the same amount of credit as Chaplin, Keaton and Lloyd. In my opinion he did not deserve it. His character here is annoyingly childlike. As Patrick mentioned, Langdon was 40 but playing a very young man. His face is plastered with makeup, giving him almost a drag queen look.

The stunt on the cliff started out well with him hanging by his belt but the final execution of it all was dissapointing. The chain gang part is mildly amusing. The best part being the cyclone scene at the end with the clueless Langdon not having a clue about what to do. In fact, he seems so dense the entire film that I never felt any real sympathy for him.

The film ends with Langdon hamming it up in a scene that is more embarrassing than funny. This film has a few cute moments but the romantic angle and, most importantly, the jokes never really connect. Langdon seems to be trying but I never really cared if Harry won the race or not. 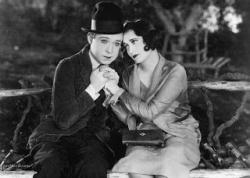 I agree with Eric. Harry Langdon's childlike character is limited and sometimes annoying. It's also occasionally creepy. I mean, here's a 40 something year old man with the intellect of a little boy who is attracted to a grown woman. The only thing creepier than that is the fact that somehow Joan Crawford finds him attractive. The closest modern equivalent to his persona is PeeWee Herman and I'm not sure I want to meet the woman who finds him attractive.

Another problem with this film is that Langdon tends to milk his jokes far beyond their breaking point. When he first meets Joan Crawford's character for example, he reacts in a coy and childish manner, which is more creepy than funny to begin with, but then his reactions go on and on. This is the case with even the jokes that are actually funny.

Langdon also comes across as derivative of Chaplin, especially in the scenes during the cyclone which reminded me of the scenes of Chaplin inside the cabin in Gold Rush. This isn't just something that's obvious with hindsight, but was also pointed out by film critics of the day. The New York Times film critic, Mordaunt Hall, wrote on May 24th, 1926 that "While viewing Harry Langdon in his first feature-length production, Tramp, Tramp, Tramp, one is impelled to feel a greater respect for Charlie Chaplin's genius than ever, for although Mr. Langdon undoubtedly has a keen sense of the ridiculous there are in this new film several episodes that are strongly reminiscent of The Gold Rush and which suffer by comparison with the Chaplin comedy."

One interesting historical fact about the film's story is that the walking race that plays such a major part of the plot is based upon actual walking races that were quite popular during the 1920s. Although it's doubtful that anyone participating in such a race encountered the difficulties that Langdon's character does in this film.

Langdon is known as the forgotten comic and nothing in this film shows evidence that that nickname will ever go away.