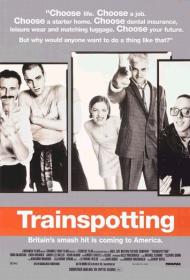 Trainspotting is the movie that put both Ewan McGregor and Danny Boyle on the movie map. This was their second film together, but it was the one that got them both noticed internationally. Filmed in a unique manner that involves narration as well as creative drug induced visions. This movie can makes me laugh and feel repulsed, and often at the same time.

Renton is a heroin addict. He lives with his parents but hangs around a drug house with his fellow Scottish friends. He makes a couple of attempts to get off drugs. After the first successful time he rediscovers sex. “Heroin had robbed Renton of his sex drive, but now it returned with a vengeance. And as the impotence of those days faded into memory, grim desperation took hold of his sex-crazed mind. His post-junk libido, fueled by alcohol and amphetamine, taunted him remorselessly with his own unsatisfied desire.” He hooks up with a girl, but regrets it in the morning.

Sickboy is a James Bond/Sean Connery afficionado. He likes to dress in a suit jacket and tie. “Ursula Andress, the quintessential Bond girl. That's what everyone says. The embodiment of his superiority over us. Beautiful, exotic, highly sexual and totally unavailable to anyone apart from him. Shite. Let's face it. She can shag one punter from Edinburgh, she'd shag the whole lot of us.”

Although it has some very funny, and some creative parts, such as the toilet scene, Trainspotting also contains some drama. Renton inadvertently turns one of his friends into an addict. People get tested for AIDS. An innnocent bystander dies.

Trainspotting is an anti-drug movie but it is not heavy handed. Boyle balances humor and drama very well, and keeps you interested even when what is on the screen is hard to look at. Although the accents sometimes make it hard to keep up with what is being said, the dialogue is witty and clever. Trainspotting is a genuine, brilliant piece of film making.