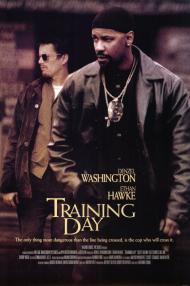 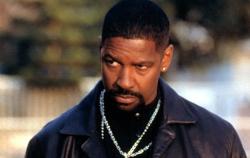 Ethan Hawke and Denzel Washington star in this violent yet intelligent cop thriller. Hawke is a rookie on his first day in the narcotics squad of the LAPD; Washington is the cop doing the training. And he doesn't like to go by the book; in fact within Hawke's first hour on the job he is both drunk and stoned out of his mind on PCP at his superior's insistence. Not wanting to appear scared and with dreams of making detective someday, Hawke is game for just about anything, managing a feeble protest here or there but basically going along for the ride. Until things go too far...

This is one of those movies that continues to build in intensity right up to the big finish. It shows the corruption within the system but doesn't make it appear as if all cops are this way. However as an indictment against the system it is only partially successful. The superhero ending takes away from the level of realism. The audience realizes suddenly that they are in Hollywood Land and not the real world after all. As entertainment they probably made the right choice however because the action is riveting.

Both of the leads are very good but Denzel is a particular standout as the heavy. A role which he has seldom, if ever, played before. Here he is smug, charming and absolutely cock-sure as the street smart veteran. Was he ever as innocent and idealistic as the young rookie, as he claims, corrupted by the system around him or was he simply a bad apple all along? Either way his cop is ultimately a sympathetic character. 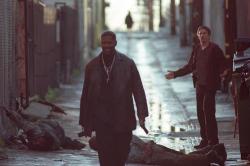 Training Day is a fast paced in your face film. It shows corruption and violence as norm. If only the ending could have matched the rest of the movie.

Denzel Washington stars as a cop who got way in over his head and drags a rookie, Ethan Hawke, along as he attempts to stay above water. The entire movie takes place in one day. We learn that some previous events occurred involving the Russian mob. Washington's character owes some money and will do whatever he needs to do to get it. Hawke is the rookie with his ideals still in order and much to the frustration of Washington, refuses to sacrifice them. Even when offered a large amount of money.

The movie's ending is where the film fails. In a scene involving a preposterous coincidence, the rookie's life is spared. He then goes after the rogue cop in a Hollywood shoot up scene that ends with the bad cops neighbor's betraying him for some unexplained reason.

Where this film succeeds greatly is in the acting. Washington won for Best Actor, and Hawke was nominated for Best Supporting Actor. I don't know why because they had about the same screen time. Both actors deserved the gold. Washington doing a bad guy with self assured arrogance, yet he occasionally lets a vulnerable side in. Such as the scene with his son.

Hawke plays the pivotal character. He is the new guy and understands he must do things to fit in. You can see Hawke's character wrestle with his own ethics each time he is asked, or commanded to do something wrong.

Some great acting. But the ending could have definitely used some help. 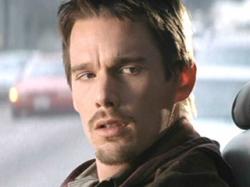 This was one of those movies that slipped past me when it was released in the theater. Denzel's performance generated good buzz and of course he eventually went on to earn the Best Actor Oscar for this role, but still somehow I missed it. It's always interesting to watch a movie for the first time long after its marketing campaign has ended to see how it stands the test of time. In the case of Training Day, while the movie clearly suffers from some weaknesses, Denzel's performance holds up very well and demonstrates that his Oscar was well deserved.

The weakness of this movie is, as my brothers said, the ending. As Eric pointed out, the unbelievable coincidence that saves Hawke's life near the climax is just stretching the realms of reality too far. I suppose the message of this scene is that all good deeds are rewarded, but if Ethan could have escaped the situation in almost any other way, the movie would have been the better for it. After this scene I was never quite 'in' the movie in the same way again. The final confrontation between Hawke and Washington becomes pretty standard action stuff with both characters surviving beatings, blows, and falls that would kill or at least knock unconcious most ordinary people. I am though, a bit baffled by Eric's statement that Denzel's neighbors betray him for an unexplained reason. Quite clearly from the first time they enter the neighborhood near the beginning of the film it is obvious Denzel is disliked and only tolerated because they are scared of him and what he represents.

What carries this movie far above such petty nitpicking is Denzel Washington's performance. From the moment his character appears on screen you have no idea what he will do next. It's an overused cliche to say that someone's performance was electric or commanding, but Denzel's was both of those in this movie. When he's in a scene, which is most of the movie, your eyes are on him. He is clearly the villain, but such a powerful and charismatic villain that he nearly seduces Hawke's innocent character over to the Dark Side simply by the force of his personality. The movie is worth watching just to see Denzel in action here.

Clearly 2 years or 20 years or 50 years after this movie's release, while the subject matter may become dated, Denzel's performance will stand the test of time.