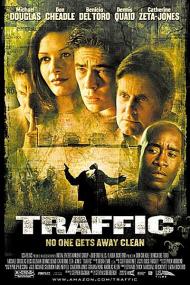 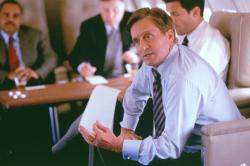 This is a great movie and should walk away with the Best Picture award at the upcoming Academy Awards. It is a multi-layered look at the billion-dollar drug industry, shown from almost every conceivable angle, from the Drug Czar to all levels of dealers and the officers who fight against them.

Steven Soderbergh masterfully intertwines the stories of a dozen or so main characters, each one connected to the trafficking, policing or using of illicit drugs, in both the United States and Mexico. The all-star cast; headed by Michael Douglas -in his best role in years- is very good, particularly Benicio Del Toro in a brilliant turn as south of the border cop Javier Rodriguez Erika Christensen is also quite moving as Drug Czar Robert Wakefield's (Douglas) drug addicted daughter who, through her ordeal, changes her conservative father's views towards how to carry out his powerful position. Don Cheadle, Dennis Quad, Catherine Zeta-Jones and Amy Irving round out this stellar cast and as if that wasn't enough the director enlists several big name cameo's including Benjamin Bratt, Albert Finney, Salma Hayek, James Brolin and several real life senators such as Barbara Boxer and Orrin Hatch.

The plot is fairly involved but easy to follow and the pacing and editing flow together nicely. The style of Traffic is reminiscent of Robert Altman in his prime and Soderbergh will probably win for directing also. This is definitely the American Beauty of this year's race. 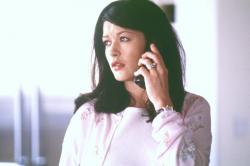 As Patrick said, this is a multi-layered look at the drug industry. We are presented with the Mexican police officer caught between rival drug cartels, the American drug lord in LA, the drug middleman, a street pusher, the users, and the head of the anti-drug campaign in America. To me, that is about 3 layers too many. It didn't surprise me to find out that this movie was originally a British mini-series. It really needs the length of a mini-series to properly handle all the stories that it's trying to tell.

Don't get me wrong, I had no trouble following all the story lines. The editing is superb. And at the beginning of the movie, I enjoyed putting the story together, figuring out where each of the characters fit in to the chain. However, not too long into the story, I realized that I really only cared for about two or three of the characters and their part of the movie. This left me waiting through stretches of the movie about which I cared nothing at all.

The parts I did enjoy, I enjoyed a great deal. I'd have been interested in watching a whole movie around Benicio Del Toro's character as the Mexican police officer trying to do his best in an extremely corrupt system. The parts I didn't enjoy, I really didn't enjoy. What anyone sees in Michael Douglas, in this or any movie, is beyond me! And as for his daughter, while Erika Christensen does a decent job of acting in the role, I felt no sympathy or concern for her at all. The poor, little, neglected, rich girl who is angry at something, she just doesn't know what. I didn't buy it and her family's story was my least favorite part of the entire movie.

What this movie does and does well, and what might earn Soderbergh the Director's Oscar, is present all the different stories in a coherent, well edited, way. And each of the segments has their own distinct visual style. The Mexican storyline is gritty and brown. The Michael Douglas storyline is shot with a soothing blue filter as it begins and is gradually reduced as he comes face to face with his daughter's problems.

Parts of this movie I would actually give 4 stars to, but the parts I hated, such as Michael Douglas's story arc, I would only give 1 star. Which is why I'm averaging this movie out at just 2 stars. On a technical basis, this is a brilliant film. As entertainment, it falls far short. This is not a movie I will ever want to watch again. 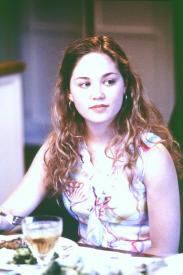 Traffic is a brutally honest look at the world of drugs. It shows it from several different angles and each one is very well done. From the drug manufactures down to the users. It covers all the bases.

My particular favorite parts were the segments with Michael Douglas and the story line about Catherine Zeta Jones. Catherine plays the innocent, pregnant, wife of a major drug importer/dealer. She lives in a life of luxury and pampering. All supported by her husband's illegal business that she claims to know nothing about. By the end of the movie she has become the dealer herself and a murderer. I did not care for Catherine's comedic performance in America's Sweethearts, but here in a dramatic piece she is very good.

Michael Douglas plays a government agent who at the start of the movie proudly stands firm and erect as a newly appointed anti-drug official. However, fairly early on he learns that there is little he can do to stop the flow of drugs. Witness the scene in the airplane when he asks for suggestions and no one responds. He does not actually realize just how impotent he is until he discovers that his very own daughter is a crack whore. As a father I found that scene very frustrating to watch.

I found the movie a bit depressing as it seems to say that fighting drugs is a losing battle. Although the film does end on the note that the battle will continue, I wished for a sunnier conclusion to a rather dark movie.