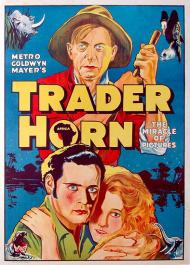 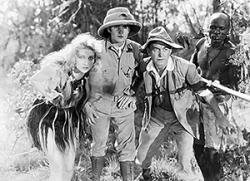 Trader Horn was the first non-documentary Hollywood movie ever shot on location in Africa. It was based on the memoirs of real life explorer Alfred Aloysius Horn, who wrote extensively about his adventures while on safari in Africa. The story has been remade several times and footage from it was recycled for many other jungle set movies, most famously for MGM's Johnny Weissmuller Tarzan series.

The cast and crew suffered for their art. The director, W.S. (One-Take Woody) Van Dyke and many crew members contracted malaria, including leading lady Edwina Booth. She suffered so badly that she couldn't work for the next six years. She sued MGM and they eventually settled out of court. Even worse than that were the two fatalities that occurred during filming. One native crewman fell in a river and was eaten by a crocodile, another was killed by a charging rhino. This last accident was caught on film, and amazingly enough, remains in the finished picture.

Trader Horn definitely took realism in film to a new level. In one scene Harry Carey had to swing on a vine over a stream filled with live crocodiles. He nearly got his leg bitten off. The movie takes advantage of its incredible location shots. There are many scenes where the characters simply marvel at all the wild creatures roaming about them as they traipse through the brush.

The plot involves the titular trader (Carey) and a younger man named Peru (Duncan Renaldo years before he became famous as The Cisco Kid on television) who venture into the wilds of Africa. They meet a woman missionary who tells them about her daughter who was kidnapped by natives as an infant. The main gist of the plot concerns their locating this girl, now a grown woman who is worshiped as a White Goddess by the natives who raised her. They must then escape the jungle with this woman in tow.

There is plenty of action in this excitingly filmed adventure picture. If you can overlook the pervasive racism and patronizing attitude the white characters have towards the blacks then there is plenty to enjoy, even for modern audiences. One example of the film's racism is the fact that is shows the bare breasts of the native women while the white woman's breasts remain covered (albeit barely – this was pre-Code after all) the entire time. Harry Carey, as Trader Horn, calls the natives all kinds of racist names, including Monkey, and Duncan Renaldo says this line to Edwina Booth upon meeting her, “Don't you understand? White people must help each other.”

To be fair the movie does present a genuine relationship between Horn and his African gun bearer Rencharo, played by Mutia Omoolu. He is portrayed as a hero and together he and Horn share the most emotional moment in the movie. It ends fittingly with a tribute to their bond. Sadly, when Omoolu, and another African, came to Hollywood for some re-shoots they were denied admission to the Hollywood Hotel.

Due to some difficulties with the sound in this early talkie there was a need for some aforementioned re-shoots. Some of the animal sequences were re-shot in Mexico, due to that countries' lack of laws concerning the treatment of animals. Reportedly lions were starved in order to make them more viciously attack hyenas and zebras. PETA would most definitely not approve. Trader Horn is a motion picture than wouldn't, and shouldn't, be made today. But as cinematic evidence of a radically different time it is hard to top. As pure entertainment it remains partially successful but so very dated.