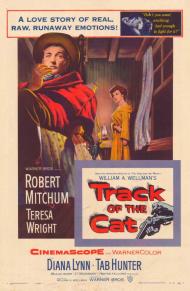 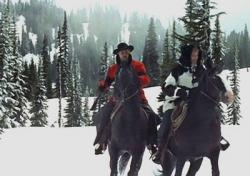 Track of the Cat is sort of a film noir western. Directed by the legendary William Wellman near the end of his screen career, which had begun in the silent era. The movie is interesting cinematically because the background in the outdoor shots is black & white. The only color being the character's clothes which stand out starkly against the background. The movie tells of the wealthy but very dysfunctional Bridges family. They own a ranch in the mountains of the northwest around the turn of the 20th century.

Robert Mitchum stars as Curt the middle of three brothers. He is obsessed with the idea of a mythic black panther said to roam the hills and to appear each year with the first snowfall. William Hopper and Tab Hunter are his older and younger brothers respectively and Teresa Wright plays their soon-to-be old maid sister. The only other people at the house (or in the movie for that matter) are their stern bible quoting mother, their alcoholic father, the girlfriend of the youngest son, and the family's servant Joe Sam, an ancient and mysterious native American who foresees the annual appearance of the cat. He is played by an unrecognizable Carl 'Alfalfa' Switzer from the Little Rascals.

The story begins early in the morning on the day of the season's first snow. The ranchers are awakened by the cries of their cattle. As the sons prepare to go after the suspected panther, and the mom prepares breakfast, it quickly becomes apparent just how troubled this family is. The eldest son is a follower of Joe Sam's and is in the process of carving a cat as a talisman to ward off the real creature. Mitchum is the "man" of the house and is also lusting after Tab's girl. Tab is the young ineffectual son who has yet to come into his own.

The parents are very interesting characters. Beulah Bondi, who may be best remembered as Jimmy Stewarts's mother in It's a Wonderful Life, is a completely different character here. She is a real tough frontier woman quoting the bible but hiding a darker, selfish center. The father (Philip Tonge) gives one of the best portrayals of an alcoholic I have ever seen. He drinks, gets happy, passes out, wakes up and begins again. He doesn't have a clue what is going on with the rest of the family and in his joyous moments breaks into uplifting church songs at incredibly inappropriate moments.

The cat is never shown. Making this more a psychological western than an action one. The ending, while good, will probably not surprise anyone. I have to mention that Tab Hunter was certainly one of the most attractive men ever to grace the silver screen. He is riveting to look at.

Track of the Cat was made in 1954 and remains a very unique and interesting motion picture.

Track of the Cat

It is not only the outdoor scenes that are black and white but every scene, indoor and out. Everyone dresses in black and white clothes, except for Mitchum's red jacket. Everyone's faces and hands are colored but that is it except for an occasional green tree or object that the director wants noted. One scene in particular was when Hunter and the girl are in a room with the open coffin. The opened lid is clearly brown, drawing your attention to it.

The movie is packed with dialogue and famous actors but this is Wellman's movie. He directs it like an art project. In one scene he has Hunter kissing his girl passionately outside. The camera moves from the passionate couple to the bonfire and then up a, standing erect, phallic log. When the brother is buried, the camera angle is from within the grave looking up at the people mourning.

Track of the Cat is an interesting watch but not actually an entertaining one. The movie is about a very close knit family that is coming apart, but the only thing worth mentioning about it is the unique direction. A plot is rendered moot when all that is noticeable is the directing.

The look of this movie is interesting. As my brothers pointed out, it is essentially a black and white movie shot in color, something that director William Wellman apparently had long wanted to shoot. This does create some unique visuals, but does nothing to aid the story. It may have been an interesting exercise for the director, cameraman and cinematographer, but it doesn't improve the entertainment value of this bleak tale.

Mitchum's Curt is the closest thing the movie has to villain, and he's at most unpleasant and a bit of a bully. Beulah Bondi, as the mother, is the truly vile member of the family as the matriarchal mother who rules her children and husband's lives. Tab Hunter as youngest son Harold turns out to be the protagonist, but for most of the movie he's as indecisive as Hamlet. He accomplishes what his brothers couldn't, but he's never given the chance to stand-up to them and it's doubtful that he would have, if given the opportunity.

The only moments of comic relief are provided by Philip Tonge as the alcoholic father. His ability to sniff out hidden bottles of whiskey is akin to the supernatural. No matter where his wife or children hide them, he can sniff them out.

The word my brothers and I keep coming back to is, “interesting” and it's an apt word to describe this movie. I'd never call it entertainment, but it is artistic.