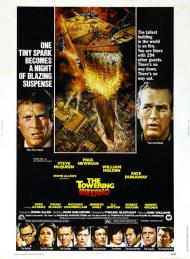 Fred Astaire and Jennifer Jones are the most likable characters.

1974 was the peak year for the all-star disaster movies of the 1970’s. That one year brought us Airport 1975, Earthquake, and The Towering Inferno. Set in San Francisco, this time around the disaster involves a fire in the world’s tallest building, on the very night the building is having it’s christening party in the promenade ballroom on the 135th floor.

This movie follows the same blueprint as The Poseidon Adventure only it takes place in a tall burning building instead of on a capsized ship. Take a group of people played by famous aging movie stars, throw in a couple of children and a ballad by Maureen McGovern, then light a fire and watch them fight to survive. This movie is nowhere near as good as The Poseidon Adventure. Besides the obvious fact that it is a rip-off of that movie it also lacks a good script with characters that you care about.

The cast and some decent special effects are all this movie has going for it. How many movies can boast Paul Newman, Steve McQueen and William Holden? How about Fred Astaire, Faye Dunaway and Jennifer Jones in her last movie role? Richard Chamberlain, Robert Wagner and Robert Vaughn are here too. It also boasts O.J. Simpson, Dabney Coleman and Bobby Brady (Mike Lookinland). Surely a cast for the ages.

McQueen is a fireman, Newman is an architect, Holden is the owner of the building blah, blah, blah. None of them are fully fleshed out characters. Faye Dunaway suffers the most as she is given very few lines, she just gets to kiss Paul Newman a few times. Jennifer Jones and Fred Astaire are the best characters. In one scene they share a dance and the performer in Fred comes eagerly out.

The last hour is pretty entertaining. The action builds to a decent climax and the effects hold up reasonably well. And boy is this a time capsule of the era. This was how cars looked when they still made them in Detroit. This movie is but a curiosity today, watch it for the cast or for the nostalgia but don’t expect too much. 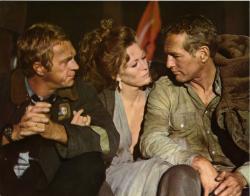 The Towering Inferno was a huge hit upon its release. It was the second highest grossing film of 1974 (behind only Blazing Saddles) and was nominated for 8 Academy Awards including Best Picture and Supporting Actor for Fred Astaire, of which it won three for Cinematography, Editing and Song. However, as Patrick said, it hasn't aged particularly well and today remains mainly watchable only as a curiosity thanks to its all-star cast.

The plot of the film is based upon two different books. Warner Bros. owned the rights to "The Tower", while the master of disaster, Irwin Allen, at 20th Century Fox, owned the rights to "The Glass Inferno". Rather than compete with each other, Allen suggested the two pool their resources to produce one film, with Fox handling the US release and Warners the rest of the world. It was the first such deal of its kind, but one that has since become routine in Hollywood. The combined result of these two similar stories is one very bloated movie. Given how much could have been trimmed with no loss, the Oscar win for Editing seems rather ironic.

Assembling such a big name cast was not without its problems. Steve McQueen had long felt a rivalry with Paul Newman since making his debut in Somebody Up There Likes Me in 1956 in which Newman starred. He supposedly vowed to someday star in a movie with Newman where he would get top billing. Their pairing was to have happened 5 years previously in Butch Cassidy and the Sundance Kid, but when McQueen learned that Newman was to get top billing, he dropped out of the project. On this film, McQueen insisted upon having the same number of lines as Newman and also having the last spoken line. Because McQueen doesn't appear until 43 minutes into the story, this means that for the last 2 hours he dominates the film. As for screen credit, to satisfy their two stars, the studio put their names on the screen at the same time, with McQueen's on the left, but Newman's higher on the right.

Some of the special effects are still impressive. The "miniature" used for the exterior shots of the building was over 70 feet tall. Considering it was made without the aid of computers, makes it even more impressive. The use of models, matte shots, and a very large set makes it appear believably that a skyscraper is on fire. Although, the realism of some of the effects doesn't apply to the logic of the fire's behavior. It begins almost immediately but remains in a small room without spreading or smothering itself for hours. And the method for extinguishing it is equally implausible.

I agree with Patrick that one of the film's biggest problems is the script. Much more time was spent on assembling the sets and setting up the special effects than was ever put into the story. And while no expense was spared in assembling this all star cast, they are almost universally wasted. My brother also called Astaire and Jones the best characters and this is sort of true, but it's more the baggage of the stars that make them so good rather than anything in the story. We see Astaire, not the silly con artist character he's supposed to be playing. It's also interesting that according to another behind the scenes story, while Newman and McQueen were fighting over who would get the most lines and top billing, Astaire and Jones sat uncomplaining in the smallest trailers on the lot.

The other difference between this movie and The Poseidon Adventure that Patrick failed to mention is that The Poseidon Adventure is an hour shorter than this one. At 2 hours and 45 minutes, this movie is unforgivably long. It should have begun at the opening ceremony and thus eliminated the first third of the story. All of the exposition prior to that could have been explained in one 5 minute conversation after the fire began.

Instead of being a classic disaster movie, this one's just a disaster. 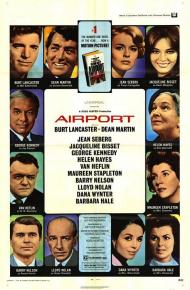 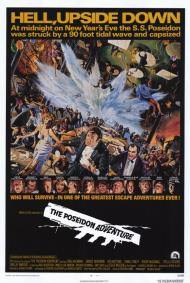 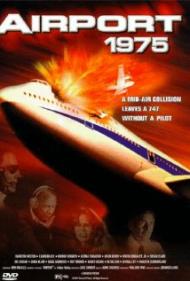 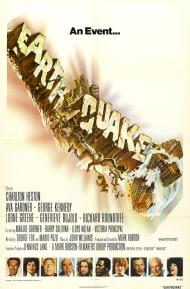