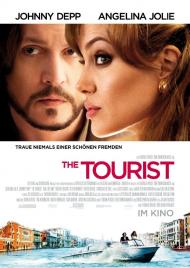 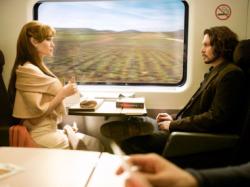 Angelina Jolie and Johnny Depp in The Tourist.

With its plot of an American tourist caught up in an espionage situation in Europe after meeting a mysterious femme fatale on a train, I was reminded of an Alfred Hitchcock film. I was also reminded of just how much better he probably could have made it.

The biggest mistake with the plot is that it gives away most of its secrets in the first five minutes as it sets up the situation.  Angelina Jolie plays Elise, the girlfriend of wanted criminal Alexander Pearce.  Interpol is following Elise in the hopes that she will lead them to Alexander, whom they are unable to recognize because it's believed that he has changed his appearance via plastic surgery.

Elise receives a note from Pearce telling her to get on a train and find someone who looks a bit like him in build and to pretend to know him so that the police will think that this stranger is Pearce.  Elise finds Frank (Depp) and chats him up on the train to Venice.  What follows is a matter of confused identity as the police and some mobsters pursue Frank and Elise through Venice.

A much better way to tell the story would have been to start from Frank's point of view on the train and suddenly have this mysterious woman sit down across from him and then he and the audience could have pieced the story together as the movie progressed.  Who is she?  What does she want?  Why are these men trying to kill her?  Instead we are spoonfed the entire story and there is no mystery left in it, unless you count the final "twist" which frankly is pretty obvious before it ever twists.

Jolie gets to play dress up in the movie and she does a convincing English accent.  She looks the part, except for the fact that she is about 20 or 30 pounds underweight.  When she bears her arms they look like skeleton arms with skin stretched tight over bone.  At least, unlike Salt, her film from earlier this year, we aren't expected to believe that she is a fighter.  She's more the glamourous type here.

The normally eccentric Johnny Depp plays it straight and frankly, rather boring.  You could see Cary Grant in this part if Hitchcock had directed it, but Depp lacks Grant's charm.  He also seems unable to come up with the romantic chops to really sell his relationship with Jolie.  They share a weak chemistry.  And although there are some lighter moments the movie lacks the light touch neccessary to really make it fun.

And that's The Tourist's biggest problem.  It's just not that much fun.  It's got a great cast.  Along with the stars, Paul Bettany, Timothy Dalton and Rufus Sewell all have small parts.  It's got a great and exotic location and even some decent action scenes.  It's just that overall none of that adds up to much charm or sense of fun.  On a side note, it also features what is basically a commercial for e-cigarettes that sticks out like a sore thumb.

Although I was never bored and the story moves quickly along, a movie with this cast and this premise should have been much better than this one. 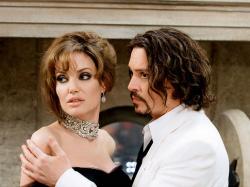 Jolie looks dolled up, while Depp needs to clean up.

As Scott wrote, their is very little actual fun to be found here.  The entire gimmick rests on the plot twists.  It gives away so much early on as it assumes the twists are enough.  They are not.  Once they are revealed, earlier events in the film do not make sense.  I will not give the twists away, but once they show up, you might start to wonder why the characters acted the way they did.  The scene where she happens to be in a boat where he just happens to be near the canal looking at a map, is just one that comes to mind.

The normally very charismatic Jolie looks like a Barbie doll here.  She wears fashionable attire, as she walks around beautiful locations.  She is very skinny.  She wears elbow length gloves and sleeves most of the movie.   Apparently the makers of this film thought her anorexic arms needed covering as well.

I have never been a Depp fan.  Other than Captain Jack Sparrow, I have never been taken in by him.  I have heard women swoon over his looks, but I do not get it.  He is a bit over weight here, and has one of the ugliest hair cuts I could ever image any man having.

The Tourist has two stars at the top of their fame, not talent.  It features a couple of beautiful, yet over used, settings.  Scott compared it to an almost Hitchcock film, and it does have an old fashioned feel to it.  I was reminded of To Catch a Thief, where Cary Grant and Grace Kelly dance around each other in a beautiful French setting, as the audience tries to guess who is telling the truth.  But as Scott also wrote, Depp is no Grant, and for that matter Jolie is not Grace Kelly.  Jolie plays dress up, while Kelly was dress up.