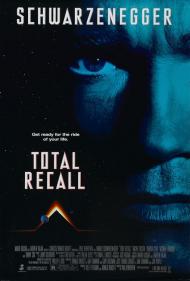 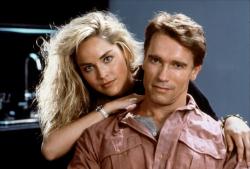 Sharon Stone and Arnold Schwarzenegger in the original Total Recall.

I totally recall enjoying this movie in 1990. This big budget, Sci-Fi adventure featured plenty of action, cutting edge special effects (for the time), and the then biggest movie star on the planet, Arnold Schwarzenegger. It's still fairly enjoyable, if you shut your mind off while watching it, but time hasn't been very kind and it now looks horribly dated.

The plot is loosely based on a short story by legendary Sci-Fi author, Phillip K. Dick. It tells the story of Douglas Quaid, a seemingly ordinary construction worker on earth in the year 2084. He wants to take a vacation to the colony on Mars, but his wife Laurie (played by a never looked better Sharon Stone), doesn't want to go. Instead Quaid goes to a company called Rekall who have the ability to implant the memories of any vacation you want, in this case a Martian one. Quaid even opts to pay for the extra memory of being a secret agent.

This is where the plot gets interesting, or confusing, depending on your point of view. When the technicians implant Quaid's memory, something goes wrong (or does it)? It seems that instead of implanting new memories of his being a secret agent, their procedure wakens memories of him actually being a secret agent. However, what is real and what is the Rekall memory? The answer to that question is left ambiguous. Normally I'm not a fan of that type of ending, but this is such a lightweight action movie that it really doesn't matter. It's all fantasy anyway, so what does it matter if there's an extra layer?

Apart from the fact that it stars Arnold Schwarzenegger at the height of his movie success, the thing that dates this movie the most is the look of it. It's not even that the special effects now look hopelessly dated, although they do. It's more that, typical of the era, the entire movie is brightly lit and too glossy and smooth to be real. This is particularly noticeable in HD. The sets and the props look quite phony. One of the special effects I remember most from watching in 1990 was the triple-breasted whore on Mars, but watching it now her breasts look so fake that it's laughable. And the mutant rebel leader costume is also a joke, as is seeing Schwarzenegger hold his hands while the mutant chants, "Open your mind." The costumes, with their shoulder pads and loose men's suits, also look more 1980s than they do 2080s.

One thing the movie doesn't skimp on is the violence. Reportedly the first cut of the film received an X rating because of it, but it was trimmed to get it down to an R. IMDB lists the body count as 77 and to be honest that seems low. There are several gun battles in public places where it's impossible to determine just how many people are killed. In one of the most graphic scenes, Quaid is riding an escalator with gunmen above and below him. When they open fire, Quaid uses the corpse of the man in front of him as a shield and the body is repeatedly shot, with blood flying everywhere. When the gunfight is over, Quaid drops the body, which is then walked upon by the bad guys.

There's so much violence that it basically becomes a cartoon. No death carries weight and Schwarzenegger has a one-liner for almost every occasion (some of which are truly groan worthy), with his most famous reserved for his wife. One side effect of the brightly lit sets is that the blood is a vibrant red, which just adds to the sense that it's not real.

If you don't ask too many questions, or just accept that it's all a dream so logic and science don't matter, then this is an enjoyable romp. It's dated as hell, but that adds to the cheesy fun of it all.

We'll have to wait and see if the remake, due out later this year, starring Colin Farrell, Kate Beckinsale and Jessica Biel, takes a similar mindless entertainment approach, or if it will try to add some depth to the story. Either way, I'm looking forward to it. 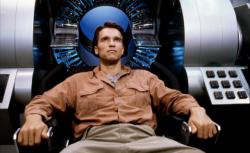 As we now know the 2012 remake took the mindless entertainment approach. All I can say is the original Total Recall may be dated and cheesy but compared to that Colin Farrell version it's a masterpiece. Now technically I agree with Scott but not in spirit. He's right that the movie has aged. The set design screams late 1980s (the shopping mall set with its blue/gray wrought iron railings and overdone neon lighting looks like a dance club I used to attend in those days). The special effects are likewise pretty bad by today's more sophisticated standards. But these flaws enhance the movie more than they harm it. Unlike the remake, that failed in its attempt, this version is great mindless entertainment.

Schwarzenegger strides through the picture the very embodiment of Reagan's American Male. He's a strutting peacock and a walking tank. He kills not for fun but without remorse and, as Scott wrote, with an ever ready quip. It's an attitude borrowed from James Bond but with a body count equal to every Bond movie combined. The violence is cartoon violence but it's shot with a frenetic precision that keeps the story running swiftly through its various twists and turns.

This is the movie that made Sharon Stone a star after years of playing small parts in films and on television. This was two years before her infamous open-legged performance in Basic Instinct would cement her legend in Tinsel Town. She was not only drop dead gorgeous she played man-eating cunts better than any other star of her generation. I wish her part had been expanded on like they did for Kate Beckinsale in the remake. The one thing they got right.

As Scott mentioned, the plot comes from a Philip K. Dick story called "We Can Remember It for You Wholesale" first published in 1966. The basic storyline is the same but they changed the ending for the movie. In the book when the protagonist finally gets his real memories back we learn that he was visited by aliens as a boy. They were so impressed by his empathy and compassion that they decided to delay their invasion of Earth until after his death. He instantly becomes the most important human on the planet. It's a better ending than the one they chose for the movie, although perhaps it's a bit too complicated.

Like my brother I'm not normally a big fan of ambiguous or arbitrary conclusions. Here though it works perfectly. Total Recall is such a live action cartoon that in the end it doesn't really matter if he is truly a secret agent on Mars or just an ordinary guy still experiencing the fake memory of being there. As a quintessential example of big budget summer popcorn fare from an earlier era, that also happens to be highly entertaining action spectacle, Total Recall is hard to top. 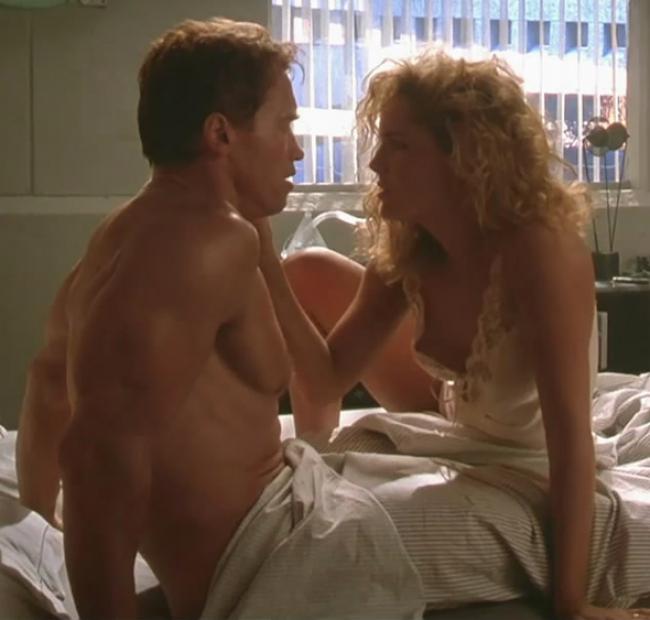 I watched Total Recall with the idea of figuring out whether or not everything that happens to Douglas Quaid is an implanted dream or real. My opinion went one way and then the other and then back again. Finally, I came to the same conclusion as Patrick, it does not really matter. It is not taking itself very seriously so why should the audience?

Total Recall is an audaciously violent, over the top action film. Scott mentioned that some of the violence and gore had to be trimmed for ratings purposes and a couple of times you can tell where the cuts were made, such as when Quaid impales some metal object into a person’s face. I wonder if the original scenes still exist for a possible directors cut?

Again agreeing with my brothers, Sharon Stone is drop dead gorgeous as Lori and she plays the perfect femme fatale. In fact, she is so good that I was rooting for her, the villain, to beat up Melina, the heroine, when the two fight each other. Stone steals every scene, is sexy as hell and the camera likes her. Look at how she purrs to Quaid, “I love you.” Who responds, “Right. That's why you tried to kill me.” Lori coos, “No... I would never do anything to hurt you. I want you to come back to me.” She is so seductive that I may have fallen for her lie.

What makes Stone look even better is the utterly bland Rachel Ticotin as Melina. Sure, she is somewhat attractive but remains as forgettable as an alcohol induced one night stand. I wonder how an actress with so little to offer was given such a big role in a blockbuster film. All I can figure is that they wanted a brunette to Stone’s blonde but could they not find a more exciting dark haired actress than Ticotin. She is given the films sexiest line and renders it completely dull. When Melina first sees Quaid, she grabs his crotch and asks, “What you been feeding this thing?” Referring to Lori, Quaid replies, “Blondes.” Melina then comments dryly, “I think it's still hungry.” Stone could have done wonders with that line.

Of course the film belongs to Arnold Schwarzenegger. One piece of evidence that supports Quaid being an actual secret agent is that he is in amazing shape. Had a thin actor played the part, we would have known it was all a dream. Schwarzenegger has never been considered much of an actor but roles like this were perfect for him. They require plenty of action and minimal dialogue. He is best when only given a few words to recite at any one time, such as, “Look who's talking.” “SCREW YOU!” and “Sue me, dickhead!”

Total Recall does not have the sophisticated special effects of the remake but for my money, it remains a far more entertaining film, in spite of the miscast female lead. 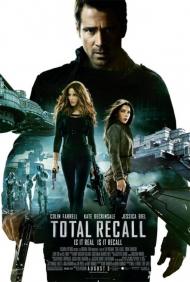